The Biden Department of Homeland Security has taken action to arrest and expel thousands of Haitian and Latin American immigrants who are being detained in squalid and inhumane conditions in the Texas border city of Del Rio. 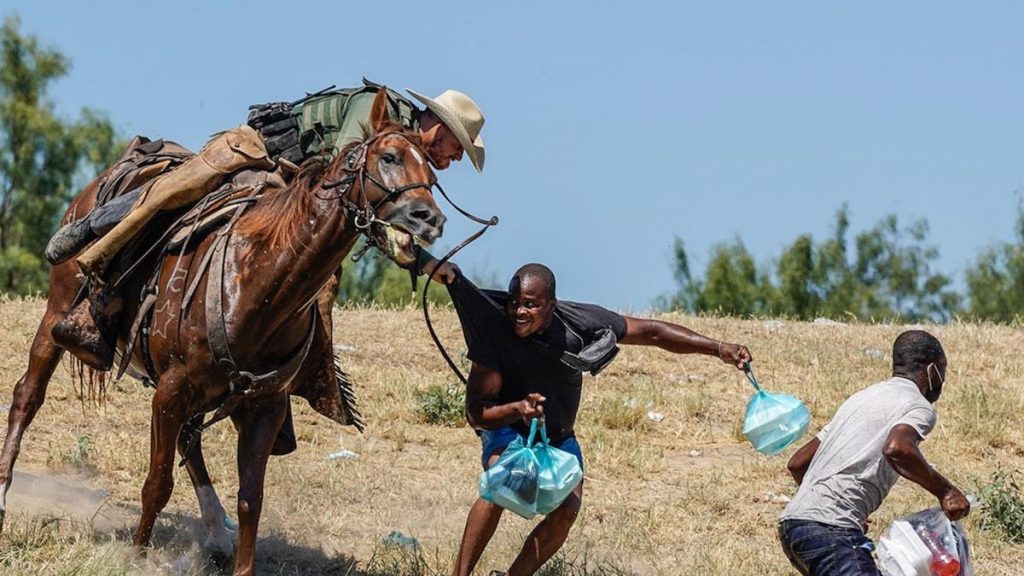 This weekend, the U.S. Department of Homeland Security (DHS) under President Joe Biden began brutalizing and deporting thousands of mostly Haitian immigrants who have crossed the U.S.-Mexico border and camped on the outskirts of Del Río, Texas.

At least 16,000 immigrants have crossed the Río Grande from Ciudad Acuña, Mexico in mid-September. Most are Haitians, joined by some Venezuelans, Cubans, and Nicaraguans. Many carried small children and even infants. Migrants waded through sometimes chest-deep water, carrying their possessions, including food, in plastic shopping bags.

Haiti is the poorest country in the Western hemisphere and has been the target of the worst racism for centuries, before and after the revolution of 1791 to 1804 threw out the slaveholders and achieved independence. In the 1990s, President Bill Clinton jailed and deported tens of thousands of Haitian refugees following a military coup in Haiti. The country’s minimum wage today amounts to an annual income of only $817 — for those Haitians who can get stable jobs. Many of the Haitian refugees arriving today in the U.S. have been migrant workers in South America in countries hit hard by the COVID-19 pandemic. Let’s be clear: closing the borders to Haitians and deporting both adults and children to Haiti is outrageous and deeply racist.

This border crisis comes in a period of crisis for Haiti — after the country’s president Jovenel Moïse was assassinated in July, a 7.2 magnitude earthquake killed nearly 2,000 people in August and left tens of thousands homeless.

Once on the U.S. side, migrants declared themselves to U.S. border guards and hoped to gain asylum. The border guards stopped them from moving further, penning them in and forcing them to camp under the Del Río International Bridge. Most people are sleeping on cardboard, blankets, or dirt. Many have to cross back and forth to buy food in Mexico to bring back to the U.S. side. One Venezuelan father with two children told Reuters, “There is urine, feces and we are sleeping next to garbage.”

On Saturday, the DHS declared it was taking action to arrest and expel the migrants from the camp. By Sunday, Border Patrol announced it had removed 3,300 people who were either deported or jailed, pending deportation. Border Patrol head Raul Ortiz vowed to remove everyone from the camp within a week.

Photographs and videos show that mounted Border Patrol agents brazenly used their horses to herd Black Haitians while twirling and swinging leather horse whips — it’s an image that could have come straight from the 1700’s. They even did this in an attempt to turn back migrants from the camp who bought food in Mexico and were bringing it back to their families who had next to nothing to eat. This is under Joe Biden, who said he opposed Donald Trump’s racism. Now, he is forcibly expelling thousands of Haitians — many of them children — en masse.

On Sunday, the United States deported over 320 people to Haiti on three flights. At least twelve deportees told the New York Times that U.S. agents lied and said the planes were going to Florida. When they realized that they were being deported to Haiti, some migrants protested and guards handcuffed them. Six deportation flights to Haiti are planned every day for the next three weeks in order to remove about 14,000 people. The Haitian government has asked the United States to suspend deportations, saying it cannot provide adequate food or security for that number of people.

Over the weekend, U.S. Border Patrol sent 400 extra officers to Del Río. They are assisted by Texas state police and National Guard troops in carrying out these mass arrests and deportations. Border Patrol is registering migrants in the camp with tracking numbers and separating childless adults from families.

Zareal German, a 45-year-old migrant whose wife is pregnant, told the LA Times, “They don’t care about us — look how we’re living like animals.” Alex Bravener, a 25-year-old with a 3-year-old daughter came all the way from Brazil and has no money left. “We know that we come here illegally, but we are human too, like the president [Biden].”

In 2018, Donald Trump called Haiti, El Salvador, and African nations “shithole countries” and defended the use of tear gas on migrants attempting to cross the border. Today, with a Democratic president, the U.S. state is continuing to expel 16,000 Haitian and other immigrants, and instead of tear gas, there are horse whips.

In May, the Biden administration said it was extending Temporary Protected Status (TPS) for Haitian immigrants within the United States. This legal bar against deporting people to Haiti was enacted after the country’s severe 2010 earthquake in an acknowledgment that the country is unsafe for deportees due to devastation, violence, and dire poverty.

However, TPS is only granted to those who have completed a bureaucratic application process after immigrating to the United States. The U.S. government argues that “removal” of recently arrived immigrants is different from deportation of established immigrants farther from the border.

U.S. imperialism is directly responsible for much of the political unrest and environmental destruction in Haiti today. Now, Biden is carrying out this mass expulsion in the aftermath of a presidential assassination, an earthquake that destroyed or damaged more than 100,000 homes.

Claire Bazille was deported to Haiti with her toddler son. Her mother and six siblings there are homeless. Given the mass unemployment in the country, she said, “I don’t know how I will survive.” Bazille came to the United States. after working for several years as a janitor in Chile.

Biden’s statements and actions on immigration have been full of contradictions.  During a 2019 debate, he accepted the idea that crossing the border without permission should be a civil, rather than a criminal offense. But then he defended the Obama administration’s deportation of 3 million people. In 2020, Biden switched course and began pandering for votes by telling Univision and members of the Congressional Hispanic Caucus that Obama’s mass deportation had been a “mistake.” On the campaign trail, Joe Biden attempted to distinguish himself from Trump by promising a more “humane” immigration system.

Despite his campaign promises, Biden has upheld and deepened the racist immigration system of his predecessor. The organization United We Dream reports that Biden deported more than 597,000 people in his first five months in office. This March, the U.S. Embassy in Haiti tweeted a picture of Biden with the quote, “Don’t come over.”

The Biden administration continued to employ Rule 42 from Donald Trump’s administration, which uses Covid-19 as a cover to authorize immediate deportation of adult immigrants without children, denying them the right to apply for asylum. Biden has also continued Trump’s policy of relying on the Mexican government to repress and jail migrants trying to cross through Mexico using militarized border guards.

As DHS began expelling Haitians, a group of 56 House Democrats headed by Ayanna Pressley, Nydia Velázquez, and Alexandra Ocasio-Cortez (AOC) wrote a letter on September 16 to Homeland Security Secretary Alejandro Mayorkas requesting that he halt deportations to Haiti, release detained Haitians, and selectively allow some Haitians waiting along the border in Mexico into the United States.

Yet even these modest requests ring hollow when looking at the actions of these “progressive” Democrats. On AOC’s and Rashida Tlaib’s first day in Congress in 2019 they both voted Yes on a bill funding the DHS.

The supposedly radical Democrats are not going to organize disruptive mass protests outside of the halls of government against the leadership of their own party. They certainly aren’t going to leave the party or withdraw their support from Biden. Their strategy is a dead end, reliant on begging Democratic officials who operate the deportation machine for sympathy.

While thousands marched into airports at the start of Trump’s presidency to oppose the detention and deportation of people arriving from Middle Eastern countries targeted by the Muslim Ban, the response to the current border crisis is much more muted. The Democratic Party has the effect of kryptonite for internationalism.

What Can We Do?

Just as people flooded airports to protest Trump’s Muslim Ban, activists, unionized and ununionized workers, and youth should march into the San Antonio, Texas airport today and begin a mass sit-in to oppose Biden’s deportation flights to Haiti. We should call on flight attendants, baggage handlers, airline mechanics, and pilots to fold their arms and collectively refuse to drag people back to Haiti against their will.

The working class is international. The U.S. working class cannot build its strength by supporting a capitalist party that oppresses workers from the nations most beaten down by the imperialist division of labor and wealth.

The mass deportations in Del Río show that the domestication of the 2020 Black Lives Matter (BLM) uprising — defused and shunted into the Democratic Party via NGO control and electoral endorsements — has been disastrous. The result of  the liberal U.S. capitalist party is now visible for everyone to see. Mounted federal cops are chasing Black people seeking safety with whips. The millions who rose up against the murder of George Floyd could fight this outrage too, with organized rank and file workers. BLM today being too demobilized to take immediate solidarity action with Haitians against the U.S. government is a condemnation of the strategy of lining up with the Democratic Party.

We must demand open borders for all immigrants and refugees from Haiti, Afghanistan, and all other countries. This includes an equal right to work in the United States, with equal pay and conditions alongside U.S. born workers. By building solidarity, battering down restrictions, and dissolving the Border Patrol will we learn in action how to fight imperialism and our own capitalists at home. For Open Borders! Let Them All In!