We interviewed Delila Paz & Edgey Pires from The Last Internationale. Originally from New York, the band has shown solidarity with popular struggles such as the campaign to Free Leonard Peltier or the fight against the Dakota pipeline. 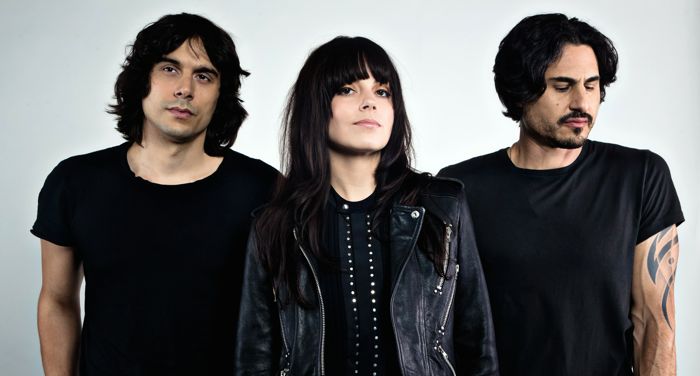 LV: First of all, how did you choose the name of the band (which is fabulous!)?

The name is derived from The Internationale. We feel the name fits our personalities and adds a sense of urgency with what we’re trying to do with our music.

LV: How do you see the interplay between art and politics? How do your politics shape the lyrics of your songs?

We don’t see a difference between art and politics. We’re a band that has never been afraid to mix politics with our vocation, regardless of what the consequences might be. Unfortunately, not many of today’s rock musicians are willing to take the same risk. Playing it safe only produces soulless, boring music and it doesn’t inspire anyone. Politics is treated as a personal hobby or just a complete waste of time, but that kind of self-deprecating world view is simply not realistic. Choosing to be silent in the face of injustice is a political decision, an action that can be interpreted as tacit consent to all the grotesque inequalities and oppression in our society. Our lyrics have always been shaped by our experiences in life and we never felt inhibited to express our opinions despite having been threatened and blacklisted. The worse crime an artist can commit is to be indifferent to suffering.

LV: Do you think art and artists have a special role to play in revolutionary politics? Do you consider yourself a revolutionary militant?

Absolutely. It always has – long before rock and roll. We don’t attach ourselves to political labels because they almost always get misinterpreted. We believe a person’s actions define who they are. We’ve met too many people with lofty revolutionary rhetoric but live completely contradicting lifestyles.

LV: In 2013 you released an EP called “New York, I do mind dying,” ostensibly an allusion to Dan Georgakas’ book, “Detroit, I do mind dying,” (a thorough account of the League of Revolutionary Black workers). Why did you choose that title?

Please Mr. Foreman… Slow down your assembly line
You know I don’t mind workin’
But I do mind dying”

The name of the EP pretty much sums up what we were feeling at the time when we recorded the EP.

LV: How difficult is it to maintain your political principles in the music market? (Has Fireband created a space for bands that are too radical for the mainstream music industry?)

It’s certainly a struggle, but nothing compared to trying to maintain mental sanity. Labels like Firebrand create a supportive community for artists to release their music. Tom Morello has been a great mentor and friend through all of our ups and downs. We must say, though, that the best thing about being an artist today is that anyone can create and put out music on their own and potentially reach millions of people around the world.

LV: There is a topic that is almost impossible to avoid in these times: the bigot in the White House. What’s needed, in your opinion, to build a successful resistance? How do you think of your own contribution to that movement?

Let’s call it what it is: fascism. Fascism needs to be stopped by any means necessary. Our jobs as musicians is to bring people together and encourage critical thinking and action.

LV: Tell us about the coming album you’re recording?

The working title is “Soul on Fire.” We’re currently in Portugal recording it. It’s the album we’ve always wanted to make. We’ve decided to produce it ourselves, without all the creative interferences and restrictions of our debut album.