Predictably, Black talent was excluded from mainstream award shows this year despite its strong presence in film and TV. But your Black socialist cinephiles at Left Voice are excited to share our own picks for Black History Month. 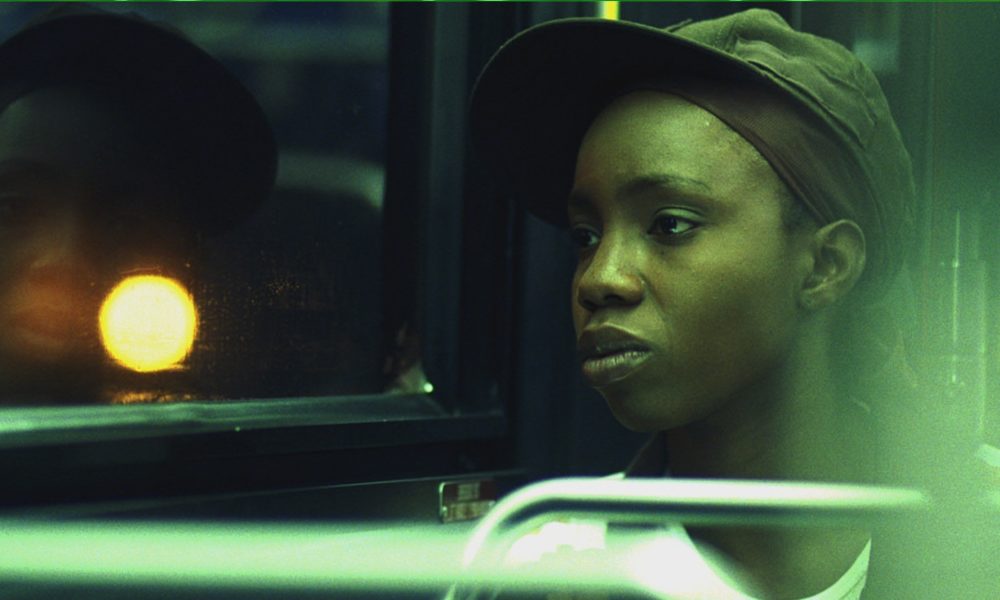 While I am delighted at the well-earned wins for Parasite this year, it can’t be ignored that while the campaign #OscarsSoWhite trended again this year on social media, the Oscar committee continues to ignore Black artists and creatives. This reflects how the model minority myth works: praising certain ethnic groups while condemning and ignoring other people of color; using the “good” ethnic minority stereotype in contrast to the “bad” minorities to prove that systematic oppression does not exist. According to this logic, the system isn’t to blame; there are just “bad” people of color.

Predictably, Black talent was excluded from accolades at mainstream award shows despite its strong presence in film and TV this year. But your Black socialist cinephiles at Left Voice are excited to share our own picks for Black History Month — films created not just this year but in previous years. As we navigate the vicious tentacles of imperialism, capitalism and bigotry, it’s crucial to make time for pleasure, respite and education so we can continue to successfully fight these systems and enjoy the intricate mysteries of the world. The films selected here have inspired, horrified (consensually), amused and encouraged us to raise a fist of resistance in the theater. This is of course in no way an exhaustive list; many great films had to be excluded for the sake of space. This year we even get an extra day out of the shortest month, an extra crumb in a crumby system. How fitting…Lights, camera, black-tion. 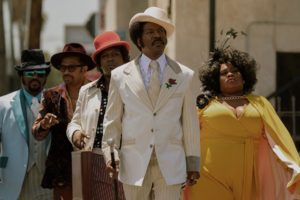 Eddie Murphy stars as Rudy Ray Moore, a real-life actor and performer who created and starred as the titular character Dolemite in the 1970s. Moore starts off working at small clubs doing menial work but has dreams of becoming a singer. His songs don’t take off immediately, but once he opens up to being an entertainer, Moore creates Dolemite. This comedy recounts Moore’s challenges as he attempts, fails, perseveres, and fails again, finally coming out on top to create a film—part 1970s action and X-rated—that hilariously sums up our daily struggles and accomplishments.

Although the actual events took place during the 1970s, this film reminds one of the gig economy today. Working-class folks take numerous jobs we don’t like to struggle for the career we want, despite multiple rejections. Rudy Ray Moore creates a character (Dolemite) who is a slick-talking pimp, which is problematic in its use of Blaxploitation stereotypes and sexist power relationships, but his character also mocks pimping and satirizes Blaxploitation films. Moore himself was not individualistic, nor did he come on to a Black woman with whom he worked closely. Moore supported this actress early in her career for the sake of supporting her, acknowledging her own talents. He brought up his friends with him and shared in collective success even as his solo career was ascending. In the classic words of Chumbawamba, “I get knocked down, but I get up again. Never gonna keep me down.” 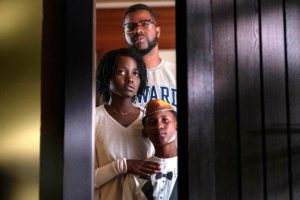 Jordan Peele’s second masterpiece is a marvel, particularly in how it complicates who is the villain, causing the audience to be unknowingly complicit in a structural hierarchy. The “bad guys” are not the menacing monsters who spend the film slashing and terrorizing. In a brief summary, US is about a Black family that visits their beach home in Santa Cruz only to be terrorized by an identical doppelganger Black family called “The Tethered” that hunts them incessantly intent on murder. The tethered are sequestered in tunnels underground throughout the world, seemingly doomed to act out the exact actions of their duplicates above ground.

Although most of the film the audience stays with the first family, dodging the tethered, we later learn that one of the tethered kidnapped her duplicate from an amusement park and lives her life as a regular above ground child.  Because Red, the kidnapped child from above ground has lived her life without the restrictions of repeating the actions of others underground; she is aware that she doesn’t have to be in an underclass system like the tethered and eventually leads the tethered to revolt. Red organizes the tethered toward emancipation in a rebellion reminiscent of Nat Turner’s or more aptly John Brown’s. She even becomes a martyr for the cause, dying at the hands of her tethered kidnapper. Red is a child from above ground, and she leads the tethered partly because she knows she doesn’t have to duplicate the actions of another being, as the tethered are conditioned to do. This exemplifies not white saviorism but international solidarity.

International solidarity requires that people outside imperialist national or bigoted boundaries support struggles they know to be right without erasing the struggles of the oppressed in a self-congratulatory way. Instead they facilitate the acquisition of power by those who have the least. In a capitalist economy, the wealthy are very clear on how they benefit from poverty and bigotry. Capitalists lobby to keep Black people in prison, to keep Brown and Indigenous kids in cages, to bomb, starve, and keep all working-class and poor people on the street or working while living in our cars. The tethered advanced their social standing from beneath, but without the elimination of capitalism or the architects and beneficiaries of the system as a whole, they’ll be in the same position as the above ground people; struggling to survive. We don’t think it’s a coincidence that the leader of the movement is named Red, because she leads a bloody liberation of the literal underclass. 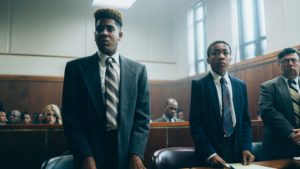 One of the best things about horror films is the terror we consent to enjoy. We’re removed from the subject matter by the fictitious nature of the genre. When They See Us is not that, and that’s why it’s so difficult to watch. True stories about the horrific reality of institutional racism make this film more disturbing than watching people endure a violent ordeal in Us. When They See Us, a miniseries, is a fictional account of the Central Park Five case, in which five boys were illegally interrogated without their parents and proper counsel for the rape of a white woman jogging in Central Park in April 1989. The film follows the police arrest, interrogation, prosecution, wrongful imprisonment, and subsequent criminal charges that follow each child as they grow into adulthood. In some cases, the convictions prevented the youths from gaining legal employment. A few of them are compelled to engage in illegal employment, lengthening their time in prison. The lens focuses on the children and reveals the tactics used by the police and prosecution to frame them. Not only was the case a racist prosecution of innocent children, but the state ultimately allowed the rapist to remain unidentified for years while the victims lost dozens of years of their own freedom. As with atrocities throughout U.S. history, the state was more interested in framing Black children than in establishing justice for rape victims. One of the people whose DNA matched the rapist’s went on to rape four more women and killed another woman. The Central Park 5 are all free now, but it’s a heartbreaker. 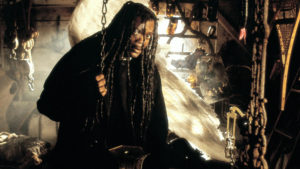 Samuel L. Jackson plays Romulus, a man suffering from mental illness who lives in a cave in a New York City Park and ends up solving a murder. It’s an incredible film in its depiction of persecutory delusions, a psychological condition in which a person thinks people or entities are out to harm them. A unique quality of this film is that it shows the intricacies of living with a mental health condition. Even though Romulus is convinced that Stuyvesant, an invisible man who lives in the Chrysler Building; controls the world through what Romulus calls Z-rays and naked moth seraphs (the manifestation of Romulus’s anxieties and negative thoughts). He is not entirely wrong to think that there are forces beyond his control influencing society. The police do not believe or investigate thoroughly the murder of a homeless gay man, which leads Romulus to try to find the real killer. Nor do the police do anything to support the victim’s partner, who is later assaulted after going after the killer. Society favors the rich, and Romulus repeatedly points out class inequality throughout the film. It’s a great story, one that we rarely see on screen, and it’s refreshing to see a Black person with disabilities demonstrate heroism in a way that isn’t patronizing but empowering. 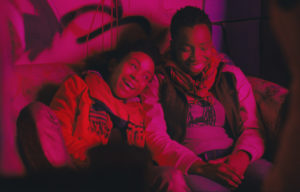 All-ages films are essential to developing and supporting LGBTQAI youth, particularly Black youngsters. Pariah, directed by Dee Rees, depicts the coming-of-age story of Alike, a Black preteen of working-class parents who is just discovering her sexuality and gender identity. It’s filled with social faux pas and uncertainty as she tries to learn what she parts of her life she can trust her parents and friends with her parents and with her friends in addition to parental struggles at home. She tries on different outfits and even has a first kiss. It’s awkward and sweet, a gentle, tearful reminder of the adventures of youth. As with all growing pains, not everything is linear, and not all exploration is fruitful. The girl she crushes on has casual feelings for her, and some people in the rainbow community hold her to rigid standards of “butch” behavior. On the other hand, there are people in her community and circle who support her throughout her journey. Although we explore the emotions and experience of being a pariah, the film concludes with hope and acceptance. 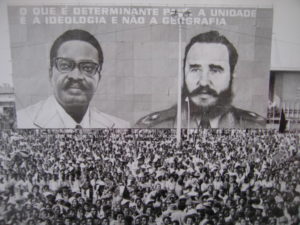 One of my favorite documentaries, Cuba: An African Odyssey, created by a Black French-Egyptian woman and director born in Lebanon, Jihan El-Tahri, chronicles the participation of the Cuban government in overthrowing imperialist governments in multiple African countries during the 1960s. It’s one of the most epic depictions of international solidarity between diasporic Black people that I have ever seen. Under the leadership of Che Guevara, Black Cuban soldiers begin their journey in the Congo after leftist Patrice Lumumba was assassinated by the CIA-backed Mobutu Sese Seko. The film starts in the Congo, but Cuban soldiers went to Guinea-Bissau, Tanzania, and Angola, ultimately fighting off the encroaching apartheid of South Africa. The Black Cuban soldiers also tangled with African troops who by virtue of being anti-Communist and antisocialist, militarily defended the apartheid system. We have the pleasure of hearing firsthand accounts from Black Cubans, African socialists from a variety of countries and the African troops who defended apartheid to support national capitalism. The bloc of African and Cuban soldiers helped overthrow multiple European imperialist governments and eliminate the legalized slave state system throughout the continent of Africa. After watching this inspirational true story of united Black and Brown people across the globe, who try to make an international socialist economy of workers and the oppressed, one feels that such an endeavor is within our grasp. These revolutions were just a generation ago. Linguistically diverse and revealing international diasporic solidarity, this film has a truly  revolutionary spirit.