Mutual aid networks have been emerging during the COVID-19 pandemic. This is a comradely critique of mutual aid as a political strategy, putting forward socialist alternatives. 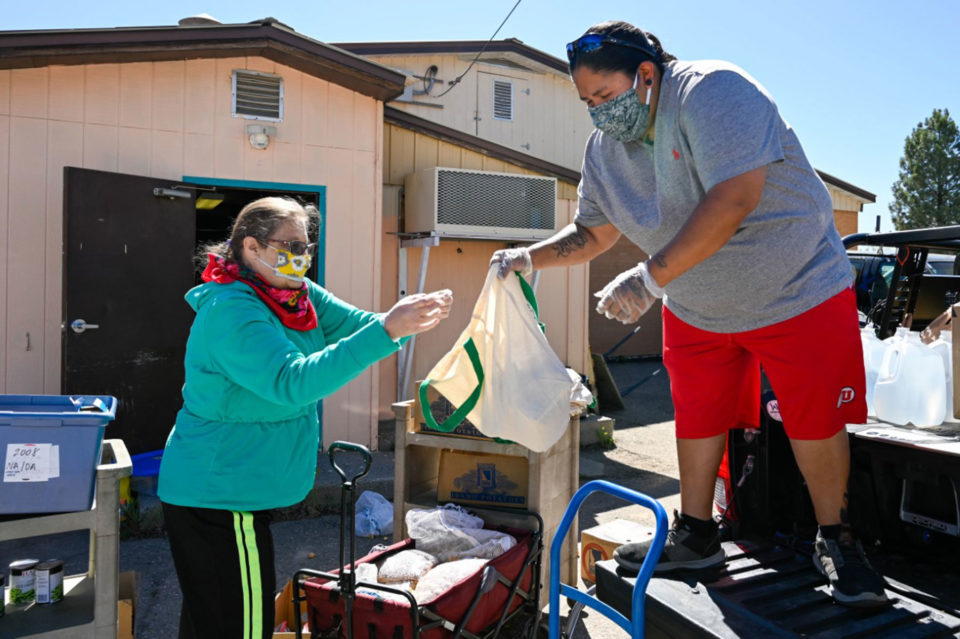 Mutual aid organizations have appeared all over the country in response to coronavirus and the economic shutdown. Very often these organizations are vital, keeping people alive and putting food on the table for families that would otherwise go hungry.

Many of the best activists are currently involved in mutual aid work. The extent to which I understand the importance of these organizations is illustrated by my involvement with the one in my neighborhood where I’ve helped with grocery runs for undocumented immigrants and donated some of my stimulus money to keep the organization going. The organization in my neighborhood has raised over $30,000 and has delivered food and essential aid to an impressive number of our neighbors.

While these efforts are incredibly important, we cannot forget that they should be unnecessary. Capitalism and the state that supports it are responsible for a situation in which millions are suffering from privation. In this crisis, the state has been primarily concerned with the maintenance and health of capitalism and has provided only scraps to the vast majority, even as it spends generously to rescue the wealthy. Mutual aid groups have formed to fill this void left by the state’s total disregard for the survival of the most vulnerable.

But since these projects often depend upon us sharing our meager resources, they can be very difficult to maintain. The group in my neighborhood, for example, despite its impressive fundraising, is having difficulty continuing its efforts as new donations dry up. If the left were organized and strong, instead of having to scramble to provide these resources for ourselves, we would be able to apply material pressure and demand them from the state and the wealthy elite that the state protects.

Looking at the origins of mutual aid philosophy is illuminating. Mutual aid derives from the political philosophy of Anarchism. The term “mutual aid” comes from the anarchist Peter Kropotkin’s 1902 book of the same name, which sought to explore how cooperation, what Kropotkin called “mutual aid,” was “a factor in evolution.”

The issue at hand bears some similarity to a debate going back to the mid-19thcentury between Marx and Pierre-Joseph Proudhon. Proudhon was a utopian socialist and the father of modern anarchism. Proudhon believed that a new, post-capitalist society could be created alongside capitalism and slowly grow to the point where it became dominant. This process, he believed, could happen in a decentralized way. Marx, by contrast, judged that the capitalist state would never allow this to happen, and would attempt to destroy and undermine these forms of collective care. He argued that the state must be challenged with a fighting organization of the working class. This organized resistance can put pressure on the state and the wealthy, forcing them to provide resources that ordinary people need. But, for Marx, a better society could only come when our forms of organization were strong enough to directly confront the state and replace it with something better.

What’s at stake today is something similar. While acts of solidarity and mutual aid organizations are extremely important, there are limits to what they can achieve inside capitalist society. Organized solidarity entails not just sharing our limited resources between ourselves, but fighting to take them from the rich, whether directly, or indirectly through political demands on the capitalist state. In order for this to be a political movement, and not just a form of charity, organized acts of solidarity and demands on the state need to be made in ways that build class consciousness and organization.

Many socialists have taken on the language and strategy of mutual aid wholesale. In doing so they have unconsciously adopted an anarchist theory of social change and the state. The anarchist theory argues that placing demands on the state only recognizes its authority, strengthens it, and weakens the workers’ movement. Revolutionary socialists, by contrast, share the anarchist opposition to the capitalist state, but think the anarchist approach of ignoring or attempting to circumvent the state is wrong. We believe that the organized working class must engage with and make demands upon the state, while avoiding the social democratic trap of working exclusively through the state, and relying on its reforms. Workers can only achieve a better society by building it for ourselves, brick-by-brick, from the bottom up.

For instance, revolutionary socialists, anarchists, and social democrats can work together with tenants in supporting realistic rent strikes during this time of mass unemployment, and mutual defense against evictions —sometimes cited as a form of mutual aid. But it is also a political act to extend these pressures to demands on the state for a blanket end to evictions, and for rent and mortgage cancellation or moratoriums.

“Occupy Sandy” provides a revealing illustration of the merits and limitations of mutual aid work. During the hurricane, a number of New York activists previously involved with “Occupy Wall Street” organized themselves into “Occupy Sandy” around a politics of “mutual aid, not charity.” The group was involved in a lot of important work and provided crucial help to people who were impacted by the storm. However, the political distinction between mutual aid and charity was not always clear to those giving or receiving aid. And despite all its impressive efforts, getting the electricity back on and the subways running ultimately depended upon the state. When the crisis ended, the group left no form of organization behind.

The scale of the crisis today is orders of magnitude larger than it was during the hurricane in 2012, and a much larger portion of the working class has been impacted. The government is currently spending trillions of dollars to prop up banks and corporations. Working people, who create all the wealth in society, need to be getting a share of that. We need to develop strategies that not only spread our limited resources around, but reappropriate what the wealthy have taken from us.

Labor unions, where working people are organized and have leverage against the bosses and corporations, are crucial in the battle for wealth redistribution. An illustrative example comes from the experience of workers in the airline industry. The recent bailout provided the industry with $75 billion. When workers learned this was happening, they organized to ensure that this money would go to help workers and their families get through the crisis. The Flight Attendants Association, led by Sara Nelson, was able to force the airlines into setting aside $29 billion for their workers. This will help pay salaries through the end of September. In a commendable display of solidarity, the union fought for a portion of this aid to go to airport workers as well. The airline workers displayed a willingness to use their power to secure what they needed from their employers. More union actions like this — especially if they were to include greater direct involvement from rank-and-file airline workers — could not only win important material gains, but would also strengthen working class self-organization for future battles against the state and corporations.

Combative Social Movements Will Get Us the Goods

In order to be effective, resistance cannot be the province of a revolutionary minority alone. Since capitalism is creative to the same degree that it is destructive, it tends to breed resistance among people of all walks of life — revolutionary and non-revolutionary alike. It is the role of revolutionaries not to take over these movements, but to intervene and fight alongside those affected in order to win them over to revolutionary politics. Mutual aid networks can be a starting point for people who are radicalizing, but they are most effective when connected to wider movements for change, not seen as an end unto themselves.

We need to build social movements that strive not only to redistribute the few resources available to us, but which also work to reappropriate from the rich the wealth they have taken from us. These movements can translate material pressure into material resources for the majority. They can secure concessions such as medicare-for-all and the inclusion of the undocumented in government aid programs. Bernie Sanders had proposed $2,000 per month for everyone for the duration of the crisis. This is a proposal  that combative mass social movements could have the power to actually secure.

Organization, defined as mass involvement, solidarity, and unity-in-action toward a common goal, is the only tool that can give us enough power to take on capital and the state. Without it, we risk just papering over the cracks in capitalism. Only with this tool can we move toward a society based not upon mindless profit for a few, but upon meeting the needs of all. This will allow us to eliminate the conditions that make mutual aid groups necessary, and construct a society based upon solidarity.

First published on June 29 on marx21us.org