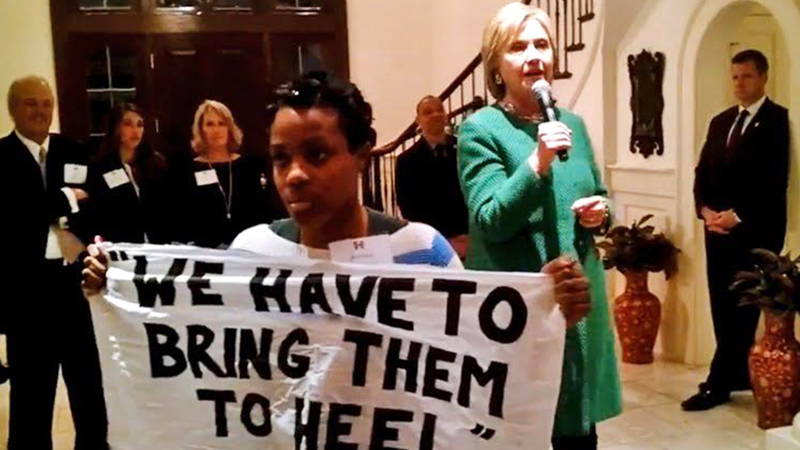 For many Black folks this has been a difficult election year to stomach. We have two candidates that we would prefer were not on the ticket. Many Black American icons and leaders hesitated to endorse either candidate. Yet, one by one, many came out of the woodwork in support of Clinton.

A couple of weeks ago, on the Bishop TD Jakes Show, Oprah Winfrey endorsed Hillary Clinton for president. She explains that there isn’t really “a choice” between this elections candidates- claiming that Hillary is the only viable alternative. Winfrey begins to imitate having conversations with an indecisive voter who arguably has the mannerisms of a Black woman, “I just don’t know if I like her.” To that the media mogul responds, “she not coming over to your house.” She argues that you don’t need to like Clinton, you don’t need to invite her over to your house, you just need to vote for her. With all due respect Ms. Winfrey, Hillary has been in our house in more ways than one.

If we go back to 1994 (we can go even further), she was one of her husband´s biggest supporters when the then president Bill Clinton signed the biggest crime bill in history, the 1994 Violent Crime Control Act. In 1996 she labeled young Black males as “superpredators,” with “no conscience, no empathy, we can talk about how they got that way, but first we have to bring them to heel.” Twenty years later it’s not just young black kids anymore, it’s the entire Black community that is facing far harsher criminal punishments than their white counterparts.

The outcome of the bill (the false statistics and the rhetoric behind it) sent law enforcement and the nation as a whole into a panic. There was no correlation between the increasing arrests of Blacks and the declining crime rate. Michelle Alexander, as law professor and author of The New Jim Crow: Mass Incarceration in the Age of Colorblindness, points out that the bill that Mrs. Clinton supported denied drug offenders the financial aid needed to reestablish themselves in society. It was a bill that banned those with criminal records from obtaining public housing.

The rationale of the bill was to be “tough on crime.” However, the same year Clinton passed the bill criminal theorist James Q. Wilson admitted that “very large increases in the prison population can only produce modest reductions in crime rates.” This is the same Wilson who created the Broken Windows Theory, which increased policing and gentrification. He knew that Clinton’s crime bill would not address “crime.” This is something that progressive researchers and theorists had also been saying. The bill doesn’t work, but by then it was too late and fell on deaf ears.

To whoever was listening, Mrs. Clinton also showed support for another bill, the 1996 welfare reform bill known as the Personal Responsibility and Work Opportunity Act. In her memoir, Living History, Clinton proudly boasted of support for this bill, which robbed poor families of the safety net they had depended on since the New Deal. The poster girl for the bill was Lillie Harden, a Black single mother from Little Rock, Arkansas who said that the bill helped her to go from welfare to work. On a stage at the White House, Harden and politicians watched as Clinton signed the bill.

Progressives vehemently opposed this bill and led some Clinton appointees to resign when it passed. In 2002, Harden got a stroke and could not afford her $450 monthly prescription bills, something she once could have had before the bill passed. Before her death in 2014, Harden reflected on her role in the signing of the bill, “It didn’t pay off in the end.” Harden’s story isn’t an isolated case. Many others across America were denied services that were once attainable. Under the bill public welfare funding decreased by $54 billion.

So…let’s look again at the Black houses that “Hillary “ain’t coming to.” The men are being profiled, arrested and wrongly convicted, being tossed out of the household. They’re kept from being with their families and loved ones. When they are released they have difficulty improving their situation. Unable to get a job due to employment discrimination against the formerly incarcerated, unable to get public housing and unable to even vote, formerly incarcerated Black men have a hard time getting by. The rest of the household is trying to make a dollar out of fifteen-cents and if there is a medical emergency, their safety net is nowhere to be found and their livelihoods are jeopardized. It seems as though Clinton, without setting foot in the household of millions of Black Americans, has left an unmistakable footprint.

So the reluctance of many Black Americans to vote isn’t because she doesn’t know how to “dab” or that she looks like a complete fool whipping and nae-naeing. It is because there are a few generations with voting power who have had the unpleasant experience of what Mrs. Clinton has to offer in their household through legislation. Clinton denied access to education, denied access to housing, and denied access to healthcare. Not even mentioning her foreign policy or record around immigration. We know what it means to have a Clinton in the White House.

Well, what about her being the “lesser of two evils?” A child of Satan is a child of Satan and the devil and his offspring are not welcome in my house.

Kashema Hutchinson is currently working on her PhD in Urban Education. She has interests in mindfulness and mattering in urban education as well as culturally sustaining pedagogy.