“My Third Christmas under Lock and Key”: A Letter by Rosa Luxemburg

Below is a beautiful letter written by revolutionary socialist Rosa Luxemburg from her prison cell in Breslau prison around Christmas 1917. Rosa writes to Sophie Liebknecht, wife of fellow German revolutionary Karl Liebknecht, and discusses her love for life despite spending her third Christmas imprisoned. 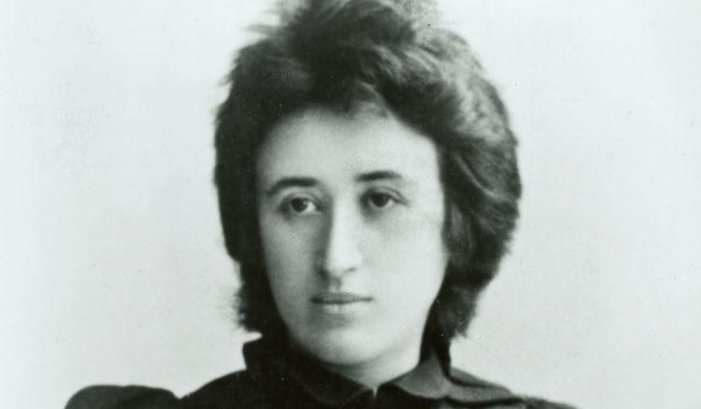 Rosa Luxemburg was a Polish-born revolutionary socialist, Marxist theoretician, and leader of the German working class. Luxemburg and fellow revolutionary Karl Liebknecht were assassinated by right-wing paramilitary Freikorps on the orders of the SPD government in 1919.

You may be interested in: The Politics of Red Rosa

Karl has been in Luckau prison for a year now. I have been thinking of that so often this month and of how it is just a year since you came to see me at Wronke, and gave me that lovely Christmas tree. This time I arranged to get one here, but they have brought me such a shabby little tree, with some of its branches broken off, – there’s no comparison between it and yours. I’m sure I don’t know how I shall manage to fix all the eight candles that I have got for it. This is my third Christmas under lock and key, but you needn’t take it to heart. I am as tranquil and cheerful as ever. Last night I lay awake for a long time. I have to go to bed at ten, but can never get to sleep before one in the morning, so I lie in the dark, pondering many things. Last night my thoughts ran thiswise: “How strange it is that I am always in a sort of joyful intoxication, though without sufficient cause. Here I am lying in a dark cell upon a mattress hard as stone; the building has its usual churchyard quiet, so that one might as well be already entombed; through the window there falls across the bed a glint of light from the lamp which burns all night in front of the prison. At intervals I can hear faintly in the distance the noise of a passing train or close at hand the dry cough of the prison guard as in his heavy boots, he takes a few slow strides to stretch his limbs. The gride of the gravel beneath his feet has so hopeless a sound that all the weariness and futility of existence seems to be radiated thereby into the damp and gloomy night. I lie here alone and in silence, enveloped in the manifold black wrappings of darkness, tedium, unfreedom, and winter – and yet my heart beats with an immeasurable and incomprehensible inner joy, just as if I were moving in the brilliant sunshine across a flowery mead. And in the darkness I smile at life, as if I were the possessor of charm which would enable me to transform all that is evil and tragical into serenity and happiness. But when I search my mind for the cause of this joy, I find there is no cause, and can only laugh at myself.” – I believe that the key to the riddle is simply life itself, this deep darkness of night is soft and beautiful as velvet, if only one looks at it in the right way. The gride of the damp gravel beneath the slow and heavy tread of the prison guard is likewise a lovely little song of life – for one who has ears to hear. At such moments I think of you, and would that I could hand over this magic key to you also. Then, at all times and in all places, you would be able to see the beauty, and the joy of life; then you also could live in the sweet intoxication, and make your way across a flowery mead. Do not think that I am offering you imaginary joys, or that I am preaching asceticism. I want you to taste all the real pleasures of the senses. My one desire is to give you in addition my inexhaustible sense of inward bliss. Could I do so, I should be at ease about you, knowing that in your passage through life you were clad in a star-bespangled cloak which would protect you from everything petty, trivial, or harassing.

I am interested to hear of the lovely bunch of berries, black ones and reddish-violet ones you picked in Steglitz Park. The black berries may have been elder – of course you know the elder berries which hang in thick and heavy clusters among fan-shaped leaves. More probably, however, they were privet, slender and graceful, upright spikes of berries, amid narrow, elongated green leaves. The reddish-violet berries, almost hidden by small leaves, must have been those of the dwarf medlar; their proper colour is red, but at this late season, when they are over-ripe and beginning to rot, they often assume a violet tinge. The leaves are like those of the myrtle, small, pointed, dark green in colour, with a leathery upper surface, but rough beneath.

Sonyusha, do you know Platen’s1 Verhängnisvolle Gabel?2 Could you send it to me, or bring it when you come? Karl told me he had read it at home. George’s poems are beautiful. Now I know where you got the verse, %#8220; And amid the rustling of ruddy corn”, which you were fond of quoting when we were walking in the country. I wish you would copy out for me The Modern Amades3 when you have time. I am so fond of the poem (a knowledge of which I owe to Hugo Wolf’s setting) but I have not got it here. Are you still reading the Lessing Legende? I have been re-reading Lange’s4 History of Materialism, which I always find stimulating and invigorating. I do so hope you will read it some day.

Sonichka, dear, I had such a pang recently. In the courtyard where I walk, army lorries often arrive, laden with haversacks or old tunics and shirts from the front; sometimes they are stained with blood. They are sent to the women’s cells to be mended, and then go back for use in the army. The other day one of these lorries was drawn by a team of buffaloes instead of horses. I had never seen the creatures close at hand before. They are much more powerfully built than our oxen, with flattened heads, and horns strongly recurved, so that their skulls are shaped something like a sheep’s skull. They are black, and have large, soft eyes. The buffaloes are war trophies from Rumania. The soldier-drivers said that it was very difficult to catch these animals, which had always run wild, and still more difficult to break them in to harness. They had been unmercifully flogged – on the principle of “vae victis”5. There are about a hundred head in Breslau alone. They have been accustomed to the luxuriant Rumanian pastures and have here to put up with lean and scanty fodder. Unsparingly exploited, yoked to heavy loads, they are soon worked to death. The other day a lorry came laden with sacks, so overladen indeed that the buffaloes were unable to drag it across the threshold of the gate. The soldier-driver, a brute of a fellow, belaboured the poor beasts so savagely with the butt end of his whip that the wardress at the gate, indignant at the sight, asked him if he had no compassion for animals. “No more than anyone has compassion for us men”, he answered with an evil smile, and redoubled his blows. At length the buffaloes succeeded in drawing the load over the obstacle, but one of them was bleeding. You know their hide is proverbial for its thickness and toughness, but it had been torn. While the lorry was being unloaded, the beasts, which were utterly exhausted, stood perfectly still. The one that was bleeding had an expression on its black face and in its soft black eyes like that of a weeping child – one that has been severely thrashed and does not know why, nor how to escape from the torment of ill-treatment. I stood in front of the team; the beast looked at me: the tears welled from my own eyes. The suffering of a dearly loved brother could hardly have nursed me more profoundly, than I was moved by my impotence in face of this mute agony. Far distant, lost for ever, were the green, lush meadows of Rumania. How different there the light of the sun, the breath of the wind; how different there the song of the birds and the melodious call of the herdsman. Instead, the hideous street, the foetid stable, the rank hay mingled with mouldy straw, the strange and terrible men – blow upon blow, and blood running from gaping wounds. Poor wretch, I am as powerless, as dumb, as yourself; I am at one with you in my pain, my weakness, and my longing.

Meanwhile the women prisoners were jostling one another as they busily unloaded the dray and carried the heavy sacks into the building. The driver, hands in pockets, was striding up and down the courtyard, smiling to himself as he whistled a popular air. I had a vision of all the splendour of war! …

Never mind, my Sonyusha; you must be calm and happy all the same. Such is life, and we have to take it as it is, valiantly, heads erect, smiling ever – despite all.

This letter was originally published on December 16, 2008 on Marxists.org.