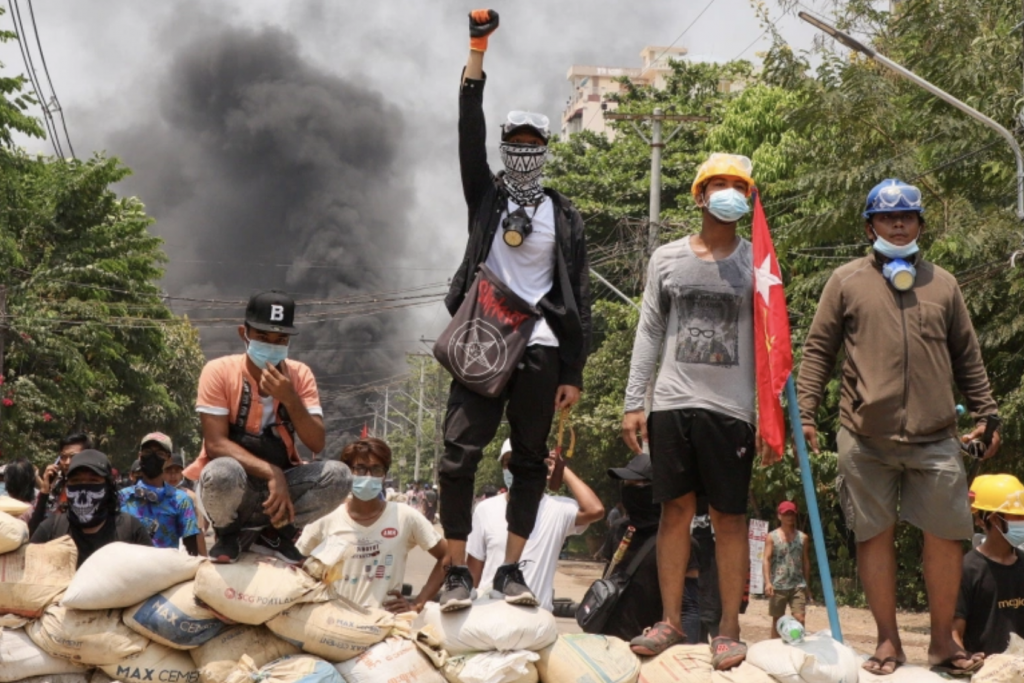 The Myanmar military regime massacred 100 people in more than 40 locations throughout the country on Saturday. This show of force took place on Myanmar’s Armed Forces Day and was the largest and deadliest day of protests against the country’s coup regime.

The exact number of deaths may be higher because the military is cutting off communication and official information from the country. This is part of their attempt to suppress the protests.

What is clear is that protests led by the country’s working class are part of a strong resistance against the military regime who is coordinating with civilian paramilitary gangs to attack protests. Some images of these attacks have broken through the military’s crackdown on communication and can be found on social media and in dozens of publications.

Estimates of Saturday’s death toll include a tally of 93 by an independent investigator in Yangon, the country’s largest city, and a report of 114  dead by the news outlet Myanmar Now.

If these estimates are correct, then the Saturday massacres make up a third of the approximately 320 deaths since the beginning of pro-democracy protests.

Despite the brutal repression and massacres carried out by the military, the resistance is standing strong. Funerals have become a political act with thousands of people attending each one in rejection of the coup.

KNU did the candlelight vigil for fallen heroes. We can’t thank you enough for your service and sacrifices.
ANTIFASCIST REVOLUTION #AntiFascistRevolution2021 #WhatsHapppeningInMyanmar #Mar27Coup pic.twitter.com/CrhgEmuRz4

Factory workers in the textile industry, one of the country’s most important industries, have been on strike as a tactic of resistance. Workers have also blocked the country’s banking sector, ports, and commerce.

Women have played a key role in the textile strike. The factories, which produce some of the world’s biggest brands, have a workforce that is 90% women. Since the beginning of the coup, these women workers have been on the frontlines of the protests and leading the organization of their factories.

Thousands of young people and students radicalized by the coup have also been joining the workers in opposition to the coup. These young people have been quick to learn defense tactics from their confrontations with the military. Protesters now make use of barricades, shields, and homemade weapons.

Many protestors are also fighting back against the xenophobia and Islamophobia of both the military regime and the imprisoned former leader of Myanmar, Aung San Suu Kyi of the National League for Democracy (NLD). In several cities, the demonstrators have emphasized their solidarity with Muslim protestors.

The situation in Myanmar is further-complicated by the geopolitical interests of surrounding countries. China in particular has significant economic interests in Myanmar and initially supported the military crackdown on the protests. However, far from the quick return to calm that China had hoped for, the crackdowns have only generated even bigger protests and have also led to an anti-China sentiment among the demonstrators.

Japan and India, two key allies to the United States’ bid for greater control over the Asia-Pacific, have done more to hide their communication with the regime, unlike China. Japan’s and India’s behavior contrasts with that of their military allies, the United States and Australia. Together, these four countries make up “The Quad” alliance in the Indo-Pacific which primarily exists to keep China’s regional influence from growing. The United States and Australia have publicly denounced the regime and sanctioned some of its leaders.

Many protesters still rely on appeals to the imperialist powers for intervention and on a return to normalcy under Suu Kyi and the NLD. However, the demands that have been brewing among the demonstrators go beyond the NLD’s program. While in power, the NLD refused to put an end to the privileges of the military, carried out a neoliberal and privatization policy toward the workers, and fueled the genocide of Muslims with a particularly xenophobic rhetoric.

The power that the resistance has been gaining, the unity among the different sectors engaged in the struggle and the radical nature of their demands, which already go beyond a simple return to a civilian government, require the development of the methods of strike and self-defense, with total political independence from both the imperialist powers and the conciliatory policies of the NLD.

First published in Spanish on March 27 in La Izquierda Diario