While the military in Myanmar had hoped to seize power without much difficulty, the working class, alongside other popular sectors, has responded with increasingly militant demonstrations. These demonstrations raise questions about the strategic consequences of the coup on a national, regional, and global level. 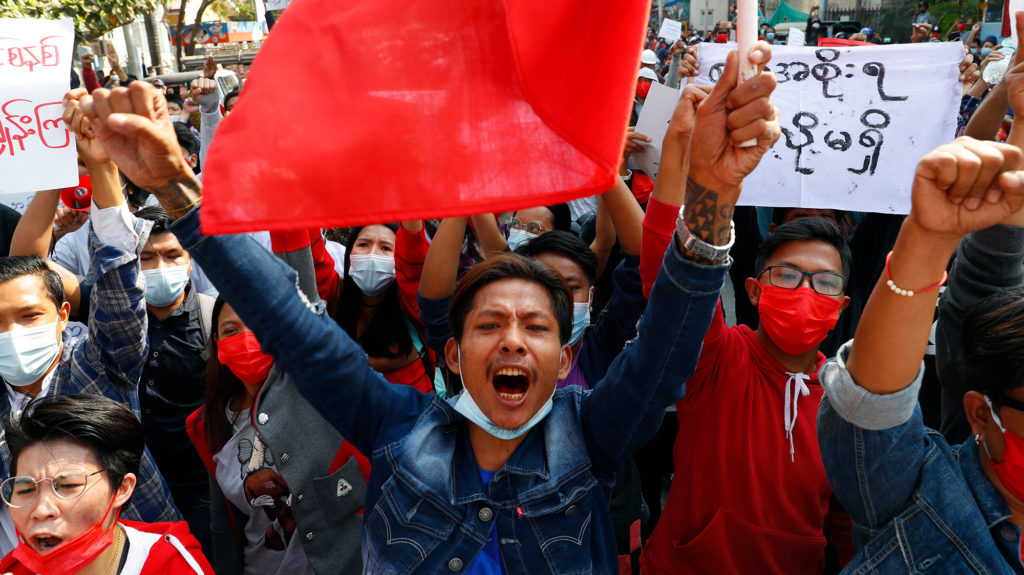 Since Saturday, a strong popular opposition has been growing in Myanmar against the military coup d’état that occurred February 1. Thousands of demonstrators have invaded the streets of Rangoon and other cities in the country. Workers have been on the front lines of several of these demonstrations, especially workers from the textile industry, young people, employees of various ministries, teachers, and civil servants.

Amid the government’s repression of the movement, a woman was shot and injured in Naypyidaw, the capital of the country. She was in critical condition and was reportedly declared brain dead. At the same time, there have been several reports of desertions among the police forces.

The situation is becoming a nightmare for Myanmar’s military, which had hoped to seize power without too much trouble. Now they fear that a further destabilization of the social and political situation could lead to the withdrawal of certain investments, the delay of projects, or even the outflow of capital, as well as economic sanctions imposed by international powers. In addition, some international companies have already announced the suspension of their activities in the country or their departure. New Zealand was the first country to cease diplomatic exchanges with the military government.

The military may believe that the flood of foreign investment that has made Myanmar one of the world’s fastest-growing economies over the past decade will not come to an abrupt end simply because of a bloodless putsch. Foreign companies generally place more importance on stability and security than on democracy, and relocating factories is costly. Foreign companies also value an environment in which they do not face Western sanctions. But the military’s gamble could fall apart if they engage in a strong crackdown on a protest that could get out of hand.

The Powers That Be Are Following the Events Closely

The crisis in Myanmar is even more delicate and dangerous because it could have both internal and external consequences. The country is at the center of the strategic interests of several powers in the region, starting with China, India, and, of course, the United States, which aspire to block Beijing’s international plans. This means that no one has an interest, for the moment, in a worsening of the situation; however, none of these powers will hesitate to act if their interests are endangered or if a rival is preparing to take advantage of events.

For China, Myanmar has become central to its strategic interests. Indeed, China is still too dependent on its exports to European markets and the United States, but also on imports of raw materials needed for its industry. This implies unhindered access to maritime routes, in particular to the Indian Ocean. In this regard, China’s east coast ports force its ships to travel along routes controlled by hostile powers, especially the United States. That is why, in recent years, Beijing has partnered with Myanmar in its “New Silk Road” initiative to create trade corridors connecting Chinese territory directly to the Indian Ocean.

As a result, according to Stratfor,

China has managed to maintain good relations with the NLD [National League for Democracy, Aung San Suu Kyi’s party] and the military, as well as with major ethnic minority parties and ethnic militant groups, allowing it to move forward regardless of what the outcome of the current crisis is. Beijing will intervene quietly when necessary to avoid chaos. But its main concern will be the continuity of its infrastructure projects, commercial interests and border security.

For the United States and the European imperialist powers, Aung San Suu Kyi, now overthrown and imprisoned by the military, has always represented an ally and been a figure presented as a symbol of the “struggle for democracy.” This hypocritical discourse of the Western powers obviously hides their geopolitical objectives in the region. In recent years, however, Suu Kyi has lost much of her international aura, especially after defending the army responsible for carrying out a genocide against the Muslim Rohingya minority. Now, after the coup, imperialist powers may try to use the defense of Suu Kyi and Myanmar’s “democracy” as a way to pressure the military against China. Some analysts, however, believe that Western pressure on the military could have the reverse effect and end up pushing them into the arms of China. Indeed, the U.S. hopes that the crackdown will remain limited, that the military will set a timetable for a quick transition of power to civilians, and that it will release political prisoners so that Washington will not be forced to impose tougher sanctions.

Finally, the other power closely following developments is India. New Delhi, in its ambition to compete with Beijing as the “world’s factory,” is fully aligned behind Washington in its policy of encircling China. In this respect, India can only follow the United States in Myanmar.

One of the “unexpected” actors in this crisis has been Myanmar’s young working class. Hundreds of thousands of workers across the country have taken the lead in fighting the coup and defending democratic freedoms, which are already in short supply in Myanmar. Myanmar’s young working class has developed in the last decade with increased access to the Internet and some freedoms that other working and popular generations have not experienced in the country.

Myanmar is, however, a country that offers some of the most advantageous exploitative conditions for capital, with wages not exceeding $3 a day. But the country’s working class, especially in the textile sector, has changed in recent years, ramping up union organizing and important struggles against employer repression and job cuts. The Covid-19 pandemic, together with the drop in orders for the garment industry, has only worsened the workers’ situation. Thus, an article in the China Labour Bulletin states, “At least 42 garment factories have closed. It appears that many factory owners have used the difficulties in the sector as an excuse to attack labor activists and trade unionists.” This triggered a series of workers’ struggles against layoffs after workers rejected the severance pay offered them.

In other words, it is unsurprising that the working class is on the front lines of current demonstrations if we take into account precisely these processes of union organizing and struggles for improved working conditions, against layoffs, and for workers’ union rights.

Who Is Leading the Movement?

For the moment the movement seems to be entangled with the defense of Aung San Suu Kyi and her party. It is not clear, however, that this political force is in a position to lead and control the working and popular masses. The Asia Times quotes a protester: “Many have taken to the streets of their own free will without any leader, unlike in 1988 and 2007.” And as the Guardian states, “The protesters’ demands now go beyond contesting the coup. They are also calling for the abolition of the 2008 constitution drafted under military supervision, which gave generals a veto in parliament and control over several ministries, and for the establishment of a federal system in an ethnically diverse Myanmar.”

In other words, the enormous social power of the working class has been awakened by the coup; the demonstrators have entered this episode of class struggle more prepared in some ways after the experience of the struggles that workers have been waging in recent months and years; for the moment Suu Kyi remains quite popular, but nothing can guarantee that the working class and youth will limit their demands to those of Suu Kyi and her party, which are deeply linked to the imperialist powers. This prospect scares the ruling classes of the country as a whole more than any coup or government.

The workers and popular classes thus have the strength not only to put a stop to the military but even to raise their own demands, if they succeed in developing the mobilization independently, creating their own organs of self-organization to lead the struggle, and avoid falling into the traps that the reactionary forces will set for them, be they the military, the supporters of Suu Kyi, or the representatives of the imperialist powers.

First published in French on February 10 in Révolution Permanente.