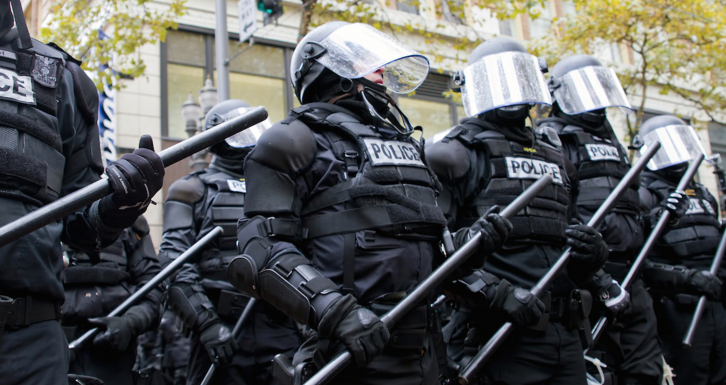 Two of these incidents occurred in Milwaukee and Chicago. In Milwaukee, police shot and killed Sylville Smith as he was fleeing from them, on August 13. As the news of the murder became known, angry crowds confronted the police and began to fight back, throwing rocks at the cops, setting police cars on fire, and burning down some businesses in a spontaneous mass uprising.

After the violence subsided, the next day the leader of a Black church led a peaceful march of some 100 people to the police station. The crowd raised their arms in the air, in the “Hands Up Don’t Shoot!” gesture that has been a feature of many protests.

Some cops at the station, including on the roof, responded by placing their hands on their guns as the crowd approached. Others “jumped out of their cars with rifles and billy clubs,” said the church Deacon who led the march. “We just wanted to get our point across. We just want peace. Why do they always have to react by going to the gun first?”

The police countered in a press conference that Smith had a criminal record in justification of the shooting. They also claimed to have a video of Smith threatening them with a gun, but refuse to release it to the public.

In July Chicago cops killed an unarmed Black teenager, Paul O’Neal. In this case the police did release a partial video taken by police body cameras. The actual murder was not filmed, the cops claim, because the officer who did the shooting somehow didn’t have his camera turned on.

The video released showed O’Neal lying face down in a growing pool of blood surrounded by other officers, who then handcuff him and search his belongings as he continues bleeding. He died later in hospital. He was shot in the back, according to the medical examiner.

At the scene, officers can be overheard concocting stories about how they were attacked. One of the officers is heard while walking away from O’Neal, cursing and complaining that “I’m going to be on a desk for 30 goddamn days now. Mother f….!”

His expectation that he will get only a slap on the wrist for murder is typical throughout the U.S. as almost all police involved in such shootings, including those that have been caught on video and are well known, are barely punished if at all.

In the United States, police are not subject to the same laws as civilians when it comes to use of force including deadly force. Police departments establish their own rules in such cases, and this can vary from city to city. One thing these policies have in common is that police may shoot to kill if they “believe” they are being threatened.

The Supreme Court has upheld this standard.

This defense has been used successfully in many cases where the cop says he “thought” that a suspect was reaching for a gun when it turns out there was no gun, but he or she was reaching for identification as requested by the police.

Since any cop can claim he or she felt threatened, and it is impossible to know what they believed, it is extremely difficult to prove otherwise. In the case of African American victims, Black witnesses are dismissed as “biased.”

This policy is only one aspect of the whole legal system’s excusing police murder. The case of Freddie Gray is indicative. Baltimore police attacked him because they claimed he looked at them the wrong way. He was beaten, arrested, and put in a van for transport to the police station. Upon his arrival he was found dead.

An uprising similar to Ferguson and Milwaukee erupted in the city. Frightened by the violence, authorities brought charges against the group of officers. A jury trial for one of the police perpetrators resulted in a hung jury. Then two of the remaining perps opted for trials by judges, who found them not guilty, and then charges against the rest were dropped since it was clear there would be no convictions.

The result: The police themselves admit that Gray died at the hands of the cops in the police van. But none are found responsible. A peculiar but typical form of “justice.”

As a result of the Gray case, the federal Department of Justice investigated the Baltimore Police Department. Its report, recently released, was in the words of the New York Times a “scathing” indictment of the systematic police repression of Blacks. The report demolishes the myth that police oppression of African Americans reflects only the actions of a few “bad apples,” not most police.

On the contrary, the DOJ report found the whole Police Department engaged in the systematic repression – it is policy. Is it just one police department that is to blame? Not according to the report, which says that cities and towns across the country experience the same systematic repression. After all, Black Lives Matter protests have occurred in many cities, from New York to the small St. Louis suburb of Ferguson.

Another myth is that the situation can be resolved by having more Black police officers. It is true that having all white or mostly white departments exacerbates racist treatment. But the Baltimore police are majority Black. All police are trained and disciplined by the police culture to carry out this policy. Any who object, white or Black, are ostracized, and if they persist are ejected.

The report blames the pervasive use by police of “zero tolerance” policing. This is the policy of going after small “crimes” like spitting on the sidewalk, public drinking, begging, etc. etc. ostensibly to prevent bigger crimes. There is no evidence whatsoever this is true, so this explanation is another myth to cover up pervasive police harassment and violence.

“Zero tolerance” originated in New York and has spread, the report says. The report avoids the question of why this policy was adopted, and applied to Blacks (and other minorities) almost exclusively. For example, in New York from 2008 to 2010, eight citations for riding bicycles on the sidewalk were issued in Park Slope, a predominately white neighborhood, while in nearby Bedford-Stuyvesant, predominately Black and Latino, 2,050 were issued.

The report looks only at this aspect, but not at the underlying reality that predates “zero tolerance” – the systematic oppression of Blacks that has been part and parcel of the development of United States capitalism from colonial times up to the present world power.

The New York Times also wrote, “But this week’s blistering report from the Justice Department on police bias in Baltimore also exposed a different, but relate, concern: how the police in that majority Black city treat women, especially victims of sexual assault.” The report “painted a picture of a police culture deeply dismissive of sexual assault victims” especially poor Black women. The report documents police and prosecutors blaming the victims in gross terms, in one case dismissing a rape victim as a “conniving little whore.”

This too is not only a Baltimore problem, but is typical throughout the country, as is indicated by one fact: tens of thousands of rape kits sit in police custody and are never tested, and are then thrown out.

It also should be noted that while the Department of Justice report is important for what it exposes, the DOJ does nothing to bring the police perpetrators to justice.