After working mandatory overtime during the pandemic, including 16-hour shifts and seven-day weeks, Nabisco workers in five states are striking in protest of their bosses’ attempts to cut their pay and healthcare, and divide their union. 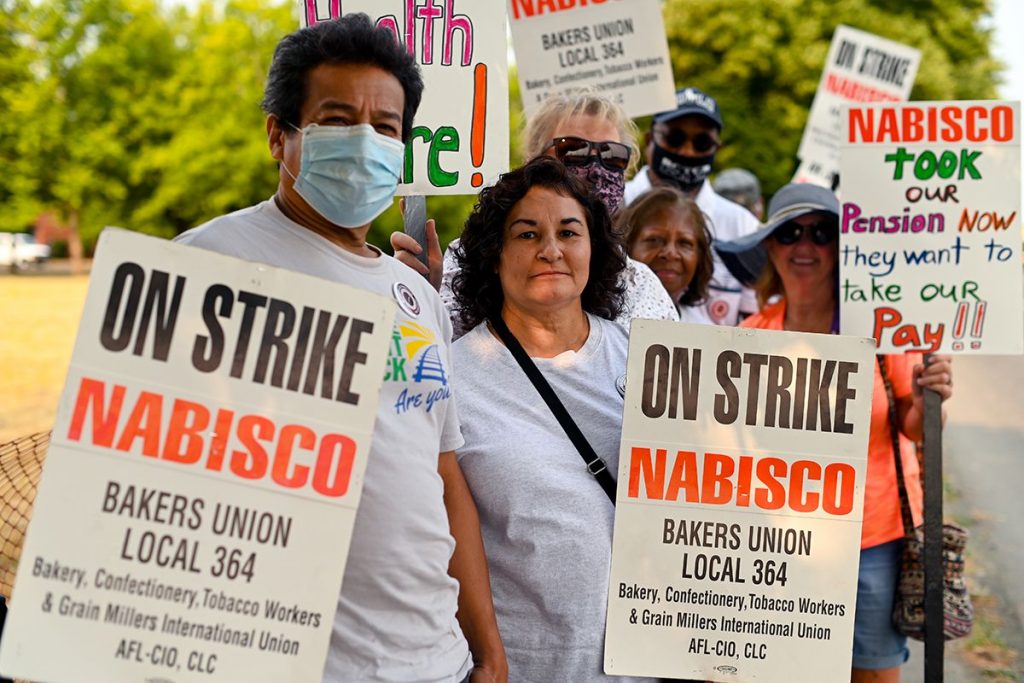 Nabisco factory workers across the country are on strike, as parent company Mondelez International tries to cut workers’ pay and benefits while extending work hours. The strike began in Portland, Oregon, then spread to three other cities in the past week, and is now ongoing in five states. The company’s attempts to worsen the conditions of Nabisco workers is outrageous, especially given that the company’s revenue skyrocketed during the pandemic, with profits from the past quarter nearly doubling those of the same time last year. The workers’ union contracts were up this summer, and workers in Portland, as well as in  Aurora, Colorado, Richmond, Virginia, Norcross, Georgia, and Chicago, Illinois are protesting the company’s attempts to cut their pay and healthcare even though their labor during the pandemic has brought their bosses millions.

The cuts Nabisco is asking its workers to swallow include “an alternative workweek,” which would treat weekend days and double shifts as regular hours (without overtime pay), with the overtime rate of 1.5 times the standard rate only being paid out after 40 hours of work. This could result in a worker working multiple 16-hour shifts, including on the weekends, before seeing a single cent of overtime. For some workers, according to HuffPost, this could result in an effective pay cut of up to $10,000 per year. In an additional attempt to achieve a bosses’ dream of cutting labor costs while also weakening worker power, Nabisco is pushing for a two-tiered health care plan which would leave newer workers paying more, dividing the union. The company also wants to stop providing supplemental health care for retirees, end bonuses for perfect attendance, and increase the use of non-union temps. The company ended workers’ pension plans in 2018.

Nathan Williams, an oiler who works at the Nabisco plant in Richmond, Virginia, told Motherboard that during the pandemic, some workers worked 16 hours a day, seven days a week, for up to three months. “For them, it’s all about finding the cheapest way to make cookies,” he said, noting that the company has been following a recent trend of corporations pushing their workers to take on extra hours instead of hiring new people. In the Chicago plant, workers are regularly assigned a second, mandatory, eight-hour shift after they’ve arrived at the factory for their first.

The Nabisco workers are affiliated with the Bakery, Confectionery, Tobacco Workers and Grain Millers International Union (BCTGM), the same union as the Frito-Lay workers from Topeka Kansas who were on strike earlier this summer over similarly egregious working hours. Like Nabisco, Frito-Lay’s parent company reported a massive jump in revenue during the pandemic, all while forcing some of their workers to work 80-hour weeks, which saves the company money on hiring and training costs at the expense of the well-being of the more tenured workers. The Frito-Lay workers ended their strike after voting to ratify a contract that did little to alleviate their terrible working conditions and achieved only a few of their demands, including a guaranteed one day off per week, the end of back-to-back shifts, and a four-percent raise, far lower than workers had demanded.

It is reasonable to ask: how did it get this bad? How have these unionized workers been working the same shifts our forebears rebelled against 100 years ago? Their coast-to-coast strike is, hopefully, the start of a fight to improve conditions across the country.

And these workers are fighting. April Flowers-Lewis, a utility operator at the Chicago plant, told Jacobin that she and her coworkers had shut down the plant. “We have all different departments: mixers, the bake floor, packing, and sanitation. Almost everybody is out — we have had around four people try to cross the picket line,” she said, “but out of three hundred–something people, that’s pretty good.” The workers at Nabisco’s Portland plant also succeeded in shutting down their production lines for a week before management bussed in scabs. Northwest Labor Press reported that “members of other unions at the Nabisco plant have been honoring the strike picket line, including Operating Engineers Local 701, Teamsters Local 206, and IBEW Local 48. Members of Machinists Lodge 63 who maintain the equipment also left, taking their tools with them when they left the plant.”

Nabisco’s refusal to spend any of their huge pandemic profits on improving their workers’ conditions is an international issue. In 2015, Nabisco told workers at the Chicago plant to accept a 60-percent pay cut or lose their jobs. The workers refused, and Nabisco closed multiple Oreo manufacturing lines and moved the production of those products to a plant in Salinas, Mexico. Nearly 600 workers lost their jobs, and workers in the Mexico plant are now making a maximum of about $14.90 per day.