National Strike After Death of Two Teachers in Argentina

Ten weeks ago, teachers in Chubut, in southern Argentina, began a strike because the government is refusing to pay them their salaries. On Tuesday, two workers who were returning from a protest were killed in a car accident. As a result of massive outrage, there is a national teachers strike today. 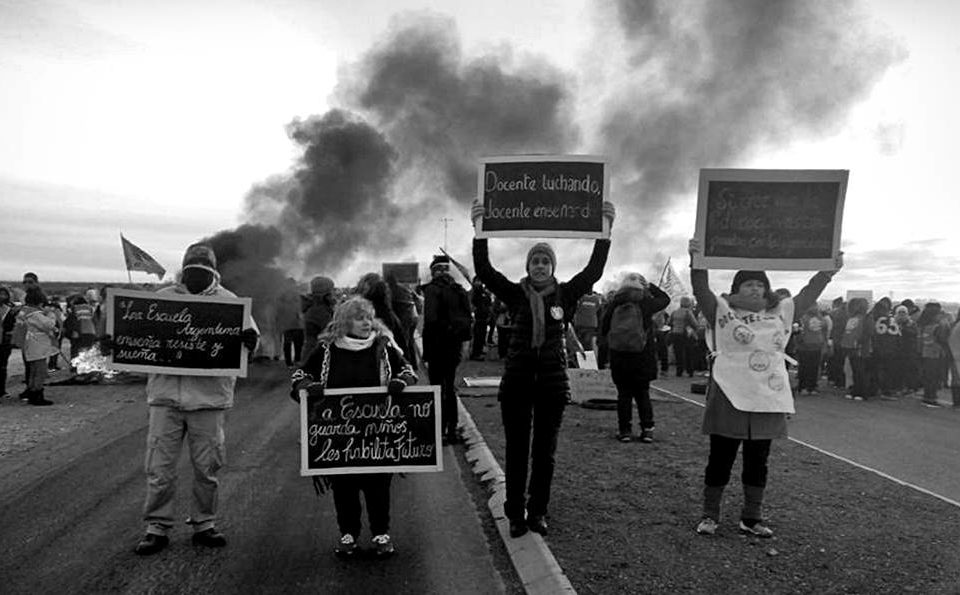 Teachers in Chubut have been on strike for 10 weeks. But on Tuesday, their struggle suffered a major blow. Two teachers, Jorgelina Ruiz Díaz and Cristina Aguilar, died on their way home from a protest. Shock waves reverberated around the nation, with a working class that is tired of paying for the economic crisis. Today, all the teachers in the country are on strike, holding the government responsible for the teachers’ deaths.

For the past 10 weeks, teachers in the southern Argentine province of Chubut have been on strike. They aren’t demanding a pay raise but are merely asking to get paid. As a result of Chubut’s fiscal deficit, the government said it does not have the money to pay the teachers. The provincial coffers have no cash but only debt bonds. For this reason, teachers are only receiving parts of their salaries every month.

This comes in the context of a massive economic crisis in Argentina and a huge devaluation of the Argentine peso after the primary elections last month. The whole working class is being squeezed, and salaries that used to get people through the month no longer do. And now teachers in Chubut aren’t even getting paid these meager salaries.

Over the past 10 weeks, teachers in Chubut have held numerous demonstrations—along with students and the people of Chubut—at picket lines and school takeovers. Public education in general is currently severely underfunded due to budget cuts made to meet IMF payments. Despite the duration of the Chubut teachers’ strike, the national government of Mauricio Macri has not responded at all to the teachers’ demands. Neither did the winner of the primary elections, the Peronist Alberto Fernández, address the issue. This is because Mariano Arcioni, the governor of Chubut, is Fernández’s political ally. In fact, he is part of the Frente de Todos coalition, which is headed by Alberto Fernández and the ex-president Cristina Fernández.

On Tuesday, two teachers—Jorgelina Ruiz Díaz and Cristina Aguilar—were returning home after a protest. They got into a horrible car accident and died.

Their deaths reverberated around Argentina. Immediately, teachers and community members took to the streets, setting fires in front of the legislative building. A video which has been circulating in Argentina shows flames in front of the legislature and the trembling voice of a teacher, holding back tears as she said, “The government officials are giving themselves raises. And we haven’t even gotten paid. We are putting our lives on the line to fight this fight.”

The Infantry arrived soon after to repress the struggle.

The daughter of Jorgelina Ruiz Díaz posted the following on Facebook:

My mother is gone. I’m not going to see my mom anymore. I repeat it again and again to try to accept it. She is gone forever. She went down fighting, with the energy that always characterized her. Where did you get it, Mom?

Since 2005 [she has been] in the fight, demanding what she deserved. She wanted to be a teacher, but her job did not pay the bills. She wanted to be in the classroom and live with dignity, something so basic! What are these times, when you have to defend the obvious?

My mother will never return to the classroom again. Even that was taken away from her. And they took our mother away from us.

Your struggle goes on forever. I love you with all that I am.

These words stand in stark contrast to the government’s cynicism: on the same day that the accident took the lives of Jorgelina and Cristina, Chubut’s 2020 budget project was unveiled, proposing a 100 percent salary increase for the governor and high-level functionaries.

The national government did not bother to backtrack after these deaths. Macri affirmed that the budget for the provinces had already been allotted and there would be no new disbursements.

The Argentine Education Workers’ Union, the national teacher’s union of Argentina, organized a national strike today, due to the anger and resulting crisis triggered by the deaths of the two workers. As a result, teachers around the country are not in the classroom today as a protest to these needless deaths: deaths for which the government is responsible.

However, the union, led by Kirchnerism, has not responded to the seriousness of this conflict. They called the strike but urged people to stay home; they did not call for a national protest.  This is in line with Alberto Fernandez’s speech that asked the workers “not to be in the streets”—an attempt to guarantee an orderly electoral transition in October.

While Macri will probably be defeated in the elections and will leave the government, there remains the disastrous consequences of the debt held by the IMF and impending increases in austerity. Chubut’s government is not led by the right wing but rather by Fernandez’s ally. This just goes to show what a Fernandez government will mean for the working class: austerity and struggle.

On the other hand, the Workers’ Left Front, which is part of the opposition to the union bureaucracy, proposed a two-day national strike with mobilizations in the street and a break with the IMF, so that the foreign debt is not paid and the money is redirected to education, wages, and the basic needs of the working people.

Today’s national strike is a statement: one that says that government is responsible for the deaths of Jorgelina Ruiz Díaz and Cristina Aguilar. And it is a statement that the workers of Argentina won’t willingly pay for the crisis generated by the IMF, its national partners, and the policies of imperialism.