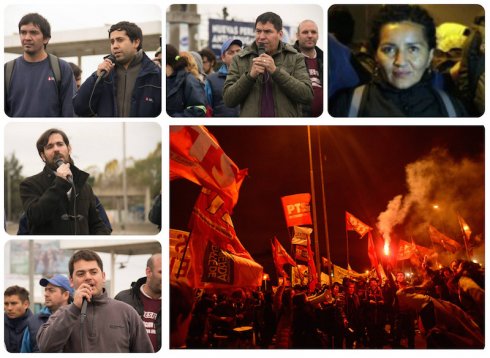 Rubén Matu (Lear), member of the comision interna (shop floor commission): “We have been meeting up with comrades from different companies and groups, and coordinating our actions. We have our own demands -> http://www.laizquierdadiario.com/ARGENTINA-Why-we-strike]…”
“The Kirchnerist administration says this is a “National and popular” government, but workers had already organized five national strikes against its policies. After 10 years of economic growth, five national strikes held by the working class mean there is still a lot to achieve…”

Catalina Balaguer (Pepsico) is a rank and file delegate from PepsiCo Snacks. Catalina highlighted the workers participation in the massive demonstration #NiUnaMenos against femicides and gender violence, and reminded us that the rights of women workers were an important part of their demands today: “It was a great demonstration, we took part in it together with a large delegation from the factory, along with our families and friends; it was very important for us…”

Javier “Poke” Hermosilla is one of the leaders from Kraft Foods’ comision interna (shop floor commission): “We marched and we took part in this road block as members of the food processing union. We are fighting for the demands of thousands of workers. We want to end precarious jobs and layoffs.”

Nicolás del Caño is a national deputy from PTS and Left and Workers’ Front (FIT) in Argentina. “We stand next to Worldcolor workers who are fighting for their jobs, as we did with Lear workers that carried out an enormous fight back during 2014 against the bosses, the union bureaucracy and the police… Here, at this roadblock, you will find fighting trade unionists, rank and file delegates and the left. We hope other organizations will join us.”

Jorge Medina (MadyGraf worker-run factory, formerly known as Donnelley)
“…We’ve ensured the success of the strike once more; and we could tell the media the workers’ demands… We had the chance to tell the people what we are fighting for: Donnelley’s expropriation for MadyGraf cooperative, in order to keep jobs for hundreds of families. Also, Worldcolor workers fight against 280 layoffs and against the company’s closure; or the teachers demanding their unpaid wages. Metalsa workers, against layoffs and Lear workers that are still fighting for their reinstatement. Airport workers joined the action too…”
“With other rallies across the country, we are proving that the working class is prepared to fight back against layoffs, dismissals and factory closures, together with our comrades from PTS and the Left and the Workers’ Front, with workers from different factories… We know we cannot stay in our workplaces, we also need to go one step further and change this society.”