Writing in Jacobin, Peter Gowan argues that the government should buy a “controlling stake” in the fossil fuel companies. Does this offer a true solution for the economic and ecological crises? 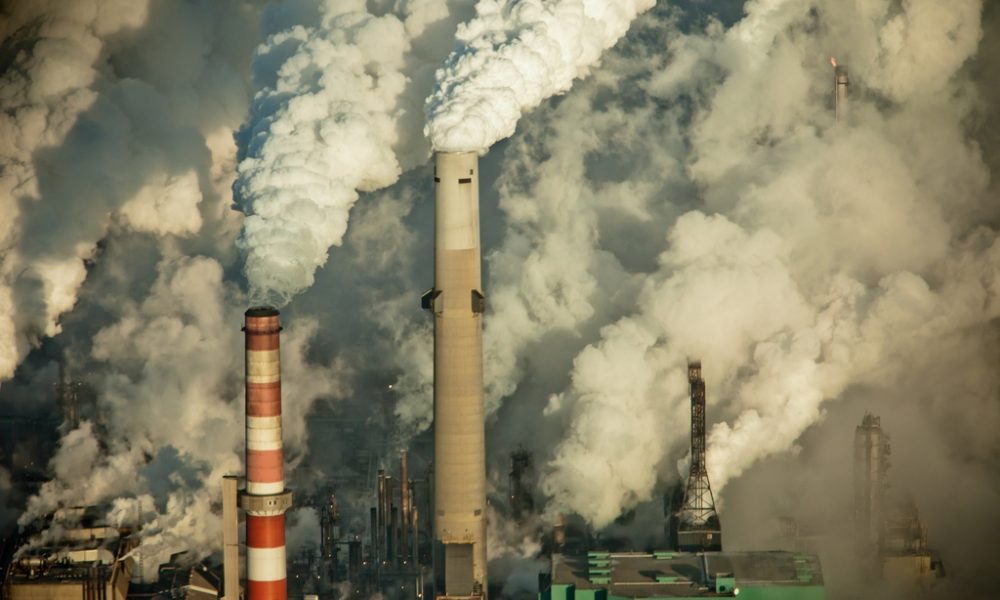 In the U.S., more natural gas was extracted in 2017 than in any year prior. Crude oil was produced at levels 60 percent higher last year than in the year 2000 and on par with the record years of the early 1970s. With all the advances that have been made in renewable energy technology in recent decades, fossil fuels are still responsible for 81 percent of all energy on the grid in the U.S., while non-nuclear renewable resources such as wind, water and solar account for just 10 percent. China’s emissions of greenhouse gases also rose to a new record last year after falling slightly in 2015 and 2016.

Given the complete lack of the will of governments to take action to cut fossil fuel production meaningfully and the obvious impossibility of corporations to self-regulate, what program can we put forward to avert climate catastrophe?

Writing in Jacobin, Peter Gowan notes that market solutions are “incapable of spurring the economic transition needed” and argues that the only way to quickly move from oil, gas and coal to renewable energy sources is to nationalize the fossil fuel companies.

But what kind of nationalization exactly does Gowan suggest?

This year marks the 80th anniversary of Mexico’s historic nationalization of the oil sector. The measure did not occur out of nowhere, however. It was preceded by years of fierce class struggle in the oil industry. In 1936, oil workers put forward a series of demands which included union control over hiring and firing, improved salaries, improved medical care, the creation of a pension plan, and 18 mandatory days off per year, among others. The oil companies refused, and the workers struck the following year. They shut down all transportation — and virtually all activity — in Mexico City for two weeks.

Caught between a combative workers movement and the intransigence of the employers, the Mexican government’s hand was forced. The populist administration of Lázaro Cárdenas nationalized the industry in 1938 and even handed over partial management of the companies to the unions. Cárdenas had little choice in the matter. In fact, in the days before he announced the measure, the workers had begun seizing the oil installations themselves. The Russian revolutionary Leon Trotsky, who was living in exile in Mexico during these years, defended the “courageous and progressive measure” taken to expropriate the British imperialist corporations who controlled a large portion of Mexico’s oil reserves. “The expropriation of oil is neither socialism nor communism. But it is a highly progressive measure of national self-defense,” Trotsky declared.

The oil industry remained primary state owned until 2014, when the neoliberal government of Enrique Peña Nieto succeeded in opening up the industry to foreign and private exploitation. But despite this reversal and the many limitations of the Cárdenas government, this progressive measure taken by Mexico, under strong pressure from the oil workers, points to the possibilities offered by nationalization, especially in advanced countries like the U.S. and the U.K.

The Wrong Kind of Nationalization

Unfortunately, this is not at all what Gowan means by nationalization. Rather, he suggests that the U.S. can “buy a controlling stake in all major fossil fuel firms.” He admits that this would be a costly measure; he cites the Democracy Collaborative estimate that says around $1.15 trillion dollars would be needed. Gowan claims that the costs can be reduced by announcing, at the offset, the government’s intention to keep “huge quantities of oil and gas … in the ground,” thereby driving down the price of shares for these corporations.

But why should we advocate buying out the fossil fuel companies — the very companies that bear the greatest responsibility for the severe storms and rising sea levels, for increased droughts and flooding around the world, and for deadly pollution that poisons our air and who have never had to pay even a tiny fraction of the costs associated with this destruction? One study put the cost of the environmental destruction caused by the oil, coal and gas industries at a staggering $700 billion annually, an amount which is likely to rise as the effects of climate change become increasingly severe.

Furthermore, indemnification of the nationalized corporations can only be done through public funding. In other words, the taxes extracted from the working class and poor would not be put toward the provision of health care or education, the development of public transportation, or affordable housing. Instead these public funds would go directly to the pockets of the billionaires — the same billionaires who profited off the exploitation of the working class for decades — in order that they should avoid any severe “hardship” as a result of the nationalization.

Does a “Legal” Resolution Exist?

Gowan argues that fair market compensation provides the only legal basis for nationalization. We don’t disagree. However, the radical measures needed to overcome the climate emergency cannot be based in existing legal framework, since this framework was created precisely in the interests of big business and against the interests of the majority.

The American court system, throughout the past two centuries, has repeatedly ruled in favor of big business and the rich and against the interests of the majority. In this decade alone, the U.S. Supreme Court issued its infamous Citizens United and Hobby Lobby decisions, along with dozens of other lesser-known decisions favoring monopolies like Comcast and WalMart. When the courts have, on occasion, ruled against the corporations, such as the the judgement against BP for the most destructive oil spill in history, the penalties have been minimal. The $20 billion penalty imposed on BP — the largest environmental penalty in U.S. history — was less than the annual profit reported by the company in the year of the spill.

Indeed, the legal system has not even sufficiently guaranteed democratic rights for people of color, women, LGBT people, and other oppressed groups. For example, in the vast majority of cases, the courts have failed to convict or often even indict police officers who murder Black people and people of color. If the legal system is designed to protect the rich, why then should we expect to achieve a democratic solution to the ecological crisis through the existing legal framework?

Gowan’s proposal is perfectly in line with the European social democratic model. Indeed, he references both Corbyn’s recently-announced plan to nationalize the energy sector and Norway’s successful “nationalization” of the oil industry.

However, he fails to mention that Statoil, the largest oil company in Norway, is a public-private partnership, in which the government owns two-thirds, and the remaining third is in private hands. Since the profits of its shareholders depend precisely on increasing extraction, Statoil has certainly made no serious plans to cut back its oil production. In fact, in the current year, Statoil’s production is expected to be 1 to 2 percent above 2017 levels. For his work in guaranteeing high returns to Statoil shareholders, the CEO of the company, Eldar Sætre, earns a respectable $1 million annual salary.

Now, let’s consider Corbyn’s plan. The Labor Party leader proposed purchasing the assets of the energy utilities in Britain for an estimated £176 billion ($238 billion), more than the entire amount spent on the National Health Service. Once again, an exorbitant sum in public funds would be used to satisfy the British capitalist class, not put toward meeting the basic needs of working-class and poor Brits. Moreover, while proposing the “nationalization” of the energy grid, Corbyn has not put forward any plan to nationalize the coal industry, which produces one of the most destructive fuels on the planet. Despite a drop off in recent years, the U.K. still extracts over 4 million tons of coal annually.

Rather than buyouts — purchasing a controlling stake in the fossil fuel companies and creating public-private partnerships — what socialists should demand is the immediate nationalization, without compensation, of the entire energy sector, including the public utilities and the fossil fuel companies. Further, these companies must be placed under the democratic control of their workers and consumers in order to achieve an immediate transition to a renewable energy system.

Federal and state government bureaucrats have no interest in ushering such a transition and therefore cannot be trusted to manage the industry. The fact that some of the world’s biggest polluters are state enterprises — such as PDVSA in Venezuela or public-private partnerships such as Saudi Arabia’s Aramco or Russia’s Gazprom — shows clearly that state management does not necessarily lead to an ecologically-sustainable energy industry. Only workers and working-class consumers have an interest in moving toward new renewable energy projects, and only they are capable of putting the revenue from fossil fuels toward the needs of the majority of the population.

As Oklahoma teachers highlighted through their strike last month, the oil and gas-rich states, where large fossil fuel companies rake in millions each year, are the same states in which teachers’ wages are the lowest and the public education systems are most underfunded. This is because generous tax breaks and loopholes for the oil and gas companies have allowed the industry to boom while corporate tax revenues in these states have fallen and public coffers have been drained. Nationalization under worker and consumer management would put an end to this perverse scenario. The oil and gas industry, once nationalized, could provide electricity as a free, basic right to working class and poor people. At the same time, by raising the rates on big business, and ending all tax subsidies to the fossil fuel companies, the industry could generate the necessary resources to increase the standard of living for workers, fully fund education and health care, greatly expand housing for the poor, and develop an alternative energy plan that stops destroying our planet.

These connections are not just being made in the U.S. This past month, the socialist Argentine legislator Nicolas del Caño of the PTS (Socialist Workers’ Party) put forward a bill in Congress for the nationalization of the fossil fuel industry and the energy utilities under worker and consumer control. The proposal is a response to the wave of major utility hikes under President Mauricio Macri — hikes which have been felt disproportionately by the working class and the poor. In his speech, del Caño declared, “The multinationals rob us of our resources and have wrecked our public education system. Our teachers earn miserable salaries and we have schools that are crumbling.” The nationalization of the energy industry would “allow for a rational management plan in which all people have access to essential services — a system which is efficient and not run for profit.”

The only ones who guarantee the fastest possible transition away from fossil fuels are those who are most affected by pollution, climate change, and the ecological crisis: that is, the working class. It is the workers therefore who should be in charge of the administration of the fossil fuel companies. A slogan for nationalization under worker and consumer control would constitute not a demand for democratic reform but a transitional demand — a demand that allows the working class to see clearly that socialism is the only way out of both the ecological emergency and the economic crisis we face.