Social distancing — popularized under the slogan Cancel Everything — is essential to slowing the spread of the coronavirus. But to solve the problem, we need to take private healthcare under public control, immediately. We must Nationalize Everything. 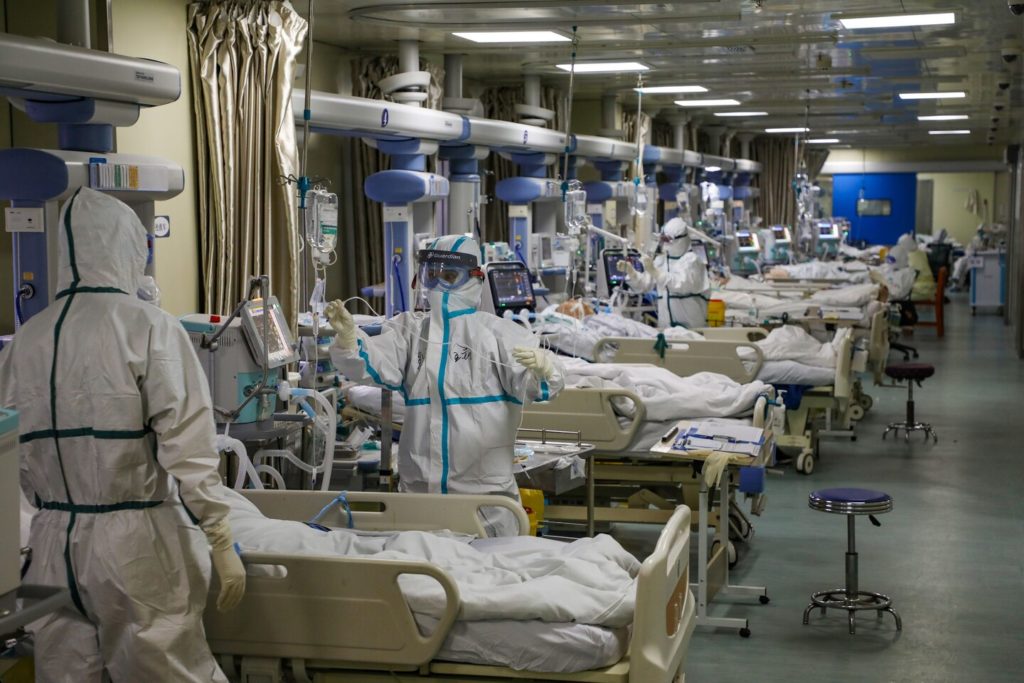 As I write these lines, I have mostly stayed inside for a week. The coronavirus is beginning to overwhelm the healthcare systems in ever more countries — as of this moment there are over 200,000 cases and 8,000 deaths worldwide. The kind of social distancing I’ve been practicing is essential if we are to slow the spread of the virus.

In one widely read article in The Atlantic eight days ago, Yascha Mounk made “the case to “Cancel Everything,” writing that “only one measure has been effective against the coronavirus: extreme social distancing.” Governments around the world have been following this advice: Large public gatherings are being prohibited, while bars, restaurants, schools, universities, and museums have shut down.

Social distancing, however will only “flatten the curve.” In other words, it will slow the rate at which people get infected. There’s value in that, because it will give hospitals, with their limited capacities, more time to deal with the serious cases. But social distancing will not change the number of people that will ultimately get infected.

Regardless of how the pandemic develops, the capacities of hospitals need to be massively increased; for instance, there are far too few beds in intensive care units to cover the coming demand. Hospitals around the world are permanently understaffed due to decades of neoliberal reforms. At the same time, there are shortages of surgical masks, disinfectant, protective clothing, ventilators, and other equipment needed to treat COVID-19. This is not just a problem of speculators buying up existing supplies — there is a lack of everything.

Different European governments are taking radical measures that go beyond appeals or prohibitions to get people to stay at home. The government of Pedro Sánchez in the Spanish State, for example, has declared that any business capable of producing supplies to fight the corona virus must report to the provincial government.

There are not many factories in the world that produce surgical masks or ventilators. But countless factories could be repurposed immediately. For this to happen, however, industrial capacities need to be centralized by the state to fight the coronavirus. Car factories, which are largely idle at the moment, could be used to manufacture ventilators for the public good — paid for by the car manufacturers themselves.

This has happened before in U.S. history. During World War II, the entire economy was put under the control of the War Production Board (WPB). All factories were repurposed for the production of arms and munitions. On February 22, 1942, for example, all automobile production in the entire country was ceased, with those factories shifting to help the country go from producing 100 airplanes a year at the beginning of the war to 50,000 by the end. Why shouldn’t we mobilize in the same way to fight against a deadly virus?

It is not enough for people to say home. Flattening the curve is not a panacea, as Joshua Gans articulates in an important article; we need to be on a “war footing.” There are enormous amounts of work to do: building emergency treatment centers, distributing food, measuring temperatures, tracking the infection, disinfecting medical facilities, to name just a few. Hundreds of thousands and millions of people could be mobilized, provided with proper training and protective gear, to fight the epidemic.

Rather than asking if this kind of emergency mobilization is possible, we should ask ourselves the opposite: Is it possible to do without live-saving equipment just because we need to respect the property rights of a handful of factory owners?

The need is even more pressing when it comes to vaccines. Governments around the world are currently financing research into a vaccine against the coronavirus. But as with all vaccines, manufacturing and distribution will be put in the hands of big pharma, and as Gerald Posner writes in The New York Times, private pharmaceutical companies represent an “obstacle to vaccine development.” That’s because they will insist on hefty profits.

We need to take profit-making out of the equation. Public money funded the development of a medication that can prevent the spread of HIV (PrEP, known under the brand name Truvada). Today, the patent for this nonetheless belongs to a private company, Gilead Sciences, which charges thousands of dollars a month for a pill that only costs a few cents to produce. In other words, we could be stopping the AIDS epidemic, but private ownership prevents that. We cannot allow a coronavirus vaccine to become another outrageous example of profits before human needs.

We are already witnessing capitalist governments competing to try to get a monopoly on a possible coronavirus vaccine. It is easy to picture a nightmare scenario in which a vaccine becomes available, but costs thousands of dollars for each person who needs it.

The solution is not, as the Times proposes, to develop “public-private partnerships” for more affordable vaccines. The solution is to put all the big drug companies under the democratic control of their workers, scientists, and representatives of workers’ organizations. This is how we make sure drugs and vaccines are manufactured for the public good.

In other words, the time is ripe for a large-scale program of nationalizations. In contrast to what happened in the United States during World War II, this is not about installing a production board made up of corporate executives, nor of taking control of companies for a short time and then returning them to their owners when the crisis has passed.

Instead, we need democratic control by healthcare workers, factory workers, cleaning workers, and everyone else who has a role to play in this crisis. They are, after all, the people who best understand their jobs. The capitalist owners of car companies have no interest in manufacturing ventilators for free. But the workers of car companies have every interest in democratically controlled production to save lives.