As the historic Amazon union vote continues in Alabama, workers and socialists across the country are showing their support. 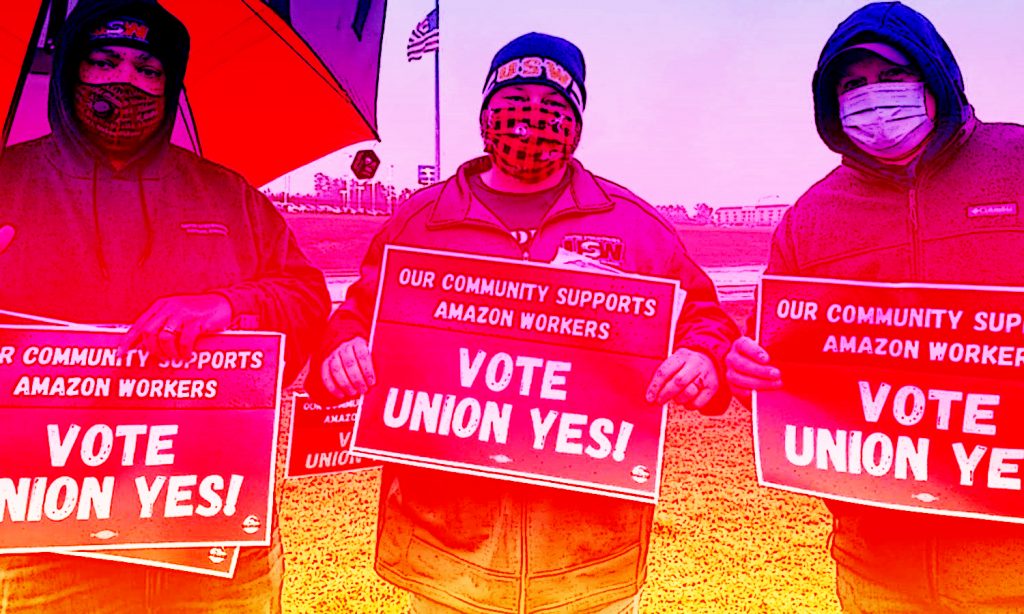 This article was originally published on February 21 on Socialist Resurgence.

About 50 solidarity actions in 25 states mobilized hundreds in solidarity with the Amazon workers in the middle of an intense union drive in Bessemer, Ala. Initiated by the Southern Workers Assembly, actions spread from the South to the North as labor activists realized the historic moment and potential to win a union vote at Amazon.

Socialist Resurgence members joined an action organized by the Connecticut Workers Crisis Response (CWCR) outside an Amazon warehouse in North Haven, Conn.. A spirited group of 30 union members, students, and activists stood out in the frigid temperatures. Their message was heard by Amazon truck drivers who blasted their horns in support as they turned into the warehouse facility. Lupe, a 21-year veteran banquet server, shop steward, and executive board member of UNITE HERE Local 217, said she attended the rally because she knew first hand what anti-union campaigns looked like. Lupe played a leading role in organizing her own Hilton hotel in 2017 and the Sheraton hotel in Stamford, Conn., in 2018 against union busters Cruz and Associates.

In Philadelphia, Socialist Resurgence members reported that close to 100 people were picketing outside the union-busting law firm of Morgan and Lewis, which was hired by Amazon to run their anti-union campaign. Morgan Lewis, with more than 2200 attorneys globally, is considered one of the leading union-busting law firms in the U.S. From helping President Reagan bust the Air Traffic Controllers strike in 1981 to representing Major League Baseball during the baseball players’ strikes in the 1990s, it has a long history of fighting workers.

In Rhode Island, Greenleaf Compassion Care Center cannabis workers who recently went public with their intention to join UFCW Local 328 gathered to send a message of solidarity to the workers in Bessemer.

In Oakland, Trent Willis, president of ILWU local 10, led union chants of a crowd of over 100 activists. John Hopkins, a former Amazon worker at the San Leandro facility, shared his experiences with union busting and said, “There was a purge of people that the (Amazon) see as potential leaders, pro-union people.”

Steve Leigh, a member of the Revolutionary Socialist Network, reports from Seattle that 150 people rallied in Renton, Wash., in a solidarity action organized by DSA, 350.org, Transit Riders Union, King County Labor Council, and other groups. “The focus of the rally was two-fold,” he writes, “Support Amazon worker organizing and win rights for tenants. The rally started at the Multi-Family Housing Association headquarters and marched to an Amazon Flex Warehouse. The housing association was picked as the target because it is a front for large landlords and actively opposes tenants’ rights in the legislature. The organizers stressed the connection of the two issues. Amazon has actively opposed a tax on big business to provide affordable public housing. ‘Amazon has turned Greater Seattle … unaffordable to ordinary people. While Amazon’s workers struggle to make rent, Bezos has earned enough money through the pandemic to give each of his workers $150,000 bonuses and still be as rich as he was before Covid,’ said the Facebook page before the rally.

“At the rally, speakers explained the horrible situation for renters and workers. One woman was laid off because of Covid and she had to drop health insurance to pay her rent. An Amazon worker explained that Amazon moved her co-workers to the night shift with no explanation, effectively firing single mothers. Besides support for Amazon workers in Bessemer, the rally called for rent control, an increase in affordable housing, and just cause eviction. After the rally, the demonstrators marched several blocks to the Amazon warehouse, chanting along the way, and rallied again. As they left they warned Amazon, ‘We’ll be back!’”

Perhaps some of the most important actions happened across the South, where “Right to Work” laws dominate the discussion and union organizing is becoming a priority as car manufacturing, logistics, and other industries are beginning to pop up in more locations. Actions in North Carolina, Georgia, Tennessee, and New Orleans, while modestly sized and relatively left-wing in character, are important reminders of the radical tradition that once challenged the conservative and racist legacy of slavery and the Jim Crow era.

The long tradition of union organizing in Bessemer and the surrounding area could experience a revival thanks to the leadership of the mostly Black workforce at Amazon. These workers are confronting a true monster, with far reaching tentacles and very deep pockets. The median income is $31,610, while Amazon earned $125,560,000,000 in just the last quarter.

The company, instead of using that money to address the needs of workers, is spending millions on an anti-union campaign. The campaign includes text messages, banners with anti-union messages strewn around the warehouse, and consultants who pull workers into captive audience meetings daily to harass and emotionally distress them.

Amazon, while running an brutal anti-union campaign, is also playing the long game and hedging their bets that if the union vote does win they’ll face a weakened bargaining unit. The company is placing their strategy on Alabama’s “Right to Work” laws by weaving a contradictory narrative about the union forcing workers to pay dues through a “dues check-off” even though the laws allow workers to abstain from any financial contributions. Amazon hopes that if the union vote is successful they will find a divided workforce from which they can drive a wedge into the bargaining unit and eventually smash the union.

Solidarity on a massive scale is needed to overcome the many obstacles Amazon will put in the way. The absence of the AFL-CIO in mobilizing workers around the country to publicly support the union drive is noticeable. In a Washington Post article, Richard Trumka, president of the AFL-CIO, compared unions’ attempts to organize Amazon to the elusive white whale in Herman Melville’s novel, “Moby Dick.” Problems with this literary allusion aside, it’s unclear what the AFL-CIO’s strategy is in this fight. “This is just the beginning,” Trumka said. “I can promise you this is not the last effort.”

We know there are big legislative initiatives by organized labor centered on the Protecting the Right to Organize Act (PRO Act). The PRO Act is a bill that organized labor is hoping will undo “Right to Work ” legislation. While there’s no question that passing the PRO Act would be an advance for workers, relying on the legislative approach and the Democratic Party to make change ultimately weakens the working class’s ability to fight the bosses. A major question in the case of the union fight in Bessemer concerns how labor leaders might be negotiating with politicians behind the scenes. Does the lack of mobilizations involve horse trading with Democratic Party leaders to win legislation for the PRO Act?

Today all organized labor should be making giant public declarations of solidarity to show Amazon workers that they are joining a vibrant and dynamic movement. They need a movement that not only organizes in Bessemer but takes on all of the Amazon warehouses and hubs, which employ 400,000 workers in the country.