Neither NATO nor Putin: How the U.S. Left is Getting Ukraine Wrong

With the Russian invasion of Ukraine, sectors on the Left are either repeating imperialist propaganda by calling for sanctions or minimizing Russia’s actions under the guise of anti-imperialism. To be anti-imperialist means to organize the international working class against U.S. imperialism and oppressive regimes everywhere. 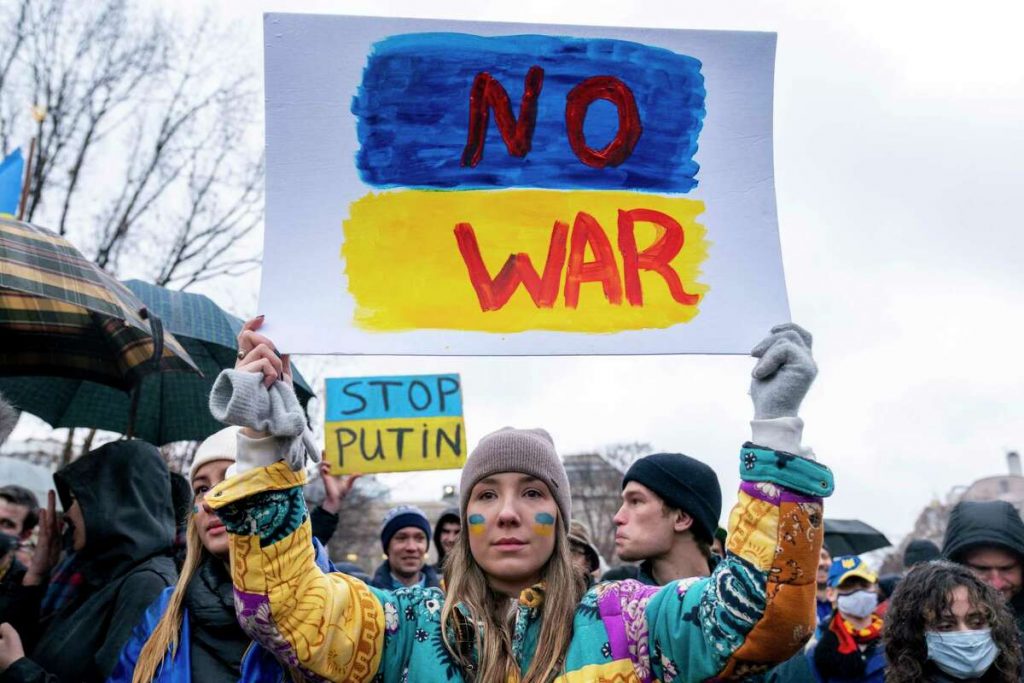 Over half a million people have been forcibly displaced and thousands have been killed since Russia invaded Ukraine last Thursday. While many on the Left have condemned this invasion, as they rightly should, they have sometimes done so in ways that wind up supporting U.S. imperialism. Meanwhile, a smaller section of the Left is openly ignoring or downplaying the crimes of the Putin regime, seeing the war as just an inevitable or even necessary response to NATO aggression. But Putin’s war on Ukraine will do nothing to weaken NATO’s expansion or limit the growth of far-right tendencies in the country. On the contrary, it is only further empowering the Right and NATO, all while upending the lives of millions of working people in Ukraine and Russia.

In the United States, many so-called progressives, including Senator Bernie Sanders, darling of the Democratic Socialists of America (DSA), are throwing their support behind Ukraine’s reactionary government and clamoring for sanctions against Russia. At Left Voice we have been exposing Sanders’ imperialist tendencies for many years, but his statements on Ukraine should be the nail in the coffin for any anti-imperialist socialists who supported him in the past. In a video posted to Youtube, Bernie Sanders called for “severe sanctions on Vladimir Putin and his government,” emphatically repeating the word “severe” for emphasis.

At the same time, prominent self-described socialists in Congress (many endorsed by DSA), such as Alexandria Ocasio-Cortez and other members of “The Squad,” are also lining up behind the policies of U.S. and NATO imperialism. On the eve of the invasion, AOC tweeted her full support for U.S. sanctions, stating unequivocally, “The U.S. is right to impose targeted sanctions on Putin & his oligarchs.” This is par for the course for AOC, who also failed to condemn U.S. aggression against Venezuela in 2019 and military aid to Israel last year. By supporting such sanctions against Russia, AOC and other members of The Squad are actively supporting U.S. imperialism, while also hurting the Russian working class — including the many people who are risking their lives to protest the war. In fact, some reports estimate that more than 6,000 Russians have been arrested for anti-war activities since the war began.

The Enemy of My Enemy Isn’t Necessarily a Friend

On the other side are those who correctly begin with a criticism of NATO and U.S. imperialism, but then tragically go on to simply ignore, downplay, or apologize for Russia’s invasion of Ukraine or the crimes of Putin’s autocratic regime. In the lead up to the war, for instance, the DSA’s International Committee issued a statement calling for an end to NATO expansionism, but completely ignored Russia’s buildup of forces on the Ukrainian border, the history of Russian aggression against Ukraine, Georgia, and Chechnya, or Russia’s support of reactionary governments in Syria, Belarus, and Kazakhstan. Of course, it is essential to call out the indisputable and oversized role that the U.S. and its NATO allies played in the lead up to the war. But to ignore the facts of Russia’s exploitation of its neighbors or Putin’s ambitions to re-establish a sphere of influence comparable to Imperial Russia is to abandon any kind of solidarity with the hundreds of millions of workers who will be hurt by such policies.

The DSA has since issued a public statement which openly condemns the invasion, but the autocratic nature of Putin’s regime or his brutal crackdown on LGBTQ and anti-war activists and protesters still receives no mention. Worse, its calls for “immediate diplomacy and de-escalation,” rather than the immediate withdrawal of U.S. and Russian troops from Europe and an immediate end to Western military aid to Ukraine, sows illusions that Russia and NATO can somehow come to an agreement that is actually in the interests of working people the world over.

Then there are those people on the Left who see the world as divided into ill-defined “camps” and who regularly view Russia and China as allies in the struggle against U.S imperialism. These voices have not just downplayed the role that Russian interests and Putin’s government have played in the conflict; they’ve entirely ignored that role. They claim that Russia had no choice but to invade Ukraine. They repeat Russian claims that the Ukranian government is run by Nazis and that the Russian invasion was at the behest of the peoples of Donbas. They insist that the annexation of Crimea was based on a legitimate democratic referendum, and that the conflict is exclusively the result of U.S. and NATO aggression.

The Black Agenda Report, for instance, has repeatedly apologized for Russian interventions abroad, including the disastrous role it played in the Syrian Civil War, and has gone so far as to argue that the Russian deployment of 150,000 troops in Ukraine should not be called an invasion. Repeating Russian talking points, it claims that these troops are not there for Russia’s interests, but are part of a “a special military operation in order to protect the people in these territories [Donetsk and Luhansk].” Positions like this are often put forward as part of a broader strategy in support of a form of “multipolarity” that welcomes the emergence of alternative powers around the world in response to U.S. imperialism. But the emergence of other global powers, particularly exploitative capitalist powers such as China, is not in the interests of working people and will do nothing to limit imperial conflict. The tragedy of such thinking is that it ties working people to the interests of capitalist states, trading one form of oppression for another.

This tendency among a sector of the U.S. Left to set aside or downplay criticism of any state or leader that happens to be on the receiving end of imperialist aggression is not a minor oversight, however, but a fundamental failure to recognize the importance of internationalism to any socialist project. Socialism, after all, is not a struggle between different states, but between irreconcilable classes. It is for workers’ control of society and production, and as such has nothing to do with support for such states as Russia or China, which continue to oppress their own populations. By focusing almost exclusively on the chess game of geopolitics and looking only at conflicts between states, such a worldview divides the working class into different competing groups, undermining international solidarity and the possibility of a collective struggle of working people everywhere.

Such campist tendencies have a long and sordid history that begins at least as far back as the Stalinist degeneration of the Soviet Union. Attempting to reconcile ongoing support for the USSR with Stalin’s purges and the later crushing of revolutionary workers movements in Hungary and Czechoslovakia, many Leftists — including members of the Communist Party USA — wound up defending these actions. They argued that public criticism of Stalin’s regime, or any attempts to overthrow Stalin, even when initiated by revolutionary workers, only gave ammunition to its imperialist enemies in the West. This logic was applied not only to the degenerated workers’ state of the Soviet Union, but was extended and continues to be extended to all kinds of unsavory governments and authoritarian regimes on the receiving end of Western imperialist aggression, including China, Iran, Syria, Cuba, North Korea, and Venezuela.

In the case of China, for example, many on the Left today continue to deny or apologize for the state’s persecution of Uighur Muslims in Xinjiang province. And they continue to portray China’s economic growth as a sign of it being a workers’ state, while ignoring the poverty and exploitation of Chinese workers or the fact that the membership of Communist Party of China includes capitalists and billionaires. Such a worldview makes it impossible to organize with or support true working-class opposition to the Chinese government. Another example is in the case of Syria, where apologists for Assad falsely denied that his government had used chemical weapons against its own people.

Anti-imperialism in its true sense means supporting and mobilizing the global working class against capitalist exploitation and imperialism. The threat of Western imperialism is very real, and the meddling of these forces to influence foreign affairs to their advantage cannot be denied. But if our goal is the overthrow of capitalism and the establishment of workers’ states, as it should be, then being apologists for repressive anti-U.S. regimes will not get us there. The anti-imperialist Left has to organize the international working class to take action not only against U.S. imperialism, but also against autocracy, capitalism, fascism, and imperialist tendencies everywhere. Without such solidarity, there is little chance of ever breaking the cycle of exploitation, poverty, economic crisis, and endless war that defines our age. In the current moment, this means building a global movement of the international working class to demand an end to the conflict, the exit of all Russian troops from the country (including the Donbas region), an end to U.S. sanctions and military support for Ukraine, an end to the rearmament of Europe, NATO’s exit from Eastern Europe, the removal of all U.S. forces from the region, and an independent policy in Ukraine to confront Russian occupation and imperialist domination.

Adnan Ahmed is a community psychiatrist in Minneapolis.