A new racist prosecutor in Macomb County, Michigan has charged six BLM protesters with misdemeanors three months after a march in October. Activists organized in Detroit Will Breathe and SHIFT in Michigan are fighting to have all charges dropped. 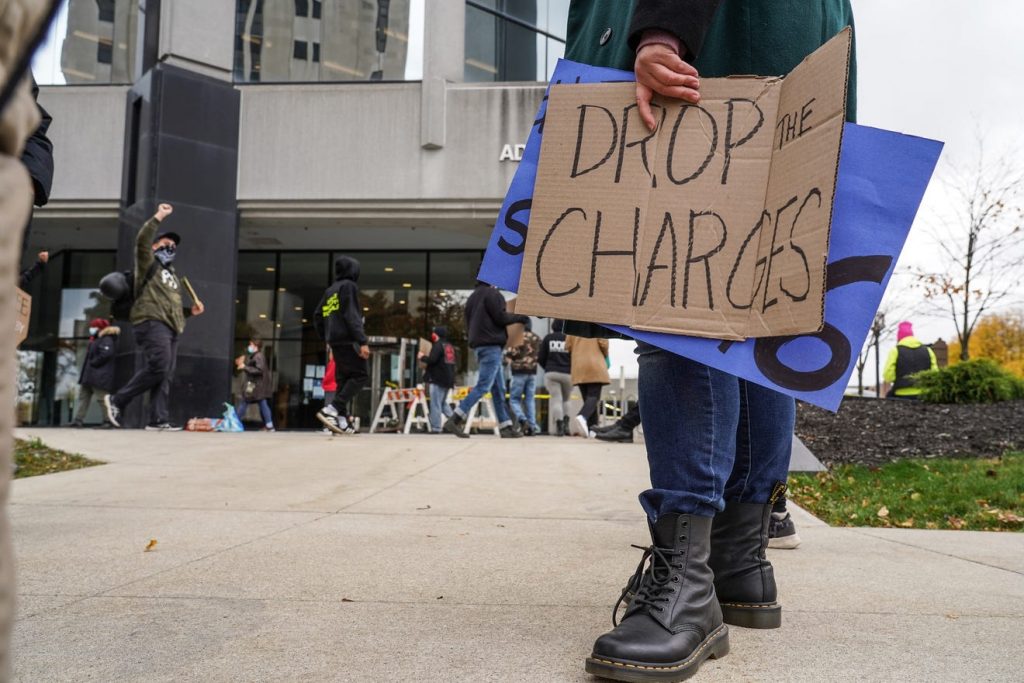 Activists and other community members protest outside the Macomb County Administration Building in Michigan to demand that demonstrators arrested at a protest on October 24 be released and all charges against them dropped. In January, six more activists were charged by Macomb County Prosecutor Peter Lucido for participating in the October 24 protest (Ryan Garza, Detroit Free Press).

Back in May 2020, Shelby Township Police Chief Robert Shelide made racist and violent remarks toward Black Lives Matter protesters on his personal social media page. In these comments, he called protesters “wild savages” and “vicious subhumans” that deserved to be in “body bags.” This vile and racist language evokes stereotypes of Black people that have emboldened right-wing violence towards the BLM movement like that of Kyle Rittenhouse. After only one month of suspension for his comments, the Shelby Township Board of Trustees voted 5:2 to allow Shelide to resume serving as chief. This type of leniency encourages right-wing extremists to get more and more comfortable carrying out violence, not just in Macomb County, but throughout the nation — for example, on January 6 at the U.S. Capitol.

After months of protesting, Detroit Will Breathe united with the Shelby Township BLM organization, SHIFT — Suburban Solidarity for Social Justice, to contest Chief Shelide’s leadership and demand accountability for the Jim Crow-style climate of racism in Shelby. On Saturday, October 24, 2020, both organizations led a nonviolent march to demand Shelide’s removal or resignation. This march was immediately attacked by five different police departments, K-9 units, and SWAT operatives that attempted to trample over the basic right to protest. In addition to being met with riot shields and brutality, five protesters were charged with felonies and others received tickets for misdemeanors.

Throughout the march, activists were stalked and harassed by armed civilian militias who were not met with the aggressive force that protesters were. This sent a clear message that not only are Black and Brown people unsafe and unwelcome in Shelby Township, but that right-wing extremists have an ally in the Shelby Township Police Department. This type of allyship between right-wingers and the police is something we have seen throughout the country across both red and blue states. Just as activists denounce the white supremacy and racism perpetrated by the police, they must also speak out against the silence and inaction of elected officials and representatives who are complicit in the violence perpetrated by the state and its right-wing allies.

SHIFT and Detroit Will Breathe have continuously fought to get these charges dropped, but the new Macomb County prosecutor, Peter Lucido, has chosen to co-sign the segregationist tactics used to criminalize protesters. On January 25, six additional activists were served warrants for their participation in the October action, three months after the fact. These charges showcase political violence and retaliation in response to the backlash officials received following the storming of the Capitol. Those who participated in the events at the Capitol were lightly reprimanded and told to go home, whereas Black and Brown people face severe consequences for exercising their right to peacefully assemble. Detroit Will Breath and SHIFT have made sure to point out these hypocrisies as they fight to get these charges dropped. These protesters are the most recent targets of the Jim Crow-style intimidation tactics being deployed to silence the BLM Movement. Furthermore, these new charges and the City’s refusal to address racism are one more chapter in the history of Shelby Township as a “sundown town” that will do anything it takes to maintain and guarantee white supremacy.

Join Detroit Will Breathe and SHIFT to demand that these intolerable charges be dropped immediately and reject the standard of “law and order” that has made way for police brutality and hyper-militarization. The Movement for Black and Brown Lives will not be silenced into backing down to bullies with badges or the politicians that work to uphold white supremacy.