Earlier this week, museum workers at New Museum mobilized for a better contract. 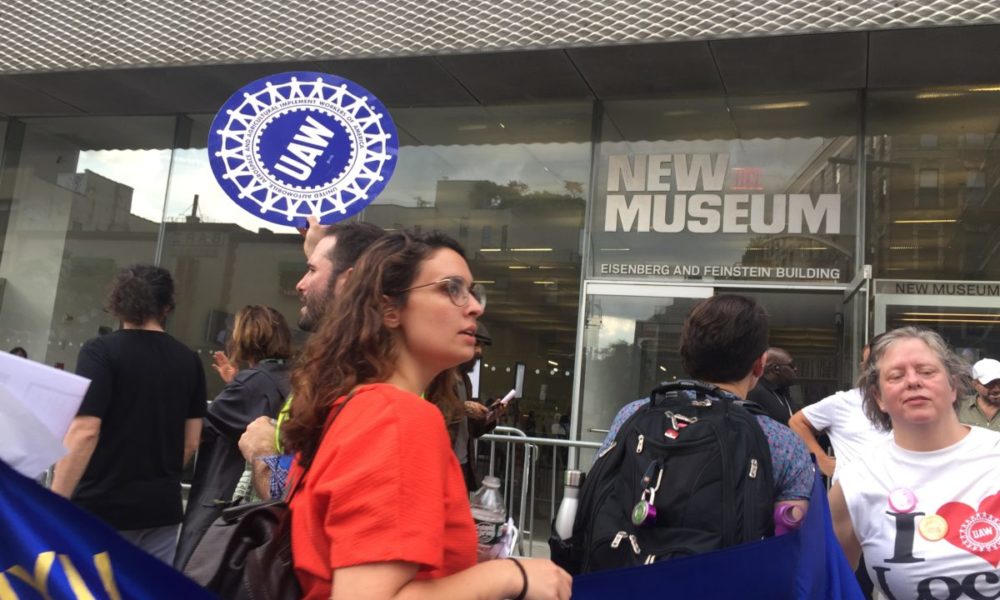 The New Museum of Contemporary Art sits on the corner of Spring and Bowery Streets, its strange architecture and grey paneling a stark contrast against the short brick structures on either side. There is a feeling that the building was dropped authoritatively on top of whatever stood there before. But on the evening of June 25, as wealthy trustees flocked toward the museum to kick off the Summer 2019 exhibit, the broad, dull-colored edifice seemed to shake and recede as it was rocked by worker mobilization.

At around 5:40 PM, New Museum employees and their allies began to assemble on the sidewalk directly in front of the broad windows that look out from the building’s bottom floor. The workers—who voted 38-8 in favor of joining United Automobile, Aerospace, and Agricultural Implement Workers of America (UAW) Local 2110 on January 24—passed out signs that read: “Hell Yes! Healthcare for All” and “Union Forever!” Those working during the exhibit’s opening night sported union buttons as they stood at the front desk.

Union members from across New York City gathered quickly to support the struggle at the New Museum. Unionized employees from the Museum of Modern Art chanted in solidarity, adjunct professors and graduate students carried a banner in support, and a few union ironworkers came directly from their jobs. Someone even ordered a stack of pizza. By 6:30, when the wealthy donors and their friends began to arrive for an evening of wacky outfits, wine, and fancy finger food, between 200 and 300 protesters were picketing and interrupting their soirée.

The June 25 action was the result of months of agitation by workers and UAW organizers. Most employees at the New Museum make $15.00 / hour, the minimum hourly wage for New York City. According to the Massachusetts Institute of Technology’s living wage calculator, this not enough to sustain a single adult in New York City, and it is less than half of what is necessary for a worker to support a child. Dana Kopel, a member of the union organizing committee, has said that exploitative bosses deny even this inadequate level of wages, citing the illegal practice of museum employers refusing to allow staff to record overtime hours so that they cannot be fairly compensated. The museum’s director Lisa Phillips, on the other hand, earns around $600,430 per year according to Bloomberg News. She also pledged $85 million to build a brand new museum building across the street after a major fundraising campaign which has not, apparently, benefited staff in the slightest. This stark inequality pervades the institution: a generally wealthy clientele visits a collection curated by well-paid individuals, while workers who are equally passionate and talented struggle to get by.

It was this clearly exploitative dynamic, coupled with precarious healthcare for part-time workers, that drove New Museum employees to begin organizing towards building a viable union chapter. Since then, the museum—which was initially founded as an act of rebellion against elitist and hierarchical art institutions—has led an aggressive union-busting campaign to quash its workers’ pursuit of equity. After employees submitted a letter to the National Labor Relations Board, the New Museum hired the firm Adams Nash Haskell & Sheridan as union-busting consultants. The company specializes in helping management build a “union-free future” by attacking workers with legal jargon and outright lies. According to New Museum employee and organizer Lily Bartle, management also promoted specific workers in order to remove them from the bargaining unit.

And union members assert that, even after all these dirty tricks, the New Museum still refuses to engage in fair collective bargaining as is its responsibility under U.S. labor law. On June 18, seventy workers signed a letter demanding that their employer bargain in good faith, but they received an inadequate response. During their picket on June 25, protesters made clear that if the museum does not respect their rights, they intend to “shut it down, shut it down”.

As the picket drew to a close at around 8:30 PM, UAW Local 2110 President Maida Rosenstein called the crowd in for a few closing remarks. Cries of “Shame! Shame!” erupted as she recounted how many steps management has taken to avoid paying their fair share. Firetrucks, plumbing vans, and transportation vehicles honked in support as they passed a sea of UAW logos. Rosenstein linked the movement at the New Museum to struggles for justice at various other cultural institutions in New York City. In April, workers at the Tenement Museum voted to join UAW Local 2110. Earlier this month, on June 12, workers at the Solomon R. Guggenheim Museum also submitted a petition for union recognition. Rosenstein declared that organizing like this would turn New York City into a “union town”.

Museum employees in New York City have played a central role in challenging elitist institutions that rely on “progressive” reputations while engaging in exploitative and reactionary practices. In November, 2018, for instance, workers at the Whitney Museum of American Art submitted a letter to their Director, demanding the resignation of Vice-Chairman Warren Kanders. They had recently found out that he owned Safariland, the company that manufactures tear gas used against migrants along the U.S.-Mexico border and against protestors in Puerto Rico and Palestine. This expression of solidarity helped launch a decolonialization movement led by a group called Decolonize This Place, which continues to call for Kanders’ resignation, as well as for a broader investigation of the Whitney’s sources of funding.

Union power, in coordination with anti-racist, anti-colonial solidarity, presents a means for the reclamation of museums by the people who have historically been at the center of cultural production. Workers, queer folks, people of color, and communities under the heel of U.S. imperialism have been systematically excluded from institutions of art and culture as museums have been traditionally maintained as playgrounds for the wealthy. Those organizations have benefitted from stealing the artwork of colonized peoples and then applying an “inclusive” veneer that appeals to a predominantly white, “liberal” upper class.

On June 25, New Museum employees defied this injustice and they stated firmly that their labor will not be the unchecked source of the museum director, Lisa Phillips’ wealth.