New Orleans Looks Out for Big Business, Not Residents in Ida’s Wake

Another major hurricane has battered the South. But instead of providing the relief residents need, authorities are deploying “anti-looting” police to discipline the region’s poorest — overwhelming Black folks. 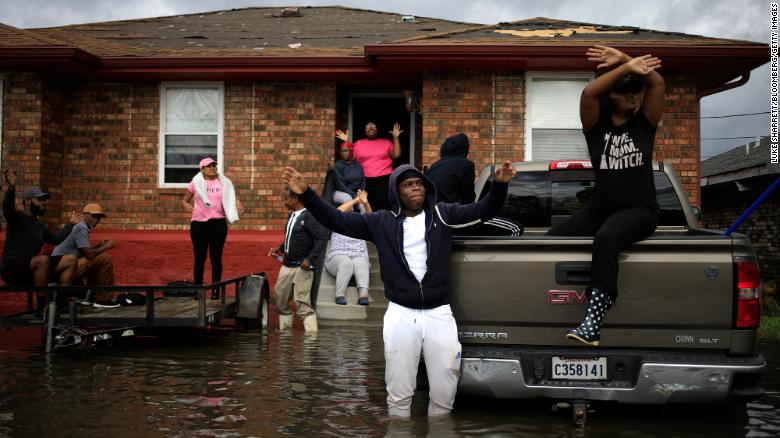 Residents wave to a U.S. Coast Guard helicopter while waiting to be rescued from floodwater left behind by Hurricane Ida in LaPlace, Louisiana, U.S., on Monday, Aug. 30, 2021. The storm, wielding some of the most powerful winds ever to hit the state, drove a wall of water inland when it thundered ashore Sunday as a Category 4 hurricane and reversed the course of part of the Mississippi River. Photographer: Luke Sharrett/Bloomberg

The list of deadly extreme-weather events this century tragically continues. Tropical Storm Ida — previously Hurricane Ida — is now lashing the southern United States. It has already inflicted widespread damage on Louisiana, Mississippi, and Alabama. We can expect other regions, including the Florida Panhandle and the Tennessee Valley, to feel the storm’s impact this week.

A Storm of 21st Century Proportions

Ida, one of the most powerful storms on record, made landfall on Sunday as a Category 4 hurricane, with 150-mile-per-hour sustained winds. New Orleans, hit by so many hurricanes in recent years, is again suffering some of the worst effects. The storm ripped roofs off of homes, toppled trees and powerlines, and reduced brick buildings to rubble. Winds knocked down the region’s main electrical tower, leaving nearly the entire city without power. The emergency room and operating room at St. Charles Parish Hospital were “destroyed,” according to officials. In Jefferson Parish, just outside the city, many residents are trapped in their attics as floodwaters have risen as high as seven-and-a-half feet. Parish officials say it will be at least three weeks before power can be restored and five days before running water comes back on.

The Poor Suffer Most, Again

Once again, it is working people, the poor, and people of color who are suffering most from this climate-related disaster. States and municipalities ordered evacuations but offered virtually no financial aid to residents to seek shelter elsewhere. With poverty rates in the region among the highest in the country, relatively few residents can afford to pay for hotels, for out-of-town flights, or to stock up on food and essential goods. Prolonged electrical outages mean residents will also be without air conditioning and fans during some of the hottest weeks of the year.

Ida, of course, arrived in the midst of the global coronavirus pandemic, hitting a region already facing the brunt of the Covid-19 public health crisis. Louisiana and Mississippi have some of the lowest rates of vaccination in the United States Less than half of the states’ residents have received even a first dose of the vaccine. Mississippi residents are more likely to die of Covid-19 than people anywhere else in the country. Even before seeing Ida, hospitals reported that 85 percent of their beds were full. Now, with low vaccination rates, the highly contagious Delta variant, and residents forced to gather in crowded shelters and relief stations, the conditions are prime for a new wave of Covid outbreaks.

Despite the urgent needs of residents in the South, cities such as New Orleans have instead put money into police patrols to prevent looting of businesses after disasters. So while food rots as they protect supermarkets and department stores, officials leave residents to go hungry. After Hurricane Katrina struck exactly 16 years ago, police and the National Guard were deployed and, during the chaotic aftermath, cops were given the go-ahead to shoot looters. City police killed two people, including a 17-year-old boy, and wounded several on Danziger Bridge. As usual, the police made clear their role as the protectors of private property, not the people.

Failing to learn the lessons of Katrina, New Orleans again announced plans to deploy “anti-looting” officers around the city this week to deter people from entering private businesses during the power outage. In these desperate conditions, the city is not prioritizing the survival of its people but instead sending heavily armed police to brutalize those seeking food, water, clothing, and other basic goods. It’s one more example of the city criminalizing low-income communities when they need help and resources the most.

It’s Always the People Who Are Out of Luck

The connection between climate change and extreme-weather events such as Ida has never been more clear. Indeed, the high temperatures in the Gulf of Mexico’s waters this summer have created ideal conditions for rapidly intensifying storms. Despite this, the Biden administration, just like the Trump administration before it, has refused to take meaningful climate action. In fact, the Biden White House has greenlit several new gas and oil pipeline construction projects, including the Line 3 Pipeline that crosses indigenous lands in Minnesota. Earlier this month, Biden pressured OPEC to increase extraction in order to shore up global oil prices. Though emissions dipped in 2020, scientists expect to see emissions return to their pre-pandemic levels by the end of 2021. Fossil fuel extraction continues even in the face of increasingly deadly events.

After environmental disasters, it’s working-class people and the poor who always suffer, never the rich. Following Hurricane Katrina, most New Orleans residents were left to starve and face police brutality, while private military contractors such as Blackwater descended on the city to profit from the destruction. City officials, meanwhile, used the crisis to hand over the public school system to private educational management organizations. All schools in the city are now charter schools, with the majority of these non-union.The number of Black teachers has fallen dramatically. With only paltry federal and state aid, many of the city’s poorest residents weren’t able to go back to their homes. One in three Black residents of New Orleans never returned. We can expect many of the same consequences (or worse) after Ida.

Rather than pouring more resources into criminalizing the working class, we must demand real aid for the people most affected by Ida and other extreme-weather events. This means financial aid for evacuation or resettlement, the employment of thousands to carry out rescue operations and distribute food and basic goods, complete defunding of the police, and the allocation of money to rebuild the city’s infrastructure.

Furthermore, to truly confront the climate emergency, we must address its roots. Taking on this crisis requires nationalizing the assets of the major fossil fuel companies under workers’ and consumer control and transitioning to 100-percent renewables as quickly as possible. We need massive public works projects to upgrade and modernize the energy grid, create climate-resilient yet energy-efficient homes, and develop clean, fast, and free public transit.

In short, we need a system that serves working people, the poor and the planet, not the wealthy ruling class and the huge corporations.