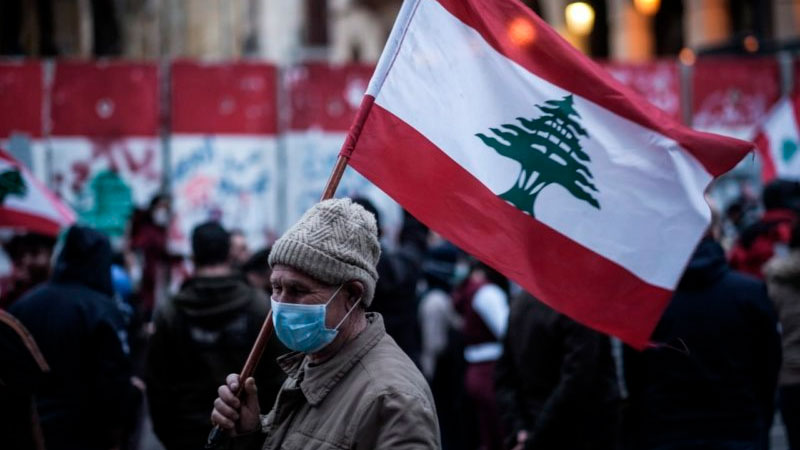 Since April 21, Lebanon has once again been the scene of antigovernment protests under the banner of “Zaura!” (revolution in Arabic). Dozens of demonstrators in Beirut and several other cities broke quarantine rules to protest in front of the Lebanese Central Bank, after the country’s currency, the lira, went into free fall.

The demonstrations before the mandatory quarantine in the former French colony were centered around the precarious conditions in which a large part of the population currently live. Ninety percent of Lebanon’s 7 million inhabitants cannot cover their basic living expenses, surviving on remittances sent by relatives from abroad in dollars. At the same time, there are 1.7 million refugees of Palestinian and Syrian origin who depend on daily work for food, as well as migrant women, most of them Ethiopian, who are exploited under the kafala system, a system that allows workers to be beholden to their employers who sponsored their visas. The arrival of the pandemic gave Lebanon’s government an opportunity to halt demonstrations, but the Lebanese masses are still under enormous strain every day.

Until a week ago, remittances sent to Lebanon could be withdrawn in dollars. As of April 21, however, all transfers must be withdrawn in local currency at the “market rate” set by the Lebanese Central Bank. This tripled the “unofficial” exchange rate, from 1,507 Lebanese lira to the dollar to over 3,600 lira to the dollar, reaching a historic high, with inflation at 27 percent and a 50 percent depreciation of the currency. Moreover, this measure will impact the price of basic products such as food and medicine, suffocating thousands of families.

Facing deteriorating conditions, crowds of Lebanese people broke their government-sanctioned quarantine to line up in front of banks and money transfer offices like Western Union and MoneyGram, trying to withdraw their dollars on the last day before the Central Bank’s announcement. The situation quickly turned into a de facto demonstration involving confrontations with the police.

The streets of Beirut were once again flooded with people demonstrating against the worsening economic and social conditions in the country. Even in Beirut’s Martyrs’ Square, where uprisings first began in October against a ruling class that has been in power since the end of a civil war in 1990, there was a caravan of cars chanting and raising Lebanese flags in protest.

On October 26, demonstrations took place in Beirut, Tripoli, Chekka, Zalka, and Saadiyat, where barricades were erected to block the Palma bridge between Tripoli and Beirut and tires were burned. This past Sunday night, two banks were attacked with Molotov cocktails. Banks were targeted because of the hatred they generate among the Lebanese masses as institutions responsible for the economic situation. In Lebanon, the main economic activity is in financing, speculation, and money laundering for the Arab world — making the banking industry particularly culpable. In Sidon, the demonstrators confronted the police in front of the Central Bank’s headquarters.

Meanwhile, Human Rights Watch warned that hundreds of thousands of Lebanese could go hungry if the government does not provide a robust aid program. A cash assistance program, which promised a one-time donation of 400,000 lira to the neediest, never materialized, leaving hundreds of thousands to starve. Government officials have failed to find a consensus on a financial rescue plan that can support social aid programs. March was the first time in Lebanon’s history that the country defaulted on its debt payments, leaving the country in a vulnerable position when negotiating new financing.

Whether it’s a debt crisis or sanctions, Lebanon, like other semicolonial nations, are facing the pandemic with limited access to resources. These structural problems are exacerbated by a sect-based political order that came into being after the civil war ended in 1991. Mired in corruption, today power is in the hands of the Shiite Islamist parties Hezbollah and Amal, together with their allies. Among these allies is the Free Patriotic Movement, a Christian party representing expatriate interests that organized social assistance during the pandemic, though in October they supported the repression of Lebanese protesters. It remains to be seen if they will again respond in the same way.

Under the slogan “We will not pay the price,” in reference to the $90 billion public debt (the largest proportion of debt in the world, or 170 percent of Lebanon’s GDP), Lebanese demonstrators took to the streets to denounce an economic crisis that had taken hold well before the current crisis. Beginning with an unusual tax on WhatsApp users to generate government funds, the working class rose up to ruling-class pressure.

Before the pandemic, the World Bank estimated that 40 percent of Lebanon’s residents live in poverty and at least 200,000 people are unemployed. Unemployment is due to rise even more as economic conditions continue to deteriorate around the world. The return to the streets by protesters, who are defying restrictive measures, suggests that class struggle will once again take center stage in Lebanon. As one activist who participated in Sunday’s protests said, “We realize that we are living in the time of a coronavirus pandemic, but hunger is much worse than the coronavirus.”

First published in Spanish on April 27 in La Izquierda Diario.