Housing is a human right. Chinatown residents are facing increasing gentrification and displacement. Despite his discourse on the “Tale of Two Cities,” de Blasio’s urban policies still benefit big developers at the expense of the working people. 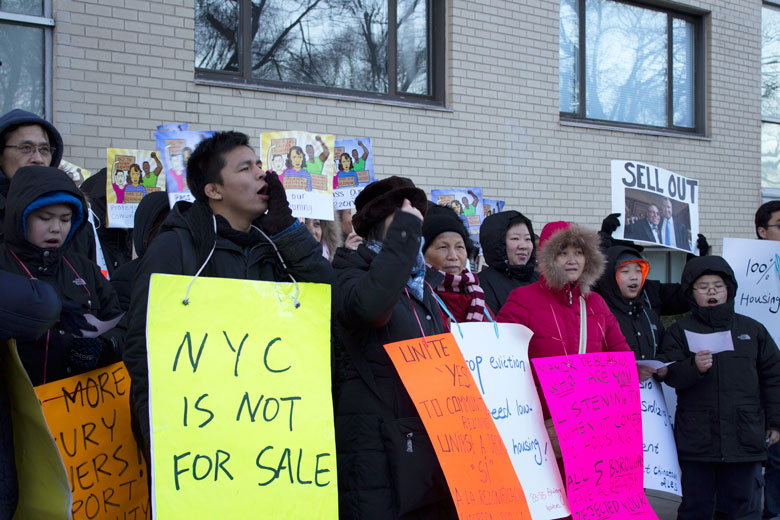 This article was originally published in Bedford & Bowery on Feb 19, 2016


It was freezing outside, but the 60-odd Chinatown community activists gathered in front of Gracie Mansion yesterday were fired up. In English, Spanish and Chinese, they decried Mayor de Blasio’s rezoning plan and ties to the real estate industry, flinging insults and calling for his resignation.  “Coward!” “Racist!” “Shame!” they yelled. As the sun set, they even left him with a “gift.”

The Coalition to Protect Chinatown has long been pushing a community rezoning plan they say would safeguard their neighborhood from more tall luxury buildings (like Extell’s One Manhattan Square ). And their effort takes on increased urgency as City Council deliberates  over Mayor de Blasio’s own zoning and affordability proposals, which would greatly relax height limits all over the city.

The mayor, trying to reach his goal of 200,000 new affordable housing units in 10 years, argues the plan aims to harness market forces already at work to guarantee more mixed-income buildings. It would rezone over a dozen neighborhoods to allow for taller construction but require all new buildings, regardless of height, to reserve 30 percent of units for affordable housing (the current system requires 20 percent affordable housing only if developers choose to build higher). But coalition members say that tall buildings would only hasten displacement in low-income neighborhoods, as a glut of huge, mainly-luxury towers warps the market and street life of the area even more. Instead, they want more height protections and investments in NYCHA and low-income housing.

Last week many council members also expressed reservations  about the mayor’s proposal, saying affordability levels were not deep enough for the neediest and that taller high rises could destabilize communities. But on Wednesday Chinatown’s council member Margaret Chin spoke in favor of the plan on NY1 , arguing it is necessary to build more to increase affordable housing stock.

“We need more affordable housing, especially for seniors,” she said. “So we’ve got to work together, get some quick action and find a solution to build as much affordable housing as we can as soon as possible.”

Meanwhile, the Coalition doggedly continues to advocate for their own rezoning plan, which was developed over seven years in conjunction with the Pratt Center for Community Development . At the rally, activists from Queens, the Bronx, and Harlem attended in support. People wore signs that said “NYC is not for sale,” “Sell out” and “Stop racist city planning now!”, some with pictures of De Blasio posing warmly with former Real Estate Board president Steven Spinola.

“Mayor de Blasio, we elected you, we thought you were going to fight for us, but instead you are all cozy-cozy with developers. What’s up with that?” said Francisca Benitez from the Coalition, speaking to the crowd. “We have invited the mayor to speak with us and he doesn’t speak with us. Meanwhile the mayor has no problem to wine and dine with the Real Estate Board behind closed doors!”

She was referring to the Coalition’s frequent efforts  to meet with the mayor about their rezoning plan. In December they even held a “Town Hall ,” demanding to see him. The hundreds who attended got riled up when only a representative from de Blasio’s office showed up.

“Everybody knows: his housing plan is nothing but a big scam,” said David Tieu, another Coalition representative. “Hundreds of people have testified against this plan, not even the community boards support it! Only the developers do. And he thinks he can get away with it. Why? Because he has people like Margaret Chin and the rest of City Council in his back pocket.”

Community leaders, joined by children, marched to the gates of Gracie Mansion to present their “gift”: a poster of the 80-story Extell One Manhattan Square tower that read “Extell = Building from Hell,” on the front. On the back, a note: “To Mayor de Blasio: You are evil to give us this building. We reject it and we are giving it back! – The People.”

Some of the speakers also called for the Attorney General to investigate de Blasio’s relationship with the real estate industry and Extell. After the rally, I asked Tieu what reasons they had to suspect foul play.

“To me it makes perfect sense, why else would he reject a community-based rezoning plan after so many people have publicly spoken out in support of it?” he said. “Meanwhile he’s allowing this 80-story skyscraper to come in.” He also pointed to the recent conviction of long-time Downtown district leader and assembly speaker Sheldon Silver for fraud, money laundering and extortion as evidence of the widespread corruption in New York’s politics and real estate worlds. “You know, I personally feel that there’s probably a deeper connection that the public is unaware of. I think it’s only right, it’s only fair, that our community knows if there is such a thing,” he said.