At Friday’s protests against the police murder of George Floyd, NYC bus drivers were called upon to transport arrested protesters. The bus drivers refused. Unions must develop this solidarity towards a strike against police brutality. 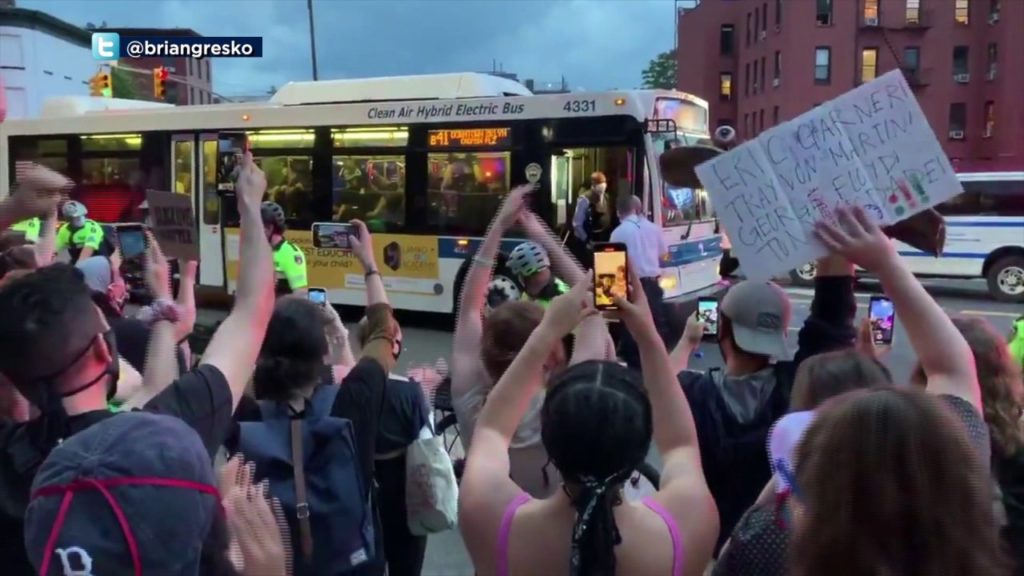 Throughout the country, people are protesting against the brutal police murder of George Floyd, as well as the recent murders of Breonna Taylor, Sean Reed, and Ahmaud Arbery. Bowing to enormous public pressure, Floyd’s killer Derek Chauvin has been arrested in an attempt to quell the unrest, but protests have continued. These have been met with harsh repression, with police deploying tear gas and arresting protesters en masse — tactics that are especially violent during a pandemic. This was the case in Brooklyn on Friday night, as New York police cracked down on protests erupting near the Barclays Center. But sectors of the organized working class are already demonstrating solidarity with the protesters.

In a video that has since gone viral, a crowd cheers as an operator from the Metropolitan Transportation Authority refuses to drive a bus filled with arrested protesters, in a move similar to that made by bus drivers in Minneapolis.

The NYPD is using a bus to transfer arrested protesters at the Barclays Center.

However the bus driver refused to drive it. pic.twitter.com/Pqx4Nv8JhG

The Transit Workers Local 100 tweeted a statement giving their official position on the matter: bus operators transport the working families of NYC. They don’t work for the cops.

TWU Local 100 Bus Operators do not work for the NYPD. We transport the working families of NYC , all TWU Operators should refuse to transport arrested protestors. @Josmar_Trujillo @ClaytonGuse @CentralLaborNYC @TwuSamuelsen @TTDAFLCIO #JusticeForGeorgeFlyod

It is an incredibly powerful example of how sectors of the working class in strategic positions can be in solidarity with mass movements. However, it gestures towards the enormous, and as yet untapped power held by the working class: what does it look like for the working class to take up these demands as their own?

Many of the NYC transit workers are Black and Brown. Their communities are brutally policed and the targets of state violence. Transit workers are essential workers whose lives have been placed on the frontlines of the coronavirus pandemic without necessary protection, leading to far higher rates of infection and death from Covid-19 in the MTA than in the general NYC population. The reopening of the economy, the impending budget cuts, the racist police brutality: these are all attacks on the working class.

Sectors of organized labor have already demonstrated solidarity with the protests; developing this further could be key to forcing accountability from the state. All of the concessions that have been made thus far are due to the tremendous public pressure that protests have been exerting. Unions must link up with the masses in the streets to continue to exert that pressure, taking up the demand of Justice for George Floyd, Breonna Taylor, Sean Reed, and victims of racist violence, like Ahmaud Arbery. Unions must take up the fight against racism and strike against police brutality.