Amid election week, hundreds of protestors in the West Village are protesting the undemocratic U.S. regime. Some of these demonstrators have been violently attacked, kettled, and arrested by NYPD cops in full riot gear. 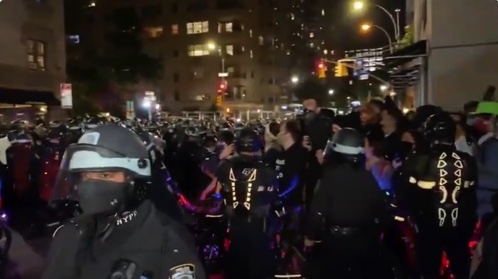 While the results of the election are still pending, activists throughout the country have already taken to the streets to protest the undemocratic U.S. system. In New York City, there were protests throughout the day on Wednesday, including the “Everybody Out!” rally in Washington Square Park at 7 PM. This protest led to fierce repression at the hands of the NYPD.

“No matter what goes down on Election Day, we will gather this Wednesday and every Weds until Jan 20. Until the fall of the regime…” stated a flyer for the event. Around 500 protesters from different groups gathered at the park, which was already surrounded by a considerably greater number of police in helicopters, vans, unmarked cars, and unarmored bicycle suits.

After a march throughout the West Village, with demonstrators chanting “No more presidents,” the NYPD violently attacked, kettled, and arrested a large group of protesters. Left Voice reporter Sarah, covering the protests, was shoved by police.

As of this writing, there continues to be heavy police presence in midtown Manhattan.

Hundreds of protesters who’d gathered in West Village in NYC tonight are being violently attacked, kettled and arrested by the NYPD.#Elections2020 #NYCprotests #ACABpic.twitter.com/OqPq6ekfpC

Mirroring the repression sanctioned by Democratic politicians against Black Lives Matter protesters in the summer, this latest episode of violence overseen by Bill de Blasio — also a Democrat — is another example of how the bipartisan regime attempts to stifle protests, especially the ones that challenge the character of the racist, capitalist system. As protests continue in the midst of the pandemic, economic crisis, and elections, socialists must denounce the repression and defend protesters at every turn.