New York Drivers Pushed to Suicide in the “Gig” Economy

On Monday morning, long-time professional driver Douglas Schifter drove to City Hall and shot himself. Brother Schifter took his life out of desperation, but also out of protest. 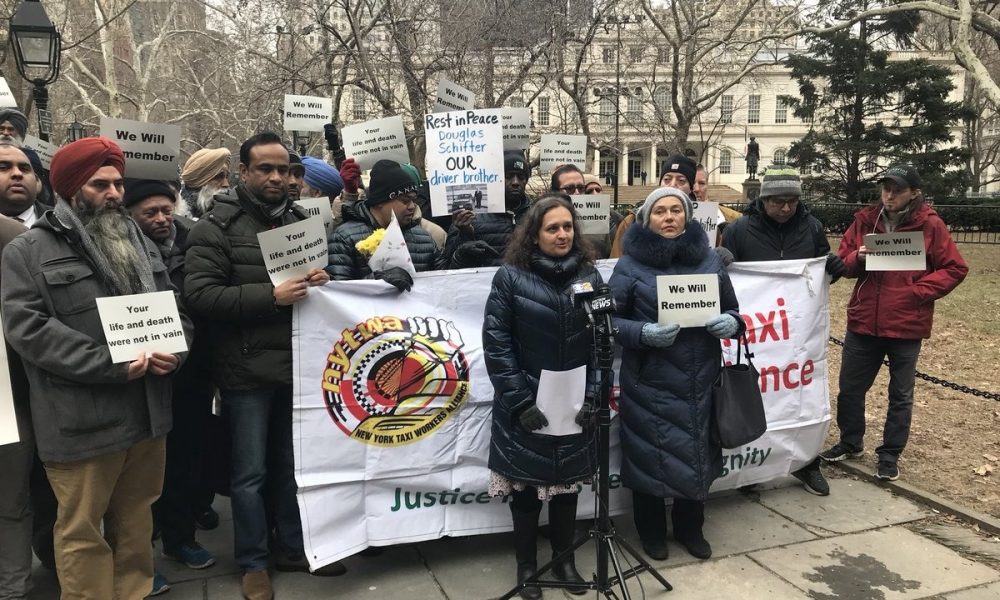 His suicide note is an articulate condemnation of the social crisis in New York and the blood-sucking corporate and political interests that prioritize profit over people.

A vigil was held for Schifter at City Hall on Tuesday very near where he took his life. Signs read, “We will remember” and, “Your life and death were not in vain.” The gathering also remembered Danilo Corporan Castillo, a Bronx livery driver who jumped to his death just weeks before, as well as a third driver whose name has not been disclosed who also ended his life in recent months. Indeed the situation has become bad enough that the New York Post had an article titled, “Why More Cabbies Are Killing Themselves.”

The economy in New York is supposedly thriving and the minimum wage is (oh-so-slowly) rising, yet homelessness has hit unprecedented levels and untold numbers are being pushed out of the city completely, unable to afford the sky-high price of living. Workers in the taxi, livery and black car industry have been hit especially hard, as deregulation has flooded the streets with Uber vehicles, and the app companies (Uber, Lyft, Juno, Via) are able to pay drivers well below yellow cab rates. Statistics show that across the nation, app-based drivers often make below the minimum wage and almost never receive benefits.

Before taking his life, Douglas Schifter wrote a lengthy facebook note that explained his personal situation, identified how he had become impoverished, and laid blame squarely on the political establishment and the corporations. The note began,

“I have been financially ruined because three politicians destroyed my industry and livelihood and Corporate NY stole my services at rates far below fair levels. I worked 100-120 consecutive hours almost every week for the past fourteen plus years. When the industry started in 1981, I averaged 40-50 hours. I cannot survive any longer with working 120 hours! I am not a Slave and I refuse to be one.

Companies do not care how they abuse us just so the executives get their bonuses. They have not paid us fair rates for some time now. Due to the huge numbers of cars available with desperate drivers trying to feed their families they squeeze rates to below operating costs and force professionals like me out of business. They count their money and we are driven down into the streets we drive becoming homeless and hungry. I will not be a slave working for chump change. I would rather be dead.

Bloomberg, deBlasio and Andrew Cuomo have each had their part in destroying a once thriving industry. There are over 100,000 of us suffering daily now. It is the new slavery.”

Schifter goes on to explain the reality for countless drivers: while the livelihood of drivers has been decimated by deregulation and the removal of the cap on the number of authorized vehicles allowed on the road in particular, drivers face increased policing by NYPD, TLC agents and even state troopers. Whereas companies like UPS and FedEx pay for tickets as a daily business expense, the app companies have transferred such costs onto the individual driver. Tellingly, Danilo Castillo’s suicide note was scribbled onto the back of a TLC summons for picking up a street hail where he wasn’t supposed to.

“Wake up and resist!”

Whatever shortcomings or misguided views are present in Schifter’s suicide note, the overarching critique is spot on. After rightly criticizing the Democratic Party leaders de Blasio, Cuomo and Bloomberg, the note paints a picture of New York becoming increasingly a “police state” where cops lie, politicians are in the pocket of big business, and things are getting worse – capturing the suffocating feeling of being pressed into wage slavery with no way out.

“I know I am doing all I can the rest is up to you. Wake up and resist!” wrote Schifter in the last hours of his life. The call to action must be urgently taken up.

The content of our fellow driver’s suicide message speaks for itself and touches a deep reality. Douglas Schifter’s tragic decision to die must be viewed as a political act, not merely a mental health breakdown as Mayor de Blasio would have us believe. In this sense, his suicide is reminiscent of Mohamed Bouazizi, the Tunisian vegetable seller who set himself on fire out of protest and was a catalyst for the ensuing Tunisian uprising.

We can best honor Danilo Castillo, Douglas Schifter and other drivers by fighting back against the political establishment that rules New York, and against the super-wealthy interests they serve. When the roughly 100,000 drivers get organized and take action, we will be a force to reckon with, and we can change the conditions that are leading to such tragedy.

*Ben Fredericks has been an app-based driver for 8 months and recently joined the New York Taxi Workers Alliance.