Ten thousand nurses at four hospitals in NYC will strike on April 2 unless management improves their offer. Their main demand is safe staffing ratios. 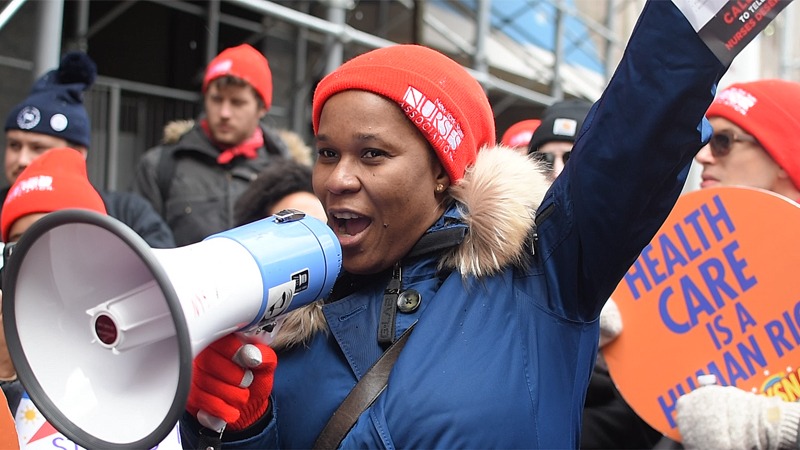 On Sunday night, the New York State Nurses Association (NYSNA) announced on its facebook page that nurses from three major hospital systems in New York City will go on strike beginning April 2. The official strike notice will be delivered to the four facilities Monday morning, followed by a press conference at Mount Sinai Medical Center.

The decision comes after nearly five months of stymied negotiations between NYSNA and the management of the four hospitals that are holding joint bargaining sessions–Montefiore, Mount Sinai, New York Presbyterian-Columbia and Mount Sinai West/St. Luke’s. The latest offer from management includes a three percent annual increase in wages, but no concessions in terms of working conditions, staffing ratios or health benefits. Furthermore, the wage hike would not be retroactive to December 31, when the contract expired, and is contingent on hospital funding tied to the New York State budget.

Nurses’ demands center on conditions for patient care. Working 12-hour shifts and chronically understaffed, most hospital nurses endure strenuous working conditions, high rates of occupational injuries and daily workplace violence. It is not unusual for nurses to miss their breaks or stay overtime to complete documentation.

As negotiations dragged on, rank-and-file nurses have become increasingly ready to strike. Earlier this month, 97 percent of members at “the big four” voted to authorize a strike that would affect some of the most profitable private hospitals in the city and send a threatening sign to other healthcare facilities. According to NYSNA, members of the Brooklyn Hospital Center are voting this week to join the strike, and other hospitals are expected to follow.

After years of setbacks, decreasing real wages and declining union membership, U.S. labor is showing tangible signs of revitalization. The teachers’ strike wave showed the power of workers’ unity in action. Now New York nurses are preparing to flex their muscle. It is not surprising that, in the wake of a new women’s movement, care work and feminized labor is at the center of class struggle. Women are at the forefront of the labor movement’s renewal. Let’s follow their lead.