On Saturday, nurses voted overwhelmingly in favor of repealing Section 210 of the Taylor Law and fighting for public workers’ right to strike. 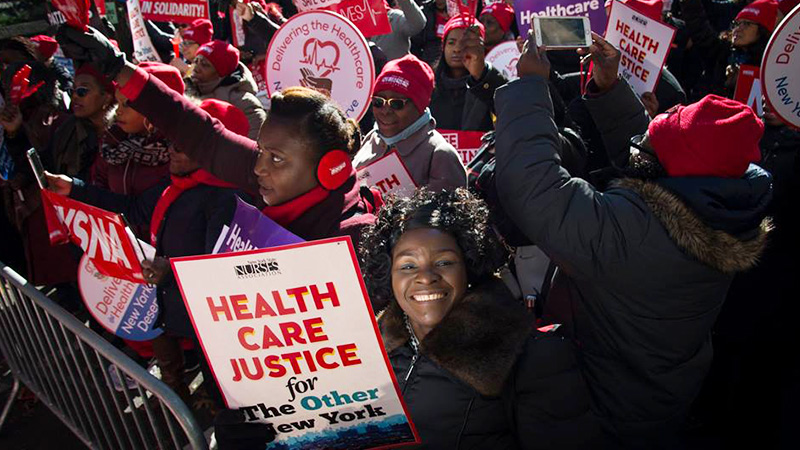 The historic vote took place at the New York State Nurses Association’s annual Convention, the highest decision-making body of the 42,000 member union. The resolution, “All public sector nurses, along with other public sector employees should have the legal right to strike,” states that “NYSNA will fight for public sector nurses to gain the legal right to strike… and work with other unions and organizations to this end” (full text of resolution below). This marks a momentous shift for a key sector of workers, and possibilities for a labor movement that has long suffered brutal attacks by employers and the state.

When nurses raised the discussion at their first delegates’ assembly, a lively debate took place among elected rank-and-file leaders. A nurse from Harlem Hospital asked, “Is NYSNA a union that fights for universally recognized fundamental rights? Are we that union?” She went on to say, “As it stands, because of Section 210 of the Taylor Law, public sector nurses do not have this fundamental right, the most valuable tool at our disposal to fight for a fair contract, and to fight for healthcare justice for our patients.”

While a handful made opposing arguments, many who work in the public and private sector spoke in support of the measure. A nurse from Bellevue Hospital stated, “If the private sector has the right to strike, why don’t we? Bloomberg made it clear, we didn’t have any teeth. He dragged his feet for years and years and wouldn’t give us a contract.” A nurse from Mount Sinai Hospital said, “Instead of waiting for management to come to the table, we need to force them to the table.”

In New York, it is illegal for public employees to strike. The Taylor Law (1967) enacted heavy penalties and even the threat of incarceration in the event of a strike authorized by public sector unions. It has served as the single-most effective obstacle to the public sector’s ability to fight. It has prohibited school teachers, nurses, transit workers, firefighters, sanitation workers, and clerical workers from utilizing strike action to improve working conditions, increase wages, and stop hospital and school closures. By effectively tying workers’ hands behind their backs, they have been forced to abandon their most powerful weapon to win their demands. As a nurse from Erie Medical Center succinctly put it, “Without this option, when we go into contract negotiations, we go to a gunfight with a knife.”

Governor Cuomo has come out against public sector workers’ right to strike. In an August 29 debate with Cynthia Nixon, he said it was a “terrible idea” to end the no-strike clause. He continued, “If you allow the public sector unions to strike, teachers could go on strike. There would be no school, children wouldn’t be educated.”

Across the country, working class people have faced a steady onslaught of budget cuts, increasing costs, and privatization of public assets and programs. For nurses and not-wealthy patients, the effects have been devastating. Global capitalist trends, lean management, increasing competition and profitability in the healthcare industry have put a squeeze on nurses in both the private and public sector.

Some public employees, like teachers and nurses, are particularly exposed to inequalities and the social costs of capitalism in classrooms and patient care settings; they are sometimes the first line of defense for the public good; they often advocate for public health, education, transportation, housing, and the environment. What, then, are the consequences of criminalizing their strike action? When they are debilitated by anti-worker and no-strike laws, their capacity to fight for the public good is also greatly weakened. In short, we’re all in trouble.

In large part, labor officials have peacefully co-existed with this damning legislation. Union officials have often justified their quiescence in the context of labor’s declining power and numbers with the idea that “negotiating in good faith” and “working relationships” with management lead to better outcomes. Some have echoed managements’ warnings that strikes are too risky, “naive” and will only turn the public against them. Instead, workers’ potentially explosive power is channelled into non-confrontational, accommodating, electoral and lobbying strategies.

Recent contract negotiations in New York City quickly illustrate the effects of the Taylor Law’s no-strike clause. Upwards of 8,000 nurses waited for more than six years by the time New York City public hospitals (H+H) agreed to sign a contract with NYSNA in 2016. In 2014, the United Federation of Teachers (UFT) brought their five-year negotiations to an end with an agreement that included two years of zero wage increases. The same story goes for the employees of the City University of New York (CUNY) organized by the Professional Staff Congress (PSC).

NYSNA now stands on record in favor of all workers’ right to strike. While just a beginning, New York nurses’ vote for the union to fight the Taylor Law’s no-strike term signals an important opening for renewed discussion and building power within the public sector. Now is the time for labor activists across New York and beyond to take up this important fight. About time.

Whereas, NYSNA is committed to protecting and improving the working conditions and economic security of all nurses and all working people

Whereas, the right to strike is a powerful tool for improving the healing conditions of patients.

Whereas, historically, strikes and other workplace actions led to the recognition of basic rights such as collective bargaining, the end to child labor, limits to the working day, occupational safety, ending dictatorships, and the establishment of social security and unemployment.

Whereas, in Spring 2018, teachers’ strikes in public schools across West Virginia, Arizona, Colorado, and elsewhere successfully gained increased wages and healthcare benefits, and in some cases led to the expansion of funding for public education.

Whereas, historically, nurses have successfully used strikes and the threat of strikes to gain substantial wins in numerous campaigns.

Whereas, the State of New York has outlawed all public sector workers, including nurses, from utilizing this valuable tool through the passage of the Taylor Law in 1967.

Therefore, be it resolved that NYSNA will fight for public sector nurses to gain the legal right to strike by making the repeal of Section 210 a legislative priority, releasing a public position statement, and work with other unions and organizations to this end.

Also, be it resolved that NYSNA will conduct membership education on the right to strike in the United States, how it was won, its history as a fundamental democratic right, the role it has played in building the labor movement, as well as the history of the Taylor Law in New York State.

Also, be it resolved that we will work with legislators and other public sector unions to draft legislation that provides a right to strike without giving up any of our existing legal protections.