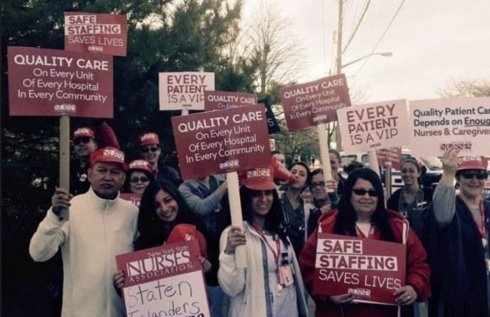 The NYSNA reached a tentative agreement with the Hospital Alliance following months of negotiations. The settlement, still under review, will bring into effect a four-year contract beginning January 1, 2015. Its terms include a 13.1% compounded wage increase on base rates, selective staff additions of up to 4%, float pools to cover sick calls, and protections against workplace discrimination. Notably absent in the contract’s language are any terms for the central demand of fixed nurse-patient ratios that would ensure a minimum level of staffing corresponding to the acuity and standard of care for each unit.

The NYSNA represents 18,000 New York City nurses in private and public hospitals, with a total of 37,000 members throughout the state. Since the beginning of the year, the union has been entangled in contract negotiations with fourteen different New York City hospitals. While management teams have been quick to offer nominal wage increases, they have rigidly refused giving in to the primary demand for fixed staffing ratios.

Persistently inadequate staff or “short staffing” is a core element of the hospital system and management logic that structures the daily, intense exploitation of healthcare workers. It ensures a more frenzied work pace, the alienating prioritization of tasks, and the degradation of care. It has been linked to a higher rate of medical errors and complications, lower-quality care, and negative clinical outcomes. This issue has formed a battleground between nurses and hospital executives throughout the United States and internationally, as demonstrated by the ongoing nurses’ strike in Germany’s largest hospital, Charité clinic .

Labor unions up and down the east coast are attempting to bring this issue up in contract negotiations. At the bargaining table, nurse unions are not winning staffing ratios, but instead settling on contracts that maintain the status quo or provide nurses with limited financial benefits. More and more, unions are directing their attention and resources to the electoral-political arena, lobbying for city and state legislation to regulate staffing. Legislative campaigns are slow going and often contribute to the fragmented terrain of divisions and resentment between workers of different occupations and skills (ie: nurses and techs).

Since the beginning of the year, thousands of frustrated New York City nurses have participated in pickets and outreach campaigns to gain leverage for contract negotiations. Many have spoken out at the job against unsustainable workloads. In response, hospitals have retaliated by dragging nurses off the unit and threatening to fire them for speaking up.

On June 3, the NYSNA union membership authorized a city-wide strike with a sweeping 95% vote. During the announcement of the strike authorization, NYSNA President Judy Sheridan-Gonzalez emphasized the dire circumstances for nurses and the complete lack of cooperation from hospital management: “We are confronting an unconscionable effort by management to stifle us, to silence us and to prevent us from fulfilling our role as patient advocates.” However, that same day, union leaders re-entered negotiation with the Hospital Alliance and underwent three days of talks with management, ending in a stalemate. Several days later, the union gave it “one more try” — another three days. Finally, union representatives walked away with a conciliatory agreement, saying they were “pleased” with the settlement, “achieved after months of hard negotiations.” The agreement effectively curtailed the strike action of tens of thousands of healthcare workers.

While the four aforementioned medical centers have temporarily retired from the bargaining table, ten New York City hospitals still remain in negotiations, with many more throughout the state. Workers are voting time and again to strike. It remains to be seen whether or not mediocre concessions by hospital managements will spur action or submission on the part of union leadership. For now, it seems the latter is more likely. There is a clear disconnect between the rank-and-file’s readiness to strike and the union leadership’s trepidation to act, to the point of stalling or ignoring the membership’s mandates. This hesitancy, of course, is not reflected in the NYSNA’s rhetoric. In a message to the union membership, Sheridan-Gonzalez enthuses, “Many of us are nervous, even scared, to take the steps we are taking to fight for healthcare justice  —  even if it means voting to authorize a strike.”

In the meantime, healthcare workers by the thousands are pushing for bolder action. Since the tentative agreement with the Hospital Alliance, NYSNA nurses at two staten island hospitals declared their intent strike in the absence of a satisfactory agreement. Outside Albany, last Friday, over 700 nurses at Ellis Hospital in Schenectady and Nathan Littauer Hospital in Gloversville voted to strike . Contrary to the idea of docile, fearful masses underlying Gonzalez’s statement, conditions have reached a point that healthcare workers — frustrated, desperate, burnt out — are showing a willingness to fight.