A protester spent 24 hours at the City Hall Encampment, demanding that New York City defund the NYPD. This is the firsthand account of his experience. 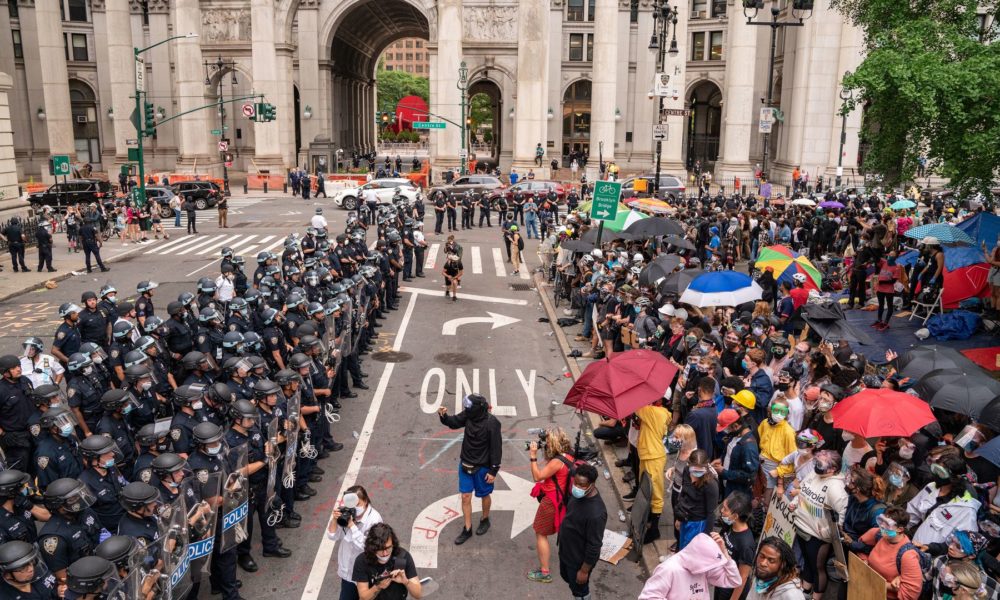 It wasn’t just a protest I found myself approaching on Tuesday afternoon: it was a community. The sun blazed over thousands of people who had claimed space outside New York City Hall to demand a budget to significantly defund the NYPD. Art was everywhere, and volunteers handed out rice and lentils. Music played. People sat in groups talking politics.

The space had been taken by VOCAL New York a week before I arrived. VOCAL’s presence was certainly a driving force, but as became clear over the past week of round-the-clock occupation, this was a much larger, more collaborative project than most Americans are probably used to seeing. Black Lives Matter Greater NY, Warriors in the Garden, NJ Street Medics, and Left Voice were just a few of the many groups I would meet participating at the camp.

Half an hour in I found myself at a brainstorming session to create demands for abolition. The demands discussed were written on cardboard and posted in the camp, and served as the starting point for breakout discussion groups which were made up of seemingly equal parts veteran protesters and people who openly admitted that they were new to political action. It was about two hours before the discussion came to an end.

I interviewed Jonathan Lykes, one of the original organizers of the protest and cofounder of Black Youth Project 100. This is the only interview I recorded throughout my stay, though not for a lack of effort. People at the camp were hesitant to speak with me, and given the behavior of some media people covering the event, it came as no shock. Throughout my time at the camp, many reporters ignored the press intake booth and photographers took pictures without people’s consent, despite the fact that doxxing has been known to endanger participants of abolition protests throughout the country.

“We know that people are trying to get quick stories and a lot of media is run by corporations,” Lykes told me. “So I think the more in depth they go, the more time they spend asking questions, the more energy they put into the process, the better the product will be.”

This was powerful for me to hear as I’ve often found myself in media spaces where I’m the only person advocating for the press to show solidarity with movements for freedom. I believe if there was any lingering conditioning within me from the years of journalism mentors telling me to always be neutral, it went away thanks to Lykes’ words on the matter.

Less than an hour later, I was rushing to set up tarps as a heavy downpour began. Everyone rushed around handing out umbrellas and ponchos and making sure supplies were kept dry.

As I huddled with dozens of people under a tarp, a houseless woman cried, telling the numerous people offering her blankets and keeping her bags from the rain that “You’re the kindest people I’ve ever met.” Chants such as “Who keeps us safe? We keep us safe!” and “This is what community looks like,” started to lift the camp’s spirits. The rain ceased and almost immediately, and the music, art, and organizing began again.

A few hours later I was helping with an art project. A large yellow banner was rolled out and people were painting the names of Black Americans who have been killed by police. I was told that it will be as long as a football field when finished.

Part way through the project, people started screaming to barricade the camp gateway at the South end as police in riot gear approached. Protesters rushed up to the metal gate to keep it secure, and volunteer medics rushed to the front. De-escalators kept people from falling prey to police antagonization. After a bit, the police fell back and protesters cheered.

The following hours of the night were festive. Music was everywhere, including live performances. It was impossible to look in any direction without being bombarded by all the colors of street art throughout the camp. The conversations I either heard in passing or found myself directly participating in ranged from historical examples of direct action, how the arts can be used to support abolition, why police are irrelevant, what economic theorists people most liked reading, and how people were working to pressure City Council members into approving the demanded $1 billion divestment from the NYPD.

The arts and discourse and general peace of the night was the norm, but occasionally it was interrupted by calls for bodies whenever more police would mobilize around the camp. At 12:36 a.m. and 2:43 a.m., the riot police presence was especially bad, though the camp was well barricaded. It was nothing short of inspiring to see how many people were ready to put their bodies on the line and link arms to defend the camp.

Of course, the NYPD is a brutal force. Though the two major mobilizations in the night were easily fended off, the NYPD attacked at 5 a.m. and didn’t hold back. Pepper spray, bludgeoning, grabbing at hair, knocking down umbrellas which had been used to cover surveillance cameras, and plenty of other brutal tactics were used to break the lines of protesters. It would probably be impossible to recount the experience accurately, but fortunately I don’t need to. There are countless videos of the attack, including one I took.

Following the attack, barricades were trashed and a protester was arrested and denied medical treatment. An anchor from News 12 came to the camp later that day and falsely reported that the arrested protester had assaulted a police officer. I spent much of the morning concerned that with the city budget deadline approaching that very night and barricades destroyed, the camp might not have the numbers to fend off another brutal attack. As I write this, it’s just after midnight on June 30 and I’m hearing from people still occupying that the camp has the biggest turnout it’s had to date.

I’ve long argued that at their core, people are good. I think for the longest time I argued this because I had to believe it in order to stay sane. After experiencing Occupy City Hall, I truly believe it. Of course the camp wasn’t some utopia. There were disputes, and there were some participants that disrespected women or LGBTQ+ protesters. But whenever there was a serious threat to the camp and people’s instincts kicked in, the instinct wasn’t to run. The instinct wasn’t to sacrifice one another. The instinct was for everyone to put aside their differences, bring out their courage, and look out for their neighbors. I don’t believe this instinctive solidarity was just a rare occurrence. I believe it’s what happens when humans finally rid themselves of the forces that divide us, such as policing and hunger.

The Occupied City Hall, though not free of occasional infighting, is an act of solidarity that all progressives should look to as an example of how to create a better world. I witnessed a library full of abolitionist and anti-capitalist literature and a food booth that never seemed to run low on donations. I was inspired by Black organizers who kept the spirits of the camp optimistic and the direct action constant and coordinated and I was inspired by the people who admitted they had never protestested a day in their life but rushed to the front of the line when police began to storm the area. I heard members of the LGBTQ+ community say that they had never felt so safe within a crowd of people and I heard stories of people leaving their belongings unattended for hours on end just to come back and find everything safely where it had been left.

The budget demanded by the protesters was not approved. The victory we spent over a week fighting for didn’t come, and that’s not something to take lightly. But a victory did come. For more than a week, New Yorkers created a clear example of what a world without police would look like. When women were harassed, the camp overwhelmingly supported the removal of abusers. If people’s valuables went missing, it was typically because they were at the lost and found. When someone started being disruptive or tried to start fights, trained members of the camp were there to settle the person down, no guns or badges needed. Every hour I spent there proved that it’s far easier to maintain peace through empathy and accommodation rather than through incarceration and violence. It was beautiful. Thousands of people will take that with them as they continue fighting to create that world for good.