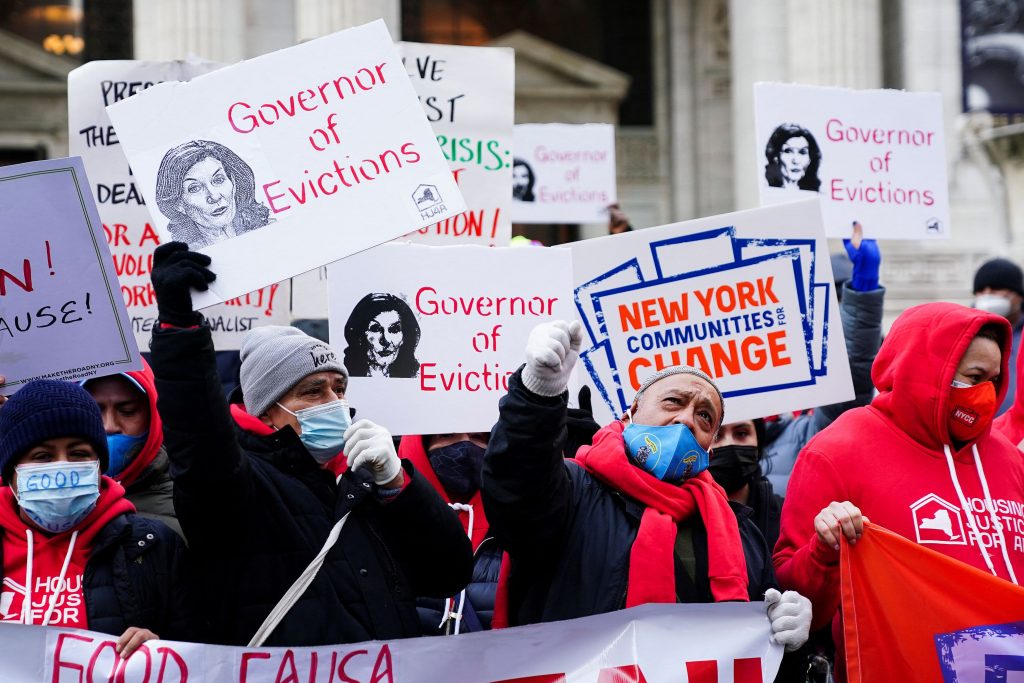 New York’s pandemic eviction moratorium expires today; it began in March 2020 when then-governor Andrew Cuomo ordered a temporary ban on eviction proceedings in response to eviction protests and calls for action to protect tenants. Hundreds of thousands of households across the state owe back rent and now face eviction. Forty-one percent of these households include children, and 72 percent of the affected renters are people of color. According to the Eviction Lab at Princeton University, there have been 81,530 eviction filings in New York City alone since March 2020. Many are now set to proceed amidst a new Covid surge and sub-freezing temperatures.

After Cuomo’s executive order, the Covid-19 Emergency Eviction and Foreclosure Prevention Act was enacted in December 2020, putting a temporary stay on eviction proceedings if tenants filed a form demonstrating they had suffered pandemic-related financial hardship. It was originally set to expire in May 2021, and was extended twice — once through September and again through January 15, 2022.

The state government has shown little willingness to deal with this impending human catastrophe. The legislature went on break last Wednesday without extending the moratorium. Last week, New York governor Kathy Hochul gave her first State of the State address and put forth a plan — with nothing guaranteed — to build 100,000 “affordable” housing units over the next five years, which wouldn’t even house all the people at risk of eviction today.

Instead of taking decisive action, Hochul signaled to renters that they should use the state’s Emergency Rental Assistance Program (ERAP), a state program launched last year, that was ended due to lack of funds, and that is once again accepting applications with no guarantee that any actual help will be forthcoming. On Thursday, New York City mayor Eric Adams called for an infusion of emergency funds for the program from the U.S. Treasury Department, but whether this money will be granted is uncertain. For now, an ERAP application will do little more than buy renters some time, as landlords are forbidden to proceed with evictions while applications are pending.

Putting human beings in this horrific housing limbo is the unconscionable “solution” offered by the NYC mayor and New York governor.

The moratorium expires just as the capitalists are pushing to “return to normal” at all costs. When it comes to homelessness, that means returning to the indefensible crisis that existed long before the pandemic.

But it’s not the crisis the mainstream media talks about. The truth is that there is no housing crisis in the United States; there is a crisis of capitalist hoarding of empty homes. There are more than enough houses and apartments to accommodate the country’s population. In fact, the United States has 59 empty homes for each unhoused person. One in 10 Manhattan rental apartments sits entirely vacant, while nearly 2,400 people sleep on the street each night. The city spent $3.5 billion on homelessness in 2020 — that’s $58,000 for every unhoused person in New York City, enough to pay each person’s rent and then some.

Protestors have gathered this week across the state to demand relief for struggling families. In the video below, tenant activists outside of the Brooklyn Housing Court burn their eviction notices and shout, “No evictions: not today, not ever.”

Their demands include extending the moratorium; keeping the Emergency Rental Assistance Program open until the state gets the money needed to pay off all debts; expanding New York State Right to Counsel; and passing a Good Cause Eviction Law, which would prevent no-fault evictions that allow landlords to throw out tenants without a “valid reason”; establish the right to automatic lease renewal in most cases; and preventing steep rent hikes. Tenant rights groups are working hard to spread the word about renters’ rights and urging tenants not to leave their homes before exhausting all their options.

Housing is a right, but it is not one guaranteed by the capitalist state. Throwing people out of their homes is tantamount to murder, as Friedrich Engels wrote in his 1845 book The Condition of the Working Class in England.  As he explained:

When one individual inflicts bodily injury upon another such that death results, we call the deed manslaughter; when the assailant knew in advance that the injury would be fatal, we call his deed murder. But when society places hundreds of proletarians in such a position that they inevitably meet a too early and an unnatural death, one which is quite as much a death by violence as that by the sword or bullet; when it deprives thousands of the necessaries of life, places them under conditions in which they cannot live – forces them, through the strong arm of the law, to remain in such conditions until that death ensues which is the inevitable consequence – knows that these thousands of victims must perish, and yet permits these conditions to remain, its deed is murder just as surely as the deed of the single individual; disguised, malicious murder, murder against which none can defend himself, which does not seem what it is, because no man sees the murderer, because the death of the victim seems a natural one, since the offence is more one of omission than of commission. But murder it remains.

While temporary solutions such as moratoriums and government financial assistance are necessary to save lives and preserve at least some dignity for the hundreds of thousands of precarious renters who are  awaiting relief, our fullest demands must not stop there. We must mobilize to protect people from eviction, and demand total rent forgiveness and free public housing for all.