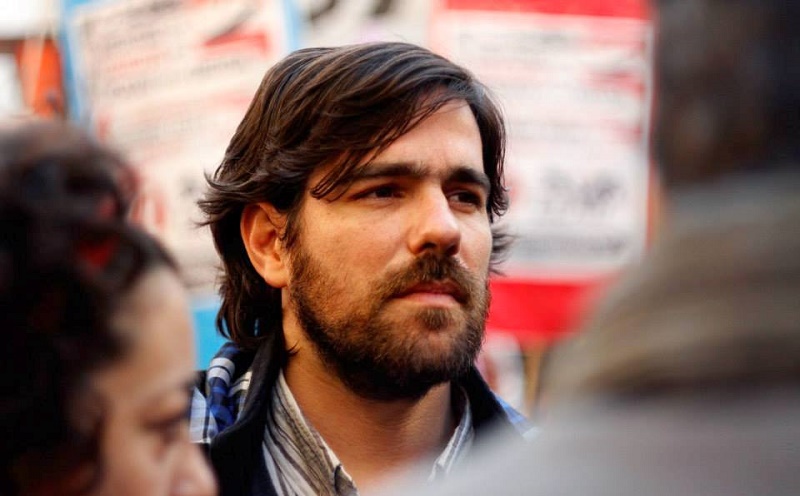 “In the words that follow, I will explain why I have rejected your invitation to a meeting that supposedly seeks “consensus.” From our point of view, the political objective of these meetings is to present a new government that is “open to dialogue,” when you are actually preparing a brutal austerity plan against the workers—and you are willing do it by decree.”

“Devaluation, an increase in electricity and gas fees, an agreement with the “vulture funds,” a new external debt cycle; this is what his government already announced and will carry out without even calling a debate in congress…These measures will mean a tough low down in the real salary and new resources for the financial speculators.
When the sessions at the congress start in March, we will be going through the consequences of this economic cut. The reasons for not attending this meeting was not about principles, it was the result of a political diagnosis. We will not validate a manoeuvre that can only legitimate the absent of a debate at the congress, where the Left and the Workers’ Front (FIT) represents those who voted us.”

“This lack of parliamentary sessions is not much about making sure they have the majority at the congress, it is actually about the possibility that public debate would become a scenery of strong mobilizations of the workers and the people.”

“If you really care about debate, you would have taken the compromise of not making any decision through DNU (NUD – Necessary and Urgent Decree). The Left and the Workers’ Front (FIT) have several projects to avoid the workers paying for the crisis: minimum wage equal to the cost of living; salaries have to increase according to the monthly inflation rate; prohibition of layoffs and dismissals for 24 months; ending of all ways of precarious labour; special end-of-the-year bonus in order to compensate the huge inflation during the last month; eliminating the workers’ salary tax; 82% for all the retired.”

“We have also submitted an emergency bill against gender violence and we are part of the National Campaign for the Abortion right, because we want to finish with the death of more than 300 women, which die annually due to the abortion illegality. Those are the emergency projects to defend the workers and the women’s rights and to be supported by everyone that is willing to do so.”

“The truth is that the new government and the FIT express two antagonistic political visions; they belong to different and opposed social interests. Your cabinet is full of managers, bosses and ex-bosses (most of them from multinational companies) and businessmen who represent the interests of the “country’s owners” and the economy power. My comrades have been confronting them at their workplaces.”

“Lan Airlines CEO Gustavo Lopetegui was appointed chief secretary of the cabinet. He was the responsible for the persecution suffered by APA trade union delegates.
General Motors CEO Isela Constantini, appointed manager of Aerolíneas Argentinas, has a history of violating every kind of union right while at the head of the multinational company. Susana Malcorra, External Affairs secretary, former CEO of Telecom telephone Company after ENTEL was privatized (the telephone company belonged to the State previously), used to threatened workers with layoffs if they didn’t accept a cut in their wages. Juan José Aranguren, Shell CEO, dismissed several workers without justified cause due to their left political activism and because they had demanded their labor and union rights…”

“Secretary of Agriculture is a representative of the Agro-businesses, a strong supporter of the “soy model” and the practices of those employ 75% of their workers with a complete lack of rights…In Buenos Aires province, Macri named a Monsanto manager – a corporation that has received heavy accusations for its crimes against the area’s population for its use of toxic agrochemicals.”

“Your Economy cabinet is full of with former bosses from the International credit banks and organizations such as Alfonso Prat Gay, already a member of JP Morgan, and Luis Caputo from Deutsche Bank. These banks had obtained extremely high rates of return, which can only be compared with off-shore tax havens; they were also responsible for the illegal flight of capitals such as the HSBC case showed.”

“… This cabinet composed by “technicians” is actually a capitalists war cabinet against the workers, in service of a tough policy for the crisis to be payed by the workers through the devaluation, riseup on the fees, deduction of with-holdings for the agro-bosses, paying the vulture funds and a new cycle of external debt. A policy that was promoted by the bosses and that Daniel Scioli (FPV, Kirchnerist candidate), was also willing to apply, asi we denounced during the elections campaign.”

“…the economic clusters that carried out the genocide during the last dictatorship in Argentina, where the main companies held concentration camps at their workplaces, in which workers were tortured and then disappeared. Let me remind you that at the congress, the PRO (Macri’s political coalition) was the only one that opposed to the making of a two-chamber committee to investigate the crimes from the economic power during the dictatorship.

“Part of that economy power are the big landowners. Only four (4,000) thousands are owners of half of the lands that are used in our country for .agriculture and livestock farming. Many of them owned those lands after the indigenous’ peoples genocide. Today they keep on lining their pockets associated with Monsanto and the big export companies; using a high level of agro-toxic that affect rural communities.The “soya model” keeps on spreading through the agriculture family lands, as it is happening in several provinces”…. “And you award this big land owners with 84 thousand millón (Arg. Pesos) that the State will stop rising as withholding concept”.

“The same as the FPV (Frente para la Victoria – Victory Front / Kirchnerist coalition), you also support the polluting open-pit mining that leads to disasters such as the one in Jáchal caused by Barrick Gold. On the other hand, the persistence of the privatization system on energy and gas, with its origins the 90’s and then the kirchnerism kept. Instead of nationalizing those resources under workers’ control, they are willing to increase the profits of those companies with high fees that the people will have to pay.”

“The truth is, despite your discourse, the left and the right still exist. The Left and the Workers’ Front (FIT) express the workers’ and the oppressed interests and we fight for our own demands in the Congress, but most of all with the strength of mobilization in the streets, which is the only way to achieve them. Your government, that belong to the big bosses, although you hide your real identity, introducing your government as one of “technicians and administrators”, you are actually the “the country owners”. Different from ourselves, you don’t want to call them by their real name.”