Yesterday the Supreme Court heard arguments in Dobbs v. Jackson Women’s Health. It is clear that the right to an abortion is in danger and the Supreme Court is poised to overturn Roe v. Wade. We need a mass movement to fight back and we are running out of time 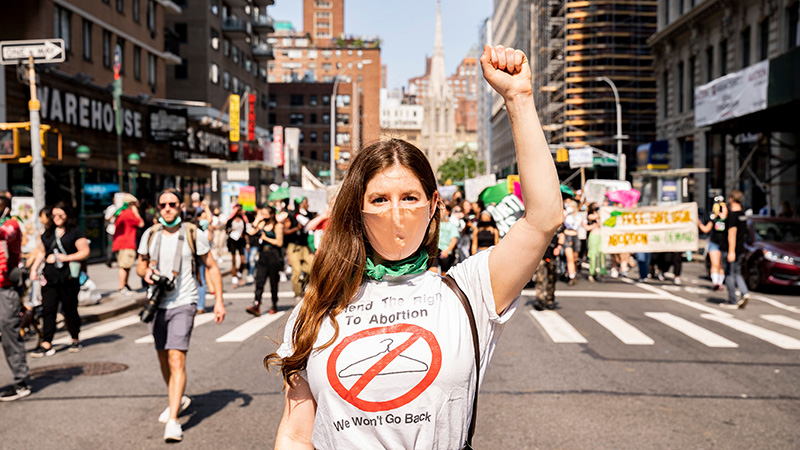 Yesterday, the Supreme Court heard testimony in  Dobbs v. Jackson Women’s Health, a case litigating a Mississippi law that bans abortions 15 weeks after the beginning of a person’s last menstruation. The law presents an explicit challenge to an earlier Supreme Court decision (Planned Parenthood v. Casey) made by the court in 1992, which states that abortions cannot be banned before fetal viability.

But this is about even more than questioning the Casey decision.

From the very start of opening arguments, the counsel for the state of Mississippi made it clear that this case is meant to overturn Roe v. Wade. “Roe and Casey have failed, but the people, if given the chance, will succeed. The court should overrule Roe and Casey and uphold the state’s law,” he argued.

But “the people” have nothing to do with it. In fact, only 27% of Americans want Roe v. Wade to be overturned. The movement to ban abortion is a movement of the most reactionary sectors of the right — specifically the evangelical right — to undemocratically use the courts to overturn important advances in reproductive freedoms.

Now the legality of abortion is going to be deciced by nine unelected Supreme Court justices. And based on their responses in the courtroom yesterday, it is looking increasingly likely that Roe v. Wade will be overturned. This comes after decades of the basic right to an abortion being eroded at the state level and the national level. Now Roe is set to receive a death blow.

There are three possible outcomes of this case.

The line of questioning in the courtroom was outrageously right wing. Amy Coney Barrett, Trump’s notorious right-wing appointee, actually said, “it doesn’t seem to me to follow that pregnancy and then parenthood are all part of the same burden, and so… the choice…would be between…the ability to get an abortion at 23 weeks, or the state requiring the woman to go 15, 16 weeks more, and then terminate parental rights at the conclusion.”

In other words, you can have your parental rights terminated, so what’s the big deal here? Nine months carrying around a fetus you don’t want? Forcing childbirth on someone? No big deal! Mind you that childbirth is actually more dangerous than an abortion — this is especially true in states like Mississippi thathave a crumbling health care system and shockingly high infant mortality rates, but the pro-lifers aren’t worried about that.

While lawyers for the state argued that this was about the right to life, we know that’s a lie. States like Mississippi and Texas have been on the front lines of cutting off any federal support for low income people, including children. This overwhelmingly affects poor and working class people, and people of color disproportionately.

Laurie Bertram Roberts, an activist for abortion rights, explains, “It’s very easy to shame Black women and Black motherhood…It’s one of Mississippi lawmakers’ favorite things to do, especially on the right. If they’re not attacking Black women for having abortions, they’re attacking us for using SNAP benefits or TANF.”

The lawyer defending Jackson Women’s Health (and the right to an abortion) leaned quite a bit on precedent in order to make their point, arguing that the case had already effectively been decided in Roe v. Wade and Planned Parenthood v. Casey, so there was no reason to revisit it.

Samuel Alito compared Roe v. Wade to Plessy v. Ferguson, the case that upheld segregation in 1896. He said that if Plessy were re-argued later, the court should backtrack on this  “egregiously wrong decision.” Others claimed that decisions like Brown v. Board of Education didn’t adhere to precedent and if it had not been decided, “the country would be a different place.”

But it seems that this Supreme Court is poised to deal abortion a death blow.

Nine unelected people who serve for life have, from their mansions and beautiful Washington, D.C. offices, the ability to make decisions about the health and bodies of people all over the country. They have the ability to force people into birthing children, taking away the most basic right of bodily autonomy. Of these nine, two are known sexual harassers and sexual assaulters.

These are the people who will take away abortion rights. And this will not affect all people equally. Wealthier people will have no problem at all traveling to another state for an abortion. But low income people will have to face tremendous obstacles to get an abortion, have unsafe abortions, or be forced to carry an unwanted fetus to term.

The Graveyard of Social Movements

And as our rights are being stripped away, the streets are essentially empty; there is almost no protest.

When socialists say that the Democratic Party is the graveyard of social movements, this is what we mean. It means that a basic right is being eroded and the streets are empty. The Women’s March, with it’s national reach, did not organize a national day of mobilization yesterday or when the Texas ban on abortions was upheld in September. This is because the “feminist” and “women’s rights” non-profits that are aligned with the Democratic Party don’t want big protests in the Biden era. After all, that could make Biden’s poll numbers fall even further.

The Democrats are all tweeting against the possibility of Roe v. Wade being overturned, but tweeting is not fighting.

And yet they have the audacity to say that we should vote to save abortion rights, as if the Democrats don’t currently  control the Presidency and Congress. Without a doubt, the Democrats will use this Supreme Court decision to scare people into voting for them in the midterms — vote Democrat if you want our state to maintain abortion rights. This hides the fact that Democrats have had decades to pass legislation protecting aborton rights at the state and federal level. And they haven’t done it. They have just trotted out abortion every two years in an attempt to get votes.

And further, they welcome anti-abortion Democrats into the party and even played an integral role in passing the Hyde Amendment, which limits the ability of low income people to get abortions. The Democrats don’t stand for abortion rights, and believing that they do is a dangerous, de-mobilizing, and disorganizing illusion.

We Need a Movement Now

One thing that is clear is that although the Supreme Court seems poised to take this dramatic step to take away abortion rights, they are also worried about the effect that might have on their legitimacy. Sonia Sotomayor asked Mississippi’s solicitor general whether the institution of the Supreme Court would “survive the stench” of overturning Roe, as it would make clear that the Supreme Court is a political and partisan institution. Even Amy Coney Barrett seemed worried about this a few months ago, saying, “My goal today is to convince you that this court is not comprised of a bunch of partisan hacks.”

And the possible overturning of Roe v. Wade will only further prove the undemocratic nature of the court. Only 26% of the population believes that Roe should be overturned, and yet, nine unelected people are about to do that.

People should be infuriated, disgusted and angry about this.