Nissan uses race baiting and threats to try to stop workers from unionizing. 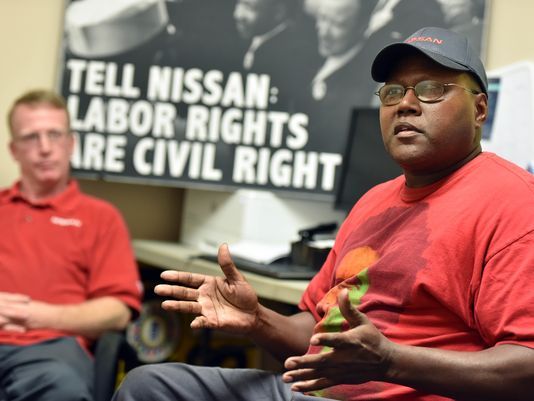 Nissan workers are in a cutthroat fight for unionization in the area of the South with the lowest rates of unionization. 3,500 workers will be voting on Friday and Saturday on whether to join the United Autombile Workers. The New York Times reports that “Union supporters complain that the company has been stingy with benefits and bonuses, that workers on the production line are pressured to sacrifice safety to keep the line moving briskly, and that supervisors arbitrarily change policies about discipline and attendance.”

The drive for unionization has created deep divisions fostered by the company and the government. Nissan invested in anti-union TV ads, as well as being accused of bullying and bribing workers to vote against the union. The company also required workers to attend anti-union meetings and engage in one on one meetings with supervisors who don “Vote No” t-shirts.

Republican governor, Phil Bryant said,“If you want to take away your job, if you want to end manufacturing as we know it in Mississippi, just start expanding unions.” The fear of job loss is prevalent among workers, many who only have a high school education and are afraid that without a job at Nissan, they would be forced to work minimum wage jobs.

Unsurprisingly, the company is using racism to divide the workers and squash the union.The majority of the Nissan workers are Black, and white supervisors in line with the bosses have rewarded white workers with more comfortable assignments in the plant in efforts to divide the workforce.

Posters such as the one below have cropped up, encouraging white workers to align with racism and against unionization. The Sons of Confederate Veterans use swastikas and a call for an end to “cultural genocide”– a “dog whistle” term used to assert that it is in the interests of white workers to stay attached to racism rather than to unite with the Black workers at the plant. 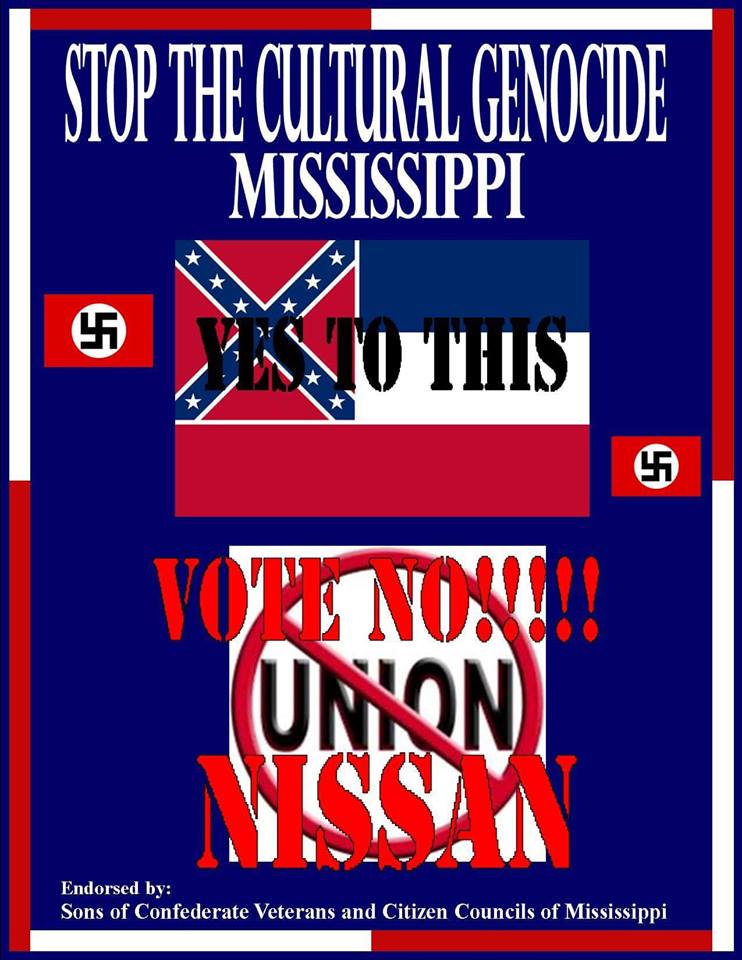 Management is using repression against all workers in order to dissuade them from voting yes for the union. Furthermore, they are using racism and offering crumbs to white workers in the form of additional privileges both tangible and social in an attempt to make them feel alignment with the bosses. This is an age-old trick used to break strikes and keep workers’ wages low. Although some white workers have gained privileges by breaking ranks with their fellow workers, ultimately the workers’ overall wages are kept low, and they are subjected to harassment and intimidation. Right wing organizations such as the Klan have always opposed workers’ organization especially in the South where they have historically murdered white and Black organizers who attempted to unionize and integrate. The posters being used by Nissan management attempt to reharness the racist and violent history of the Klan and the Nazis.

Conversely, Black workers have high rates of unionization and have fought through unions for racial equality as well as higher wages. Black workers are also more likely than any other ethniticy to belong to unions. Successful battles for unionization, the largest being the creation of the Congress of International Organizations (CIO), were forged by the combined methods of unionizing all workers, skilled or unskilled, and organizing Black, white, Asian and Latino workers together in a rejection of racism.

What is at play here is a class struggle against the bosses and the bigots. This is a fight for the rights of workers of all ethnicities to better wages and legal rights. We as socialists, unionists, and activists support the Nissan workers’ struggle and condemn the racist divisive tactics of the racist bosses at Nissan. When workers of all ethnicities unite as one to join a union, the results are better wages, better living conditions, and the power to fight back against the bosses who exploit them.