No, Cuomo Is NOT the Leader We Need. He’s Been Bleeding Us Dry for Years.

Andrew Cuomo has developed a cult following across the country, with many lauding him as the strong leader working people need. In reality, New York’s governor rules on behalf of the wealthy and continuously sacrifices working people. He won’t do what is necessary to address the crisis and save working people’s lives. 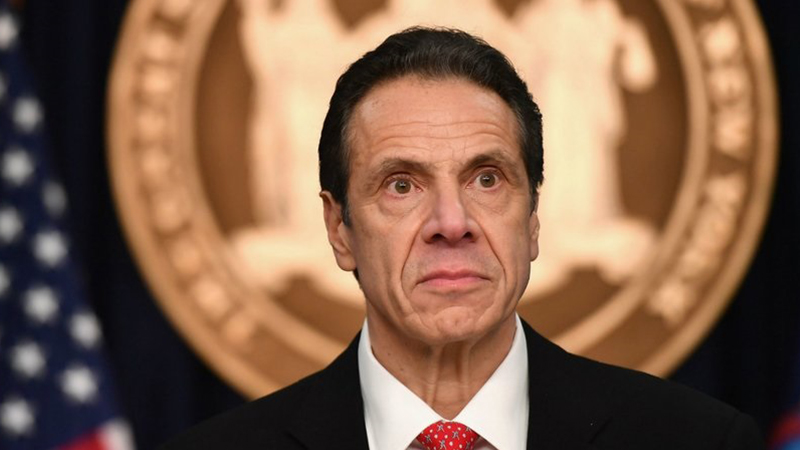 It seems like only yesterday that Andrew Cuomo was a run-of-the-mill centrist Democrat: heavy-handed, corrupt, but still rhetorically progressive, the type of politician who could cut services behind your back while taking credit for marriage equality and a higher minimum wage. But seemingly overnight, Cuomo has been catapulted into national prominence as the “leader we need” for the coronavirus emergency. And to be fair, compared to Trump’s criminal inaction and denialism in the face of the pandemic, Cuomo comes off as amazingly competent, concerned, and honest. But despite his sometimes amusing family bickering and his desperate pleas for the president to use the Defense Production Act to secure badly needed ventilators, Andrew Cuomo is no friend of working people, and never has been.

As anxiety spreads, millions of working people have tuned in to Cuomo’s daily press briefings, with #presidentcuomo trending on twitter. The odd cult of personality was captured well by Rebecca Fishbein, writing in Jezebel,  “Help, I think I’m in love with Andrew Cuomo?” But as Jacobin was quick to point out, even in this crisis, Cuomo is not our friend. Indeed, Cuomo has been a lifelong champion of the rich and powerful, and has consistently attacked the working class time and again. Is it any coincidence that New York has remained the single most unequal state in the U.S.?

Throughout his tenure, Cuomo has consistently worked to guarantee the profits of New York’s billionaires and super rich, whether it be real estate speculators, Wall Street tycoons, private hospitals, or massive construction firms — to take only a few examples. Sean Petty, a registered nurse and activist, put it well on Democracy Now: “I would call Governor Cuomo probably the single most important person in terms of the drive to close down hospital beds in this state over the last 20 years.” Indeed, New York State has cut 20,000 hospital beds over the last two decades — one thousand each year.

Thus, as Cuomo is lauded today as a champion of the Empire State’s vulnerable population in the face of Covid-19, he has undermined public health. His political career has been shaped by his close alliances with capitalists who have funded his multi-million dollar campaigns. Since he was first elected, Cuomo has raised over $100 million in campaign contributions, most of which have come from big donors and special interest groups. Even Cuomo’s Covid-19 task force is made up of millionaires: Bill Mulrow, Steve Cohen, Larry Schwartz, and others who Cuomo has had a longtime relationship with.

Cutting Medicaid and Services When People Need Them Most

Despite Cuomo’s current celebrity status among many, the governor of America’s most unequal state can’t help but attack the most vulnerable sectors of society, even amidst the crisis. A Cuomo-appointed panel has proposed $400 million in cuts to New York State Medicaid just for next year, while the overall Medicaid cuts would total $2.5 billion over several years. While such cuts are criminal and appalling, they should not be surprising. In a recent news brief, Cuomo bragged that he has cut taxes every single year, while keeping the state’s spending lower than average: political lingo for austerity measures. For Cuomo, it’s not the wealthiest people and big corporations who should pay for society’s big expenses, it’s the poor and the working class. One need only look at Cuomo’s servile courting of Amazon, a company that pays zero dollars in federal taxes, while ruthlessly exploiting its workforce with meager wages.

Cuomo’s role as a big-business, neo-liberal governor was summed up nicely by Teen Vogue:

“Despite Cuomo’s recent efforts to brand himself as a ‘progressive,’ the governor has led as a corporate-friendly Democrat for years — putting himself and his wealthy donors above the well-being of working New Yorkers. He’s provided inadequate funding for public housing, gone to war with labor unions, and vetoed protections for low-wage workers.”

Cuomo has also been joined by NYC mayor Bill de Blasio in making deep-going social welfare cuts. In a recent press conference, de Blasio made clear that working people can expect new rounds of austerity measures in the midst of the health crisis, proclaiming a compulsory “Program to Eliminate the Gap” (PEG) that will force city agencies to come up with $1.3 billion, if not more. Neither de Blasio nor Cuomo are willing to encroach on the vast fortunes of New York State’s billionaires; instead, New York Democrats are intent on making working people pay for today’s health and economic crisis.

Addressing the Pandemic, but at Whose Expense?

As the coronavirus pandemic was just beginning to take foot in NY at the beginning of March, Gov. Cuomo was proud to announce in a press conference one of his first initiatives to address the looming crisis: New York State would be manufacturing its own hand sanitizer to fight egregious price-gouging and to address high demand. When an attendee suggested that distilleries be converted to manufacture hand sanitizer, the governor scoffed at the notion of “closing down bourbon.” Instead, New York, the “progressive capital of the nation,” would be using prison labor to produce such a highly demanded product, a fact which Cuomo neglected to mention in his address. New York would be relying on its most vulnerable populations to fight a pandemic, populations which are likely to face the brunt of the outbreak. While Cuomo is being lauded for his efforts to address the coronavirus crisis in New York, more than 51,000 incarcerated individuals lack access to functioning sinks, paper towels, and soap, all necessary to combat a deadly virus, let alone have access to this newly manufactured New York hand sanitizer, a product which is often contraband for inmates.

Further, Cuomo has neglected to adequately address overcrowding in New York’s prisons, a feature that will likely prove fatal during the outbreak of a pandemic. Approximately 1,110 people have been ordered for release at the time of this writing, despite confirmation that both personnel and members of the prison population at a variety of NY correctional facilities have tested positive for COVID-19, including at Rikers Island, notorious for its overcrowding and inhuman conditions.

Additionally, Cuomo’s sweeping actions to address the pandemic have come with some rather glaring caveats which have largely been left out of public scrutiny. By declaring a state of emergency, Cuomo gained the power to change or suspend laws unilaterally, a power of which he is already taking advantage. Likewise, in his effort to pass a “crisis budget,” Cuomo has been attempting to clandestinely roll back bail reforms put in place just this past January, which restricted judges’ power to put defendants in jail.

The Impending Crisis: Thousands Will Die so a Few May Profit

The public health crisis wracking the Northeast is only beginning, but the projections are grim. New York State is projected to need at least 140,000 hospital beds, but it has only 53,000. Both Cuomo and de Blasio have implored Trump to use the Defense Production Act to produce ventilators, of which New York needs at least 40,000, and to send military-medical aid to provide more resources. But while Trump completely denied the coronavirus threat for weeks and has since declared his willingness to endanger tens of millions by “returning to work by Easter,” — a medically unsound claim that he has now walked back — Cuomo, de Blasio, and the entire Democratic Party political establishment share responsibility for the scale of the developing emergency.

They are trying to balance across a tightrope: on the one hand, they are firmly committed to serving their corporate and real-estate masters, while at the same time they must proclaim to be serving the “public good” and doing everything they can to keep people healthy and safe. Yet, in this class-divided society, where homeless people live in squalor while billionaires buy private islands, the needs of the masses come into direct conflict with private property and the U.S. American “oligarchy.” The basic interests of New York’s multi-racial, immigrant, and working class population is counter to those of Wall Street, the real-estate giants, and the rest of the 1%.

There are dozens of concrete measures Cuomo could take to protect New York residents. To name a few, he could house the homeless, release prisoners and immigrant detainees to avoid mass fatalities in overcrowded detention facilities. He could mandate that all construction be re-directed toward building new hospitals and medical facilities. He could allocate emergency funds to drastically expand EMS and hospital personnel. And lest we forget, Cuomo could also tax his wealthy friends to provide the necessary resources for disaster relief. But he will only take such measures under mass pressure, as they are anathema to Cuomo’s whole agenda.

In a time of extreme social crisis, these measures are not far fetched or utopian. Cuomo himself has already taken some of these extreme measures in his suspension of mortgage payments and foreclosures. While this would certainly provide some relief for a proportion of people in rural and suburban areas of New York State where it is more common to buy homes and take out a mortgage, it does not address the hardship of millions of working class New Yorkers who rent their properties. And in New York City specifically, where property development is a billion dollar industry, a suspension on mortgages will largely only benefit the land and property-owning elite. Some cities have actually begun to house the homeless and significantly reduce the population in jails and prisons.

Sadly, Cuomo has been propped up by much of organized labor and sectors of the Left. As the working class braces for months, if not years, of hardship and uncertainty due to the current crisis, the need for independent working-class organization has never been more urgent. Emergency measures are needed to address the public health crisis: measures that truly put people over profit. It is high time that working people divorce Cuomo and all the capitalist politicians, Republican and Democrat alike, who offer us nothing but austerity, sickness, and death. Now, more than ever, the working class needs a political party of their own: a party that fights every form of oppression and is willing to tear down the profit system. Capitalism is sick, and we desperately need a cure.