No Evil Foods, a Vegan Meat Company, Cashes in on Revolutionary Politics While Busting Unions

No Evil Foods, a vegan meat company, cashes in on leftist politics with products such as “Comrade Cluck” and “El Zapitista” while spending thousands of dollars to dissuade employees from unionizing. 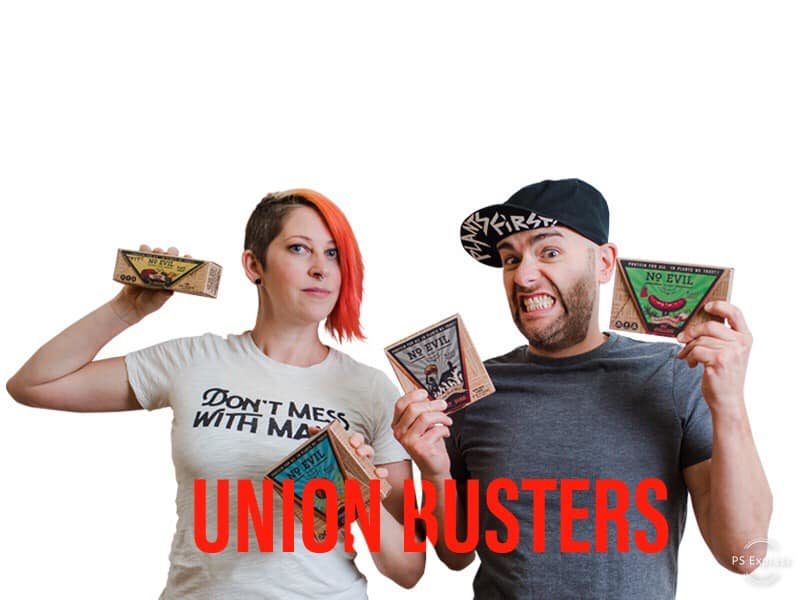 No Evil Foods has branded itself as a leftist, conscious, and disruptive company, attempting to change the world through its vegan meat alternatives. Founders Mike Woliansky and Sadrah Schadel started out selling their plant-based products in 2014 and have quickly become one of the fastest growing start-ups in North Carolina. With the help of Blue Horizon Venture Capital group, among other large scale investors, No Evil Foods is being sold by 5,500 retailers and in all 50 states. However, their image really needs you to know: they’re not regular capitalists, they’re cool capitalists.

Schadel and Woliansky, a young couple, share marketing images of themselves with ever changing asymmetrical haircuts, featuring various shades from the Manic Panic collection, and scruffy beards. The mission statement they’ve adopted is curated around their brand existing “to empower people to make positive changes for themselves, the environment, and the welfare of animals through awesome food.” Several workers in the factory have noted that they call themselves “revolutionary leaders.” Which begs the question: Why are revolutionaries trying to squash their employees’ attempts at unionizing? Is it revolutionary to ignore workers’ health concerns during a pandemic?

In the beginning of 2020, prior to the pandemic, the company’s employees began talks of joining the United Food and Commercial Workers International union (UFCW). The “revolutionary” founders began initiating near constant anti-union measures to make sure this never happened. On the window of their office, next to the flyer declaring it the “Red Room” with an insignia with a fist on it, was a “Vote No” bumper sticker. They hired a famous anti-union law firm (Constangy, Brook, Smith and Prophete) and spent an estimated $2,500 per day on their services. The anti-union tactics deployed were described by employees as “hostile.” 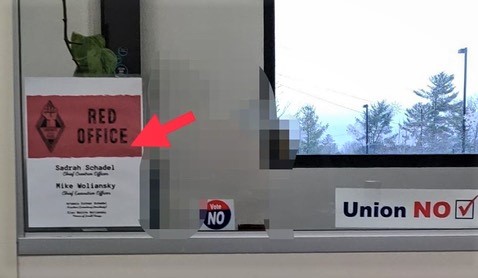 The most used technique was frequent “captive audience”’ meetings in small enclosed spaces, where the founders and others would go on long-winded speeches full of anti-union propaganda. An audiofile was found of a twenty-minute speech by founder Woliansky, full of pro-capitalist messages. In the speech, Woliansky pitted himself and his partner Schadel as incredibly giving and fair bosses, claiming, “I believe a union would pit us adversaries.”

It’s true, No Evils Food treats its employees better than is legally required of them. The North Carolina minimum wage is a pitiful $7.25 an hour. The company is Living Wage certified, paying their employees $13.65 an hour with health insurance. However, Woliansky’s wild claim that “A union contract would only serve to lessen our impact at a time when it’s so important in the world,” shows his true interests. No Evils Foods serves capitalism, but a “clean” capitalism. And the owners are the kind of moralistic bosses who will find it in their hearts to give benefits to his employees but still retain the fear of collective, worker-led organizing.

Within the founders’ anti-union rhetoric, there was another troubling element: a purity politics that didn’t want itself associated with meat. As a vegan brand, the founders attempted to highlight the indecency of associating the company with the same union that represents workers in the slaughterhouses.The meat packing industry was described as an “unclean” and “global warming contributing” industry, the antithesis of the “clean living” image No Evil Foods was curating. Woliansky painted the UFCW as a corrupt institution that would force co-workers to work side by side with their sexual harassers and funnel their dues to overpaid union bosses. While there are criticisms that can be thrown at the UFCW leadership, coming from a capitalist in a hipster hat, these criticisms fall flat.

In the end, the tactics worked, and the vote was 43 to 15 in favor of not joining the union. However, this was not the end of the union busting. The company has since made it its mission to sniff out any pro-union employee and utilize flimsy excuses such as dress code violations to fire them.

Cortne Roche, a production worker involved in socialist organizing, posted a petition for hazard pay online with several pro-union employee signatures featured. In the petition, the workers write about the company’s policies during the beginning of the COVID-19 crisis, or lack of policies, lack of PPE, and lack of any sick days or paid time off. The workers say, “This is the behavior of cutthroat, right-wing capitalists, not “revolutionary” leaders. And this is certainly not the behavior one would expect from a company calling itself ‘No Evil’ Foods.” While the company ended up giving a $2.25 raise for hazard pay, many of the people who signed the petition have been fired.

This was allegedly done through “shadow write-ups,” a system of writing up employees for small infractions and then citing these violations only when firing them. The company is  currently being sued by three separate former workers for wrongful termination. According to Roche, “It’s not in the interest of a company that exploits workers to give those workers any say in the company. Even a vegan company called No Evil.”

Schools for Chiapas, an organization that helps fund schools controlled by the Zapatistas, has condemned these union-busting activities and No Evil’s use of “El Zapatista” as a name for their vegan chorizo. On March 6 they tweeted, “we do not condone the exploitation of the Zapatista cause for marketing, and were unaware that we had been listed as allies.” The organization made it clear that they support unions and that their organization’s logo was put on No Evil’s website without their consent.

During this pandemic, we don’t need a green capitalism to save us. There are no corporate mission statements that will make up for true worker-led struggles. Food processing plants have rapidly become the most dangerous essential job, with meat processing plants having the highest cases of infection rates compared to any other job. Instead of vegan capitalists turning their noses to this  predominantly immigrant workforce, there should be solidarity. Green capitalism will co-opt the images of revolutionary power for its own profits, but the socialist cause doesn’t need capitalists in its ranks. True revolutionary leaders don’t union bust.