No Justice in a Racist System: Kyle Rittenhouse Walks Free

In a monstrous display of systemic racism, Kyle Rittenhouse, the white supremacist vigilante who was caught on camera murdering two unarmed protesters and injuring a third, has been absolved of all charges brought against him. The ruling follows a blatantly biased trial and proves once again that there are separate “justice” systems for white people and people of color. 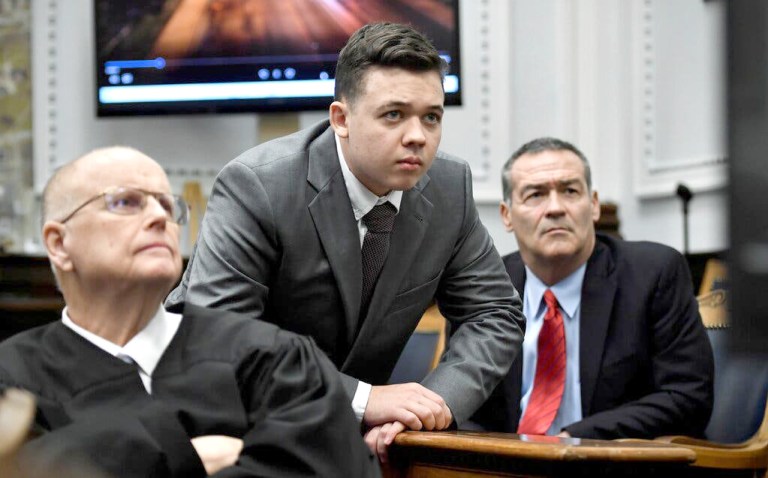 Today, a jury in Kenosha, Wisconsin, found Kyle Rittenhouse not guilty on all counts, despite the fact that he was captured on video murdering unarmed protesters who had gathered in the aftermath of the racist police shooting of Jacob Blake. The verdict cannot be separated from the racist history of the United States, the well-documented existence of separate “justice” systems for white people and people of color. “Self-defense” is routinely awarded to white people as justification for vigilantism and outright murder, as we are seeing right now in the trial in Georgia of the white men who chased down and killed jogger Ahmaud Arbery.

The fix was in for Rittenhouse from the beginning. It didn’t matter that he was a 17 year old who crossed state lines with a weapon he had illegally, or that he went hunting for demonstrators who had joined the Black Lives Movement to protest the shooting of Blake in the back by a white Kenosha cop. The Kenosha cops welcomed Rittenhouse to their ranks. They let him escape from having gunned people down in the street, even giving him a bottle of water as he made his escape.

After Rittenhouse was arrested, he became a symbol for the far right. Massive fundraising efforts got him out on bail and provided high-powered defense lawyers. As he awaited trial, pictures emerged of Rittenhouse grinning and flashing a “white power” symbol and wearing a t-shirt that read “free as fuck.”

The judge dismissed the weapons charge, despite the fact that Rittenhouse was clearly guilty. In ruling after ruling from the very beginning, the judge made it clear that he was on Rittenhouse’s side. The men Rittenhouse killed could not be called “victims.” They were “rioters” and “looters.” At one point in the trial, the judge’s cellphone rang, and Lee Greenwood’s “God Bless the USA” rang out. It’s a song featured at just about every rally Donald Trump ever held.

During the actual trial, it became clear that that there was zero evidence that self-defense was warranted. But as Rittenhouse’s lawyer said on the steps of the courthouse, this verdict indicated the “thousand-year-old right” of self-defense for “our hero Kyle.”

The United States has two different court systems. In one, white people — especially those of financial means — are routinely excused for even the most heinous crimes, including murder. In the other, people of color — especially Black people — are routinely sentenced to death even when there is overwhelming evidence that they did nothing illegal. That is what happened to Julius Jones, who has spent more than 20 years in prison for a crime he didn’t commit, and whose execution was called off just hours before he was going to be put to death. Anyone who thinks the Oklahoma governor did that out of compassion isn’t paying attention; it was the result of a massive public outcry and a student walkout. And the fact remains that Jones is still sentenced to a life in prison for a crime he did not commit.

The Rittenhouse verdict is an attack on every single person who took to the streets last summer and chanted Black Lives Matter. Rittenhouse and his ilk could have murdered any one of us. This verdict declares open season on all of us, especially Black and Brown activists.

A “justice” system that works the way the U.S. system works is no accident. It is part and parcel of an oppressive capitalist system based on exploitation and repression. The Rittenhouse verdict must bring people into the streets to protest. But we must be clear: the courts and the parties of the ruling class, Democratic and Republican alike, will not protect us. In fact, it was a Democratic governor who ordered hundreds of National Guard troops into Kenosha’s streets to quell the protests last year, and who deployed the Guard again in anticipation of the verdict.