On August 5, India’s right-nationalist BJP government scrapped Kashmir’s special status protecting their autonomy and divided it into two regions. While the government paints this as an administrative move to bring progress to the region, the state is occupying Kashmir and actively repressing its 7.5 million Muslim-majority population. 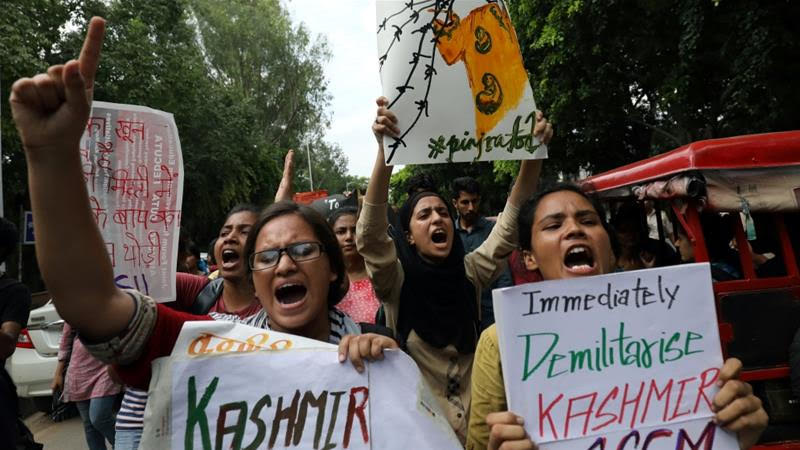 In a devastating blow to the fight for self-determination in Kashmir, the Bharatiya Janta Party-led union government in India has revoked the state of Jammu and Kashmir’s special status and stripped it of statehood. As the region is held in darkness, with the military violently enforcing curfew, suppressing the civilian population and detaining hundreds of political prisoners, the fight for Kashmiris’ right to self-determination is reaching a critical point.

Kashmir Caught in the Middle

Sandwiched between India and Pakistan, the Himalayan valley region of Kashmir has long been the subject of conflict between the two countries. It is a dispute that dates back to 1947, to the partition of British India into Muslim-majority Pakistan and Hindu-majority India. As one of the 650 princely states that existed within these two newly independent nations, Kashmir had the option to join either nation-state or remain independent. Although the ruling prince at the time, Hari Singh, a Hindu ruler in a Muslim-majority state, refused the two-nation theory, growing armed insurgency from Pakistan forced him to seek India’s help, leading to the Instrument of Accession that formally ceded Kashmir to India. Following two wars between India and Pakistan in the immediate aftermath of the accession, and a ceasefire that conceded 35% of the state to Pakistan, Kashmir was formally incorporated into the Indian Union in 1957 as the state of Jammu and Kashmir. To protect the region’s autonomy, Articles 370 and 35A under the Indian constitution provided Kashmir with special status. The terms protected Kashmiris’ rights to land, scholarship and opportunity and allowed Indian governance only in matters of defense, communications and foreign affairs.

However, with both India and Pakistan claiming rightful “ownership” over the totality of this Himalayan valley, violence remains an everyday reality in Kashmir. For decades, there has been an uneasy stalemate, often broken by wars, military incursions, terrorist attacks and police crackdowns. In the territory that falls under Indian jurisdiction, state repression has been particularly deadly, with the region having become one of the most densely militarized regions in the world. With over 700,000 troops occupying a region of approximately 85,000 sq. miles and 7.5 million people, military presence is stifling not only along the state’s international border, but also in public and social life. The Armed Forces Special Powers Act and the Disturbed Areas Act, have not only given the military unbridled power over the state’s administration and public sphere. Over the decades, multiple reports have documented the Indian government’s human rights abuses, including extrajudicial killings, torture and enforced disappearances. A 2015 report by the Jammu Kashmir Coalition of Civil Society, outlines the systemic violence that has been allowed to take root and grow in the region over the last two decades that include extrajudicial killings, disappearances, sexual assault and rape.

The Struggle for Self-Determination

What has been historically silenced over years of struggle, however, has been the right to self-determination for Kashmiris. For people in the valley, calls for azadi, or freedom, have amplified over the years. With generations of Kashmiri youth coming of age amidst conflict and curfew, the human cost of this struggle has increased exponentially. In the last three decades, over 70,000 people, mostly civilians have died in pro-independence uprisings. Indian security forces have often detained, disfigured and killed civilians, and write these abuses off by labelling the victims members of separatist militias trained by the Pakistani military. In recent civil disobedience actions, police have resorted to tying civilians to their wagons, using them as human shields from stone pelters. Among Kashmiris, pro-independence activists and separatist rebels command widespread support, as many civilians die at the hands of Indian forces.

While previous Indian governments have, at the very least, maintained a show of civility and democracy in their attempts to bring Kashmir into the national fray, the current right-wing Hindu-nationalist ruling party, the Bharatiya Janata Party (BJP), has explicitly sought to present the Indian state as sovereign in all matters concerning Kashmir. Delivering on one of their main campaign promises from their 2014 campaign and 2019 re-election bid, the Narendra Modi government has, as of this week, effectively erased all legal provisions that once protected the autonomy of the region in the name of national integration.

After preemptively putting the state of Jammu and Kashmir on lockdown, fearing potential violent backlash, Home Minister Amit Shah announced on the morning of Aug 5 that it was abrogating Articles 370 and 35A, stripping Kashmir of its special status, and splitting up the state into two Union Territories, thereby putting the region under the direct control of the union government. As of today, Kashmir continues to be in the dark, with communications and internet services suspended, thousands of troops enforcing curfew, and major political leaders of the region, particularly those that stand in opposition to the current government, put on house arrest. The authoritarianism on display spells danger not only for millions of Kashmiris, but also for any pretense of democracy across the rest of the country. At the very least, it makes India an occupying force in the region.

For over a year, following the collapse of the majority coalition in the state assembly, Jammu & Kashmir has been without an elected state government. The BJP-led government has used this opportune moment, where “the will of the state” is administratively expressed by the Lieutenant Governor, a non-elected official appointed by a President sympathetic to the BJP, to strongarm their way to the resolution they want. In addition to steamrolling the passage of the presidential order dissolving Article 370, the government has sought to further break apart Jammu & Kashmir’s autonomy by dividing the state up into two regions and downgrading them to Union Territories—regions with no local and state assemblies and under the direct control of the union government. This is all but guaranteed since, as of August 6, both Houses of Parliament are set to approve and ratify the bill.

The Modi government has not only legislated on bad faith, but has furthered its own interests by employing extraordinary levels of secrecy and repression. While the BJP government paints itself as a transformative force for good, arguing that Article 370 stood in the way of women’s, Dalit and tribal rights, it has trampled on the rights and liberties of the very people it claims to be liberating. For decades, middle-class Kashmiris who are able to move away from the region and flee state repression have done so, leaving behind a largely poor and working class population that is forced to face the brunt of state violence.

In the conversation around the national integration of Kashmir, the voices of those living in the region have been systematically silenced. In relation to recent events, what started with the evacuation of Hindu tourists on pilgrimage and the deployment of nearly 40,000 additional troops last week, has now turned into a complete media blackout. With phone, internet, and television services blacked out, communication with those in Kashmir is near impossible. Curfew has been implemented with an iron fist, with troops laying steel barricades, armed police stationed every few hundred metres, schools and shops closed, and a blanket ban on public gatherings of four or more people. Security forces in the state capital of Srinagar were quick to thwart the few sporadic protests that broke out in the city on Monday, firing tear gas and pellets on those attempting to assemble and organize.

Asked about recent developments, the Indian consul general in New York released a statement that said revoking Article 370 was “purely administrative” and was intended to “improve good governance and deliver socio-economic justice to the disadvantaged sections of the people in the State.” It is telling that “socio-economic justice” for the only Muslim-majority region in India does not come in the form of freedom and justice for its people, but in the ability of settler populations to migrate and buy land there, especially with Hindu majoritarianism on the rise.

Controlling Kashmir has never been about winning the faith of the Kashmiri people, who have long viewed Indian military presence as an occupation. When Kashmiris are denigrated, demonized and labelled as terrorists across the country, the Indian government’s expression of care for their economic development hardly seems central to this latest project of annexation. For ethno-nationalists like the Hindutva right who have long admired Israel’s treatment of Muslims in Palestine, Kashmir is soon to become their West Bank, where they can claim ownership over territory that they see as rightfully theirs, and subjugate or expel those they see as illegitimate, i.e., Kashmiri Muslims.

As India Moves Right, Where Does That Leave Kashmir?

The removal of Kashmir’s special status is only the latest in the BJP’s project of Hinduization of India. Whether it is the BJP’s election campaign and post-election polarizing rhetoric, their threat to implement the National Register of Citizens across the country to find and deport Muslim immigrants, the rise of mob lynchings of Muslims and minorities in the country by members of the Hindutva right, or the constant barrage of “go back to Pakistan” chants in the face of any criticism of the state, there has been a constant reification of the idea that the country is no place for Muslims. This recent legislation, now, squarely paints Kashmir as a homeland that does not belong to Kashmiris.

The overwhelming support received by this latest move from “liberal” sections of the government has been particularly appalling. Political leaders who are otherwise congratulated for consistently standing up to the BJP government have shown no spine when it comes to Kashmir. Arvind Kejriwal, the Chief Minister of Delhi, tweeted almost immediately after the repeal of Article 370 in support of the BJP government’s decision. That a Chief Minister who has long been a vocal critic of the union government and of their influence on local administration and legislation in New Delhi, a union territory, is now enthusiastically supporting the degrading of another state is ironic, to say the least.

The end of the lockdown in Kashmir will likely renew calls for freedom with increased vigor and anger. Protests have flared up from Delhi to London, with overwhelming civilian support and solidarity for the people of Kashmir; however, without an organized and continued struggle of Kashmiri workers and all those oppressed by Indian and Pakistani imperialism, the “saffronization,” or legitimation of right-wing Hindu nationalism in India seems likely to continue. Therefore it is critical to not only fight against the Modi government’s power grab, but also to fight for the interests of Kashmiris and center their call for self-determination without Indian or Pakistani state intervention. The erasure of Kashmir’s special status has, by far, been the biggest muscle flex of the Indian government in the face of India’s already fraught plurality and secularity. It is a clear message of how this government plans on dealing with its perceived enemies. As India celebrates 72 years of independence in less than a week while Kashmir is plunged in darkness, it seems pertinent, now more than ever, to ask: who is really free?