No, ‘Medicare for All’ Won’t Take Away Anyone’s Health Insurance

A broad spectrum of conservatives–from centrist Democrats to CNN hosts–love to say that ‘Medicare for All’ will take away your insurance. It is just a lie to shield the profits of the health insurance industry. 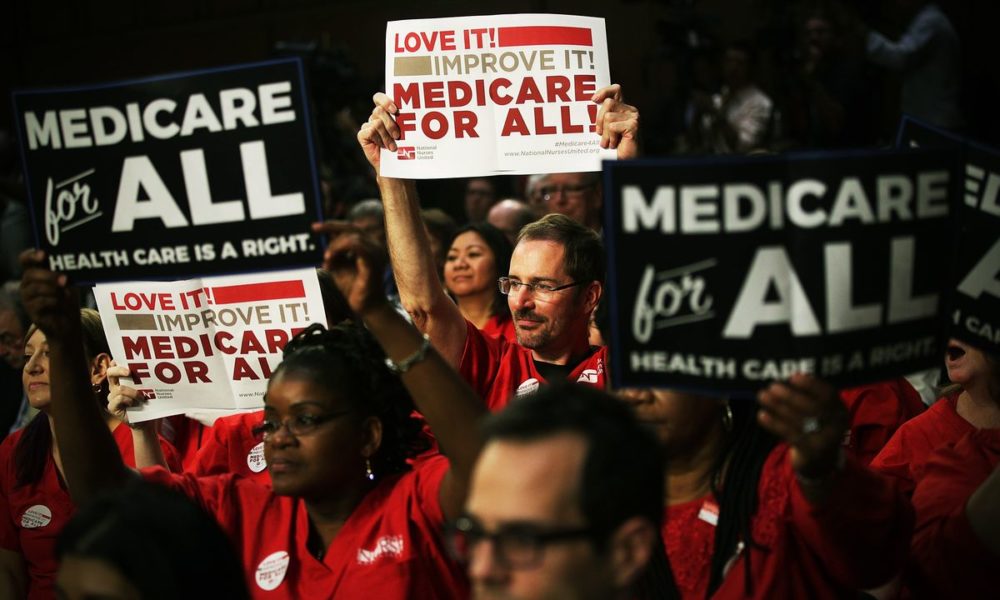 Members of the New York State Nurses Association hold 'Medicare for All' signs at a healthcare rally in Washington DC on September 13, 2017. Alex Wong/Getty Images

It is no wonder that health care has taken center stage at the Democratic Party primary debates: health care in the U.S. is a mess. Roughly 30 million people have no access to health care and hundreds of thousands of families go into bankruptcy for medical debts every year.

Bernie Sanders and Elizabeth Warren have made Medicare for All (M4A) a centerpiece of their platforms, and NYC Mayor Bill de Blasio has followed suit. Many other Democratic candidates are formally endorsing M4A while at the same time stripping it of its real meaning: they pledge to keep insurance companies in the game, though their elimination was really the point in the first place.

These Democrats and those that openly oppose M4A often resort to a cheap shot, claiming that “M4A would take away insurance plans from people that are happy with them.” Even CNN joined the choir of such fools and cynics by  repeating this Republican talking point. During the last presidential debate, Anchorman Jake Tapper asked Bernie Sanders: “You support Medicare for all, which would eventually take private health insurance away from more than 150 million Americans (long pause) … in exchange for government-sponsored health care for everyone.” Wait, so, would it take it away or not? The rhetorical trick being employed here is quite obvious: just repeat that M4A will “take away” health insurance from people and they will begin to believe it. The damage is done even when this is immediately followed by a critical qualifier: everyone will be insured through a government-sponsored plan. Technically speaking, people will have their insurance  replaced by a universal, government-sponsored health insurance plan. One could argue that some people actually want to keep the insurance they have right now. However the current system offers no guarantees of this.  People lose their health insurance all the time. In fact, one in four people involuntarily change health insurance every year, because they switched jobs or because their employer decided to change health care plans, etc.

The trope that “people will lose the insurance they like” is just a dishonest maneuver to keep alive an industry that feeds, leech-like, off of the U.S.’s bloated and dysfunctional healthcare system. As long as employer-based insurance plans are the norm and the insurance industry is preserved, there can be no universal access to health care. It is easy to prefigure how things would work if a softer variant of M4A is implemented: after a “public option” is on the table, private insurance companies will push the government to defund it, and to create all sorts of incentives for people to move to or remain in the private sector. Sooner or later the public option would become a low-quality, overcrowded system that pushes people out. Therefore, anything less than eliminating insurance companies would undermine a plan to provide quality health care to everyone.

In the first night of the CNN Democratic Debate, Democratic presidential candidate Tim Ryan was particularly cynical. His criticisms, however, had a kernel of truth to them. He said, “This plan that’s being offered by Senator Warren and Senator Sanders will tell those union members who gave away wages in order to get good healthcare that they’re going to lose their healthcare because Washington’s going to come in and tell them they got a better plan.”

It is obvious that having universal access to health care, and having it decoupled from employment relations would strengthen workers collectively, allowing them to organize for unionizing drives, go on strike, and resist bosses’ retaliations without the fear of losing their insurance plans along with their job if they are fired. It would also free them to fight for better wages and workplace conditions, rather than having to constantly defend their health insurance. But the only reason Ryan is able to use working-class organizations—the unions—to oppose M4A is because the bureaucracy of virtually all major unions has failed to support M4A, single payer, or any other form of universal health care. Incidentally, Ryan himself is recognizing in his remark that “union members gave away wages in order to [get] healthcare.”

In reality, Ryan wasn’t speaking on behalf of union members, but at the behest of unions’ bureaucratic leaders, who prefer to keep “good health care” as a privilege for unionized workers, and thus, as a key enticement for workers to join unions. Other unions may have different reasons to oppose universal health care, although all of them equally problematic. For example, public sector unions in New York expressed concern about the State’s financial standing, and, indirectly, its ability to afford higher wages for state employees. The collusion between union bureaucrats and Democratic Party politicians is one of the most harmful schemes of U.S. politics, and it goes both ways.

But something unexpected happened at a recent AFL-CIO convention in San Antonio: the Texas chapter of the AFL-CIO passed a resolution to endorse M4A. This is a major event that labor activists should replicate and push for in their unions and labor conventions. There are huge stakes driving major corporations to maintain the healthcare system status quo. Any attempt at winning M4A will face immense opposition from not only health insurance companies, but also private hospitals and other industries in the health sector. Only mass mobilizations—including actions in workplaces, strikes and other disruptions—will get us closer to it. It is vital to get our unions to take a stance and throw their weight behind this campaign.

Union members must organize a rebellion against their bureaucratic leaders to push them to support M4A or another configuration of universal health care. Of course, M4A would still be an incomplete measure. We would need to divorce all profit-seeking actors from health care (Big Pharma, private clinics, medical device manufacturers, etc.) to get something closer to a health care system that works for everyone. But at this moment and in this political situation, supporting M4A is the least that unions can do. They should all commit to it decisively and flex their muscle to achieve it.