No More Imperialist Bombing of Afghanistan!

The United States is preparing for further retaliatory attacks against ISIS-K to “make them pay.” The real people who will pay are the Afghan people. 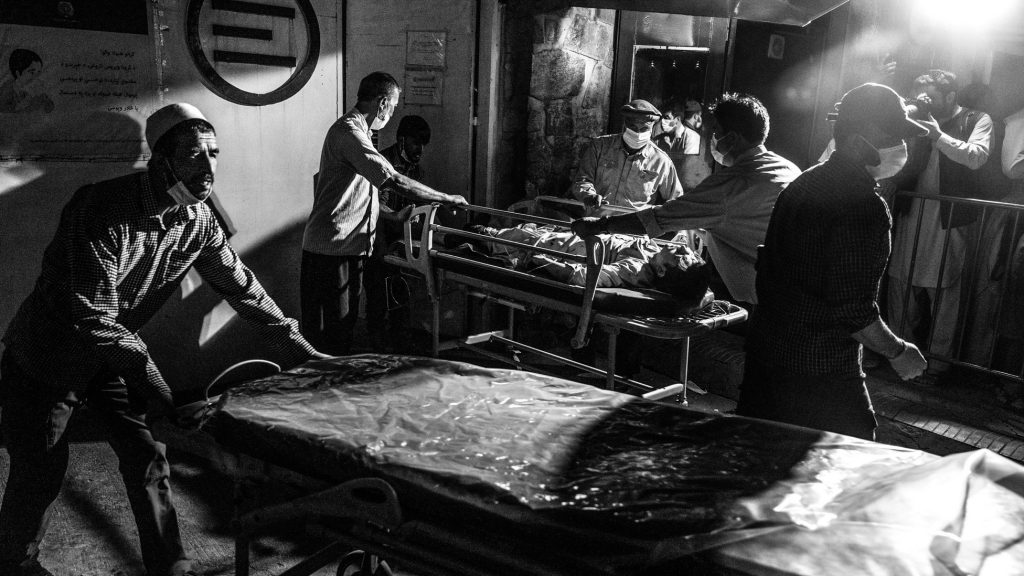 The Biden administration’s already chaotic withdrawal from two decades of imperialist occupation of  Afghanistan got even messier early Thursday morning, after news spread of an explosion at the Kabul airport’s Abbey Gate.

Responsibility for the suicide bombing was claimed by Islamic State Khorasan Province (ISIS-K), an official branch of the Islamic State in Afghanistan that considers itself a strategic rival of the Taliban. The bombing killed close to 200 Afghans and 13 U.S. service members. A BBC report indicated that several civilians were killed by American and British soldiers firing their weapons after the bombing, rather than by the blast itself.

In a Thursday evening speech condemning the attack with loaded, Biblical language, Biden vowed, “To those who committed this attack — we will not forgive and we will not forget. We will hunt you down and make you pay.”

The real people who will pay are the Afghan people.

The Pentagon announced yesterday morning that it had conducted a retaliatory strike on ISIS-K in the Nangarhar province on Friday. According to Major General William “Hank” Taylor, the strike killed two high profile ISIS targets and wounded one. “We know of zero civilian casualties,” he claimed.

There is no reason we should believe the claim that there were no civilian casualties. False reporting by U.S. imperialism of the deaths it causes among civilian populations have a long history. During the Vietnam War, the U.S. military command routinely underreported civilian casualties, often claiming none when reporters on the scene witnessed dozens or even hundreds.

There have already been 71,000 Afghan and Pakistani civilian deaths as a direct result of the war launched by the United States in 2001, according to the Watson Institute at Brown University. That doesn’t count those who died from starvation, exposure to the elements, and other causes that are the byproduct of the occupation. Yet, in 2020, the U.S. military claimed responsibility for only 23 civilian deaths worldwide. If it wasn’t so serious, you might think it was a joke; even the most conservative estimates by non-governmental organizations put the number at at least 102 deaths. These figures do not include civilian deaths caused by the U.S.-trained and -equipped Afghan Air Force (AAF), which also carried out airstrikes and worked in concert with the U.S. military. The Watson Institute revealed that in 2020, the AAF harmed more Afghan civilians than at any time during its history.

Killing civilians means nothing to the Pentagon, which euphemistically refers to it as “collateral damage.”

Since 2017, the U.S. military has operated under relaxed rules of engagement with respect to airstrikes in Afghanistan, resulting in a surge of civilian deaths in the country. In 2019, the Trump administration also revoked a 2016 executive order that required national intelligence officials to assess combatant and non-combatant deaths from U.S. strikes on terrorist targets outside active combat zones, as well as to release an unclassified summary of that information each year. The Biden administration has quietly continued these relaxed rules.

While civilian deaths are especially heinous, every one of the 241,000 total deaths in the Afghanistan and Pakistan war zone since 2001 are the tragic result of capitalism and imperialism. To be sure, war results in military and combatant deaths, but every country has some fighters — almost always from the working class — who go to war for economic and safety reasons. Military recruiters in the United States target poor and working-class youth to fight the capitalists’ wars, a pattern often referred to as the “economic draft.” In Afghanistan, farmers and workers often have to choose between multiple bad options — collaborating with the U.S. military or with the Taliban. We must not forget that all deaths in imperialist wars are avoidable, disgraceful, and a crime against humanity.

U.S. killings of civilians is not, of course, limited to Afghanistan. Since 2001, the United States has conducted air strikes in Pakistan, Yemen, Somalia, Iraq, and Libya, resulting in numbers of deaths that can at best only be estimated (usually by NGOs on the ground), and that are bitterly mourned by countless families and communities.

Ahead of the Tuesday deadline for full U.S. military withdrawal, the tense situation at the Kabul airport is not over. The U.S. embassy in Afghanistan has told all U.S. citizens to leave the airport vicinity, as intelligence officials warn of another imminent strike. During the Saturday briefing, the Pentagon indicated it will continue to conduct counter-terrorism operations “as needed.” The working class must take a firm internationalist perspective and assert that no bombs are needed.

As the Biden administration prepares to order more airstrikes, we condemn all U.S. attacks on Afghanistan and demand an end to the shooting and bombing. We denounce further military intervention. Despite what Biden and the other representatives of U.S. imperialism say, Afghan lives are worth the same as those of Americans.

Remember, imperialist wars are never, ever about “ideals” — they are about profit and power.