“No One is Handed Freedom on a Silver Platter”: Women and the Russian Revolution

An interview with author of Women, State and Revolution, Wendy Goldman. 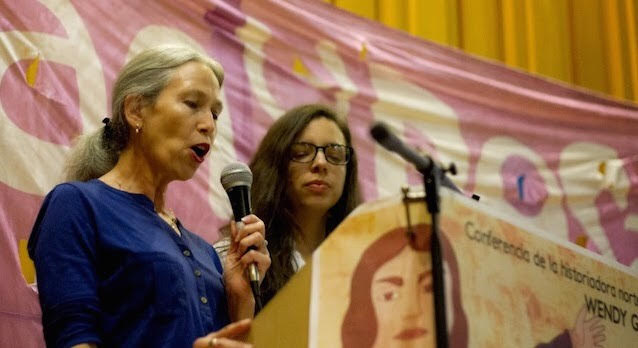 This year we are celebrating the 100th anniversary of the Russian Revolution. In your point of view, why is this revolution so important?

In October 1917, the soviets came to power, replacing the Provisional Government that had taken over after the abdication of the tsar. The soviets were the first democratically elected bodies in Russia that represented working people. They were an example of “direct democracy,” whereby delegates to the soviets were directly beholden to the workers, peasants, and soldiers at the front, who elected them as their representatives. The Russian revolution was the very first in which working people took power and managed to hold power in an entire country.

They immediately aimed to change the relations of property and control, and to create a new way of life that would benefit working people. The peasants took over the lands of the nobility and redistributed it in accordance with family size. Workers took over the factories. In every area of life, people began to rethink how to organize a better, freer life. There were many fascinating experiments with economic planning, law, education, art, as well as basic changes in material life. In the late 1920s, the Sovist state launched the first five-year plan, aimed at the industrialization and development of the country. It was the first example of a such development that was not beholden to foreign capital and elite class interests.

The Russian revolution is that it has many lessons to teach us today. We should ask ourselves the questions: where did the revolutionaries go wrong? Why did Stalinism develop from a revolution with democratic aims? And how can development be better managed, especially in the relationship between town and country?

The Russian revolution should be studied by everyone interested in how to build a better future that is not run according to the profit principle. The ideas of planning are particularly interesting for the millions of people who have suffered from the boom-bust cycles endemic to capitalism, and the destruction of the natural world.

In your book “Women, the State and Revolution”, you outline a historical gains for women during the post-revolutionary period. What were the main victories women achieved during that time?

The Bolsheviks came to power with a basic program of women’s liberation that rested on four principles: free union, women’s emancipation through economic independence, socialization of housework, and the gradual and inevitable disappearance of the patriarchal family unit. They immediately established this program into law. They were the first country to establish women’s full legal equality with men, no-fault divorce, and free abortion in hospitals and clinics. The 1920s were a difficult period with high unemployment, many homeless children, and a ruined economy as the result of the long years of war and Civil War.

Yet by 1930, with the adoption of the first five-year plan, the economy had rebounded and there was an end to unemployment throughout the country. Women moved into the work force in record numbers. People began to study and learn. Peasants became workers, unskilled workers became skilled workers, and skilled workers became engineers and managers. It was period of great opportunity and upward mobility. In no country of the world did so many women enter the industrial waged labor force in so short a time. Re-gendering brigades made up of women entered the factories and mines to determine which jobs could be done by women. They aimed to open semi skilled and highly skilled jobs, once reserved only for men, to women as well. They were successful in breaking many barriers in the work force. Public canteens, daycare centers for children, and laundries were created to help socialize housework. Social relations between men and women began to change.

How was it possible for the Soviet Union to reach such victories under the conditions following a war, with a peasant majority and high levels of poverty? What was the role of the Bolshevik Party in that process?

We should understand that the Soviet Union was not always successful in its efforts. The obstacles such as poverty, low education, high unemployment, the ruined economy of the 1920s, peasant patriarchy and land relations, and lack of funds within the government all made the realization of many ideals very difficult. The Bolshevik Party played a role in this process, but the Party itself was not a monolithic entity. It was composed of members who had their own prejudices and outlooks.

The most important role in pushing the agenda of working women forward was played by working class and peasant women themselves, party members, who knew the difficulties that women faced. Women like Aleksandra Artiukhina and Klavdia Nikolaeva, women who under the tsar went to work as children, who came from the poorest of the poor: children of textile workers and laundresses. These female party members agitated within the Party to set up a separate women’s organization and to push the for the rights and opportunities of women.

The male party members, in the leadership, in the villages, and on the shop floor, were often hostile to their demands. But these women understood that no one is ever handed freedom on a silver platter. People, women included, have to fight for it. Although the Party officially agreed with the aims of women’s liberation, women party members still had to struggle to bring their concerns to the Party. The Party was a very large organization with many layers of leadership from the primary party organizations to the district, provincial, and republic level. It had hundreds of thousands of members (almost 990,000 by 1927) who had very different levels of consciousness.

During the mid 1920’s, some setbacks began to take place concerning women’s rights. What were they and how did they occur?

The main setbacks occurred as a result of very high female unemployment in the first decade after the revolution and the famine of 1921. The famine, coupled with the economic ruin and destruction of the long war years, created millions of homeless children. Although the state had aimed to socialize reproductive labor, and create homes and orphanages for these children, it did not have the funds to do this. The first retreat from its program came in the early 1920s when it decided to encourage peasant families to adopt the children. Initially, it forbade adoption because it feared that peasants would use the children as unpaid labor within the household. Other problems occurred because of women’s high unemployment coupled with ease of divorce. Many men divorced their wives, leaving them with children to support. Women, unable to find jobs, were forced to resort to prostitution. This was seen as a great shame of the revolution.

What are some lessons that women who struggle for equality today can take from the Russian Revolution?

There are many important lessons we can take. First, the Russian revolutionary program contained many ideas that are worth studying, especially the idea about full employment as right, financial independence, and the socialization of household labor. Women in most countries of the world today still do not have access to public dining halls; good, fully funded daycare centers for their children; laundries; and other services that would free them of of household burdens.

When I last spoke in Brazil, two housecleaners came to me after my lecture. They were very excited about the program to socialize household labor for ALL women. “Why,” they asked, “should poor women clean the houses of richer women and men?” Abortion on demand and healthy forms of contraception are an important rights. Women must be able to control their own bodies if they are to realize themselves as full human beings equal with men. Free choice in marriage and partner is critical. Women and men should be free to choose a partner based on mutual respect and love, and they should be free to dissolve a relationship if it is no longer based on these elements.

Second, the women’s activists within the Bolshevik Party showed us that power is never granted to people willingly by those who hold it. They had to fight for women’s rights within and outside the Party. And it was never easy. There efforts stand as a lesson to everyone fighting for a better world.