No Pigs Allowed: Let’s Kick Cops Out of Our Unions

The call to remove police unions from labor confederations and working-class organizations is gaining renewed force as hundreds of thousands rise up against racist police brutality. 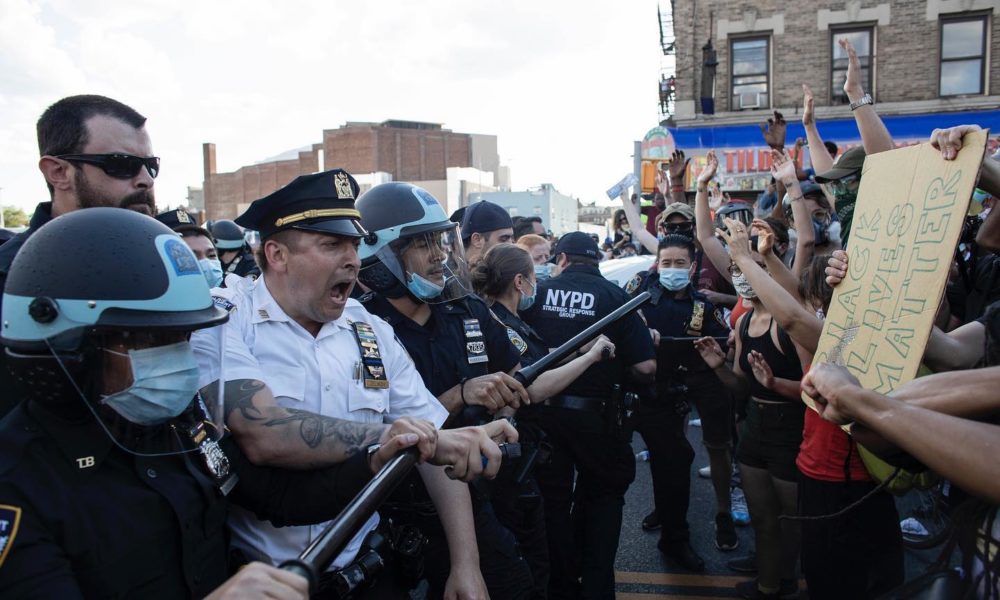 The police have no place in our labor movement and have never been loyal to the public. At its rotten core, the police serve the rich by enforcing the conditions of capitalist accumulation and protecting private property at the expense of human life. It does this by unleashing racist brutality and terror, in conjunction with state-sponsored mass incarceration, on Black, Brown, and poor people.

A cop union protects its members as they carry out their mandate as the violent guard dogs of capital. Whereas labor  unions fight to secure better working conditions, job security, and related demands, cop associations negotiate contracts to ensure that their members have immunity from repercussions for brutality and other injustices. When cops get caught in the “excesses” of their duties — like shooting an unarmed Black man in his car  —  a cop union will defend the officer in court to absolve them of murder. Through union-negotiated contracts, cops who kill on the job are summarily protected and even lavished with paid suspension and leave.

Since 1979, the International Union of Police Associations (IUPA) has been affiliated with the AFL-CIO and represents over 100,000 police officers. The National Border Patrol Council, which represents federal border patrol agents, is also affiliated with the AFL-CIO. In addition, SEIU, CWA and AFSCME all represent police and enforcement agents through their local affiliates. The Fraternal Order of Police (FOP), the nation’s largest cop union with over 340,000 members, has been a permanent advocate for police immunity and against any kind of public accountability.

Police nationwide are closing ranks, claiming “Blue Lives Matter,” and unconditionally defending any cop from the consequences of their brutal actions. Despite performative gestures such as kneeling or marching alongside protesters, their commitment remains first and foremost to “protect their own.” The most recent example is the case of the elderly man in Buffalo who was shoved to the ground by police, cracking his head as he fell. The viral video of the event shows riot police walking past his body as he bled on the sidewalk. When the two officers responsible for this violent assault were dismissed, the entire “Emergency Response Team” resigned in solidarity — making clear that they would not tolerate any kind of measure against their brutal actions.

To back up such collective actions by their members, police unions often include immunity clauses in their collective agreements and lobby hard (and successfully) for legislation that bars any attempt to properly investigate and condemn killer cops. As a result, even though an average of one thousand people are killed by police every year in the United States, between 2005 and 2019, only 3 officers were found guilty of murder. As Kim Kelly states in The New Republic: “The law enforcement community—and especially its unions’—first response, when one of its officers is caught red-handed, is to circle the wagons, vilify the victim or survivor, and bat away any criticism or dissent as virtual sedition.”

Clean up the House of Labor

Police have no place in the house of labor. Unions are workers’ organizations that have historically fought for workers’ interests. To that end, we cannot allow our class enemies to penetrate our spaces. Of course, there is a wide gap between what unions should look like — militant, democratic class struggle organizations — and what they are today in the hands of union bureaucrats; however, kicking out the men in blue — those eager to smash our heads with their batons at the picket lines or in protests — is a good first step towards reclaiming these organizations for the working class.

With the emergence of the BlackLivesMatter movement in the wake of the murder of Eric Garner, Freddie Gray, and Mike Brown, in 2016 local 2865 of the United Auto Workers (UAW) issued a statement demanding that the AFL-CIO end its affiliation with the IUPA. Left Voice editors Julia Wallace and Tre Kwon amplified this call, pressuring their unions to follow suit. As a result, the African American caucus of SEIU local 721 (Wallace’s local) adopted a resolution calling on the AFL-CIO to sever its ties with the IUPA.

With the recent mobilizations in response to the murder of George Floyd by the police, the call on AFL-CIO and other unions to sever any ties with police associations has gained renewed strength. President of Sioux Falls AFL-CIO, Kooper Caraway, tweeted: “It is long overdue for the US Labor Movement to demand accountability from the police unions and associations. We must vote to expel any union that supports the murder of unarmed people.” Similarly, the president of the Minnesota AFL-CIO, Bill McCarthy, called for the resignation of the Minnesota police union president Bob Kroll; however, he stopped short of cutting the relationship with the police union completely.

More recently, MLK Labor’s executive committee passed a resolution demanding that the Seattle Police Officers Guild (SPOG) take concrete actions in order to enforce police accountability and meet within two weeks with representatives from MLK Labor to determine steps in this direction. In the absence of such collaboration, the statement claims, MLK labor will recommend the disaffiliation of the SPOG from the Washington State Labor Council.

On Monday, June 8 the Writers Guild of America East called on the AFL-CIO to terminate its affiliation with the IUPA, on the grounds that it consistently advances “authoritarianism, totalitarianism, terrorism and other forces that suppress individual liberties and freedom of association and oppose the basic principles of free and democratic trade unionism.”

Other unions and locals have mobilized demanding justice for George Floyd, and even decided to conduct work stoppages in protest of racist police terror. Locals 10, 34, 75 and 91 of the International Longshore Workers Union (ILWU) as well as the Teamsters local 808 announced a work stoppage on Tuesday June 9 to honor victims of police murder.

In spite of the accumulated anger against the police and increasing pressure from the union rank and file to break ties with police unions, AFL-CIO’s national secretary Richard Trumka has refused to even consider such action. “The short answer is not to disengage and just condemn,” Richard Trumka said on a press call on June 3. “The answer is to totally re-engage and educate.”

The predominant tradition among union leaders in the U.S. is business unionism, which manages unions as if they were merely a service-providing business and the members its customers. Such a myopic view ignores the main contradiction in society: the conflict between the capitalist class and the working class. Only concerned about increasing their dues-paying base, bureaucratic union leaders have often downplayed questions of racial and gender oppression in order not to “alienate” the most backwards elements among their membership. This same narrow concern with increasing (or maintaining) the membership explains the reluctance from labor leaders to disaffiliate cops and cop unions.

Furthermore, in its eagerness for taking conflict out of the shop floor, business unionism relies heavily on grievance procedures, labor-management collaboration, and lobbying politicians to pass legislation that is friendly to labor (often unsuccessfully). This top-down model of unionism actively discourages membership participation and stiffles any dissent within its ranks; after all, a mobilized, empowered rank and file represents a threat to bureaucratic leadership.

For these reasons, we can only expect symbolic actions and empty statements from union bureaucrats. The secretary of the AFL-CIO can repeat a hundred times that they stand against racism and gender oppression, but words only carry meaning if they are accompanied by actions. Except for the notable examples mentioned above, and despite the unequal position and a wide repertoire of tactics in the hand of unions and union federations to exert to demand racial justice, the power of labor remains untapped.

Cops Out of Our Unions!

The push for expelling cops from our unions and federations is a banner that all socialists must embrace and all militant union organizers must fight for in their union locals. Unions must immediately rid our organizations of these hostile elements and take a stance that unapologetically fights racial and all oppression, even at the expense of alienating the most backward members of our class. The best way for conservative workers to leave their prejudice behind is by fighting shoulder to shoulder with their siblings of color.

Labor has a muddy history, filled with betrayals of Black workers and sluggish or merely symbolic responses to systemic racism. Now is the time to show solidarity, stand up against racism, and close ranks against our class enemies: the capitalist class and the agents that enforce their orders. Cops are enemies of workers. Racist police unions have no place in the labor movement.