No Rainbow Capitalism: The Five Worst Corporations to Kick Out of Pride

Pride parades across the countries are full of corporate booths and floats. We’ve picked the five most heinous corporate sponsors. These companies drape themselves in rainbow flags while hurting LGBTQ+ people around the world. 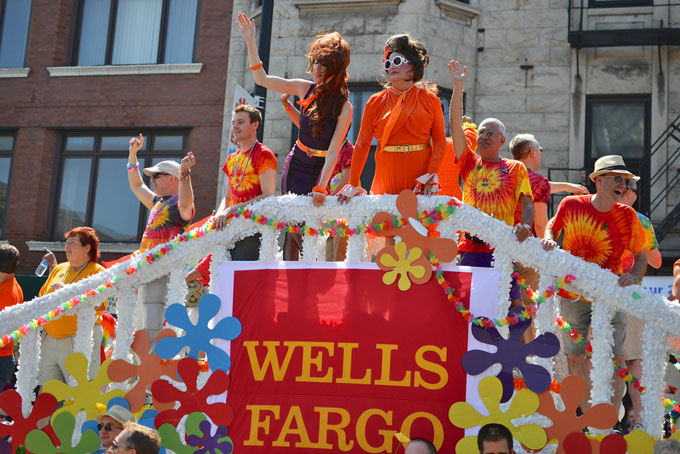 The first Pride celebration was a national march in 1970 to commemorate the Stonewall Riots that had occurred the year before. The biggest event was in Los Angeles, with approximately 1,000 protesters. In 2018, Los Angeles Pride—now more party than protest—attracted over 150,000 people. LA Pride 2018 included dozens of booths and floats bearing the logos of major corporations, with rainbow-colored promotional materials. Modern Pride celebrations are characterized by a large corporate presence.

Many corporations have begun to sell themselves as LGBTQ-friendly in order to increase the value of their brands. But it is important to consider the effect of corporate sponsorship of Pride. Corporations’ accumulation of profits are based on their exploitation of the working class, in the United States and abroad—which means that corporate sponsorship of Pride directly harms the LGBTQ community, especially its most marginalized members, and contradicts work that many LGBTQ activists have done to build coalitions with other marginalized groups.

Here are five of the most heinous corporate sponsors of the Pride celebrations in several major US cities—although this list is far from complete. Any corporation that sponsors pride events does so to distract from the harm that it inflicts on marginalized communities, and we shouldn’t allow pride to be exploited in this way. No more corporations at pride!

Bud Light, a brand of beer, is the top sponsor of Chicago Pride and one of the top eight sponsors of Boston pride.

It’s no secret that substance abuse levels are significantly higher within the LGBTQ community—about 20-30% of LGBTQ people are affected, compared to 5-10% of the general population. This has been attributed to a number of factors. For one, gay bars are some of the only places that are not hostile toward LGBTQ people, and as a result, spending time in LGBTQ community spaces is often synonymous with substance use. Many alcohol companies capitalize on this association by marketing their products to LGBTQ people, who are valued in the corporate world because, facing widespread rejection for their sexuality, they are more likely to respond to public acceptance in any form.

Another commonly cited explanation for the high rates of substance abuse in the LGBTQ community is called “minority stress”—the day-to-day toll that discrimination takes on a marginalized person’s health, which can result in substance abuse when people attempt to manage those consequences by self-medicating. Although targeting LGBTQ people with alcohol advertisements may appear harmless, it has serious implications for the 20-30% of them who struggle with substance abuse. For example, it has been proven in the case of tobacco that “targeted marketing campaigns exacerbate the higher rates of substance use in the gay and transgender population.”

In this context, when alcohol companies market their products to LGBTQ people, their ability to profit relies on the continued marginalization of LGBTQ people. If we were to collectively refuse to allow the alcohol industry to profit off of our oppression, that would mean an end to the alcohol industry sponsorship of pride. It would mean revolutionizing the healthcare system to address community health issues. Healthcare is currently inadequate and inaccessible for LGBTQ people, especially low-income LGBTQ people, and this need can only really be addressed by a free, public healthcare system. This requires solidarity work with other marginalized groups who face similar exploitation and similar barriers to personal and community health, and with workers within the healthcare system—such as the nurses in New York who are fighting for better working conditions as well as better conditions for their patients.

Gilead is one of the top six sponsors of San Francisco pride and a “gold sponsor” of New York Pride.

PrEP, the only HIV prevention drug on the market, was developed and patented by the U.S. government following pressure from AIDS activists. However, all profits from PrEP sales currently go to the drug’s only manufacturer, Gilead Pharmaceuticals. Gilead has priced PrEP at $1,500 to $2,000 per month, even though the cost of manufacturing a month’s worth of PrEP doses is only $6. The company’s outlandish profit margin is pure exploitation of LGBTQ people, who are more likely to contract HIV, and other marginalized populations who are at high risk such as IV drug users, Black and Latinx people, and incarcerated people.

As a result, the most vulnerable LGBTQ people are harmed the most by Gilead’s exploitative policies—those most marginalized, and therefore most at risk of contracting HIV/AIDS, are the most unlikely to be able to access preventative care. That is why the introduction of PrEP has failed to decrease HIV transmission rates. Not only should Gilead be prevented from exploiting pride sponsorship to make their brand more valuable, they should be prohibited from profiting from an essential drug. Such dystopian consequences of the private medicine system clearly show the need to build a democratically-run, worker-controlled system that actually benefits the people who need it most. Modern LGBTQ activists will have to look to the radical actions of HIV/AIDS activists in the 80’s and 90’s in order to ensure that PrEP is made accessible to all.

Santander, an international bank, is one of the top 20 sponsors of Boston Pride.

When the former head of Santander was appointed head of the Puerto Rico Government Development Bank by the U.S. government, he immediately liquidated Puerto Rico’s publicly-financed infrastructure fund and replaced it by selling high-risk bonds that, in total, were worth approximately 70% of the entire island’s GDP. Santander was the “lead or participating” buyer of the vast majority of these bonds, and Puerto Rico may now end up owing the bank ten times as much as the bank initially paid. This unpayable debt has resulted in disaster for the island, and because Puerto Rico is prohibited by U.S. law from declaring bankruptcy, the debt has caused the island to spiral into economic crisis while its infrastructure crumbles.

When Hurricane María hit Puerto Rico in 2017, the state of the island’s infrastructure meant that the storm’s impact was nothing short of a public health catastrophe. The majority of Puerto Rico was left without electricity and running water, and its colonial status prevented aid—including power generators, fuel, and bottled water—from reaching the island. This especially impacted public health: Hospitals did not have sufficient resources to treat patients, while contaminated water resulted in widespread sickness. Additionally, the economic and natural disasters have created a mental health crisis. Mental illness had been on the rise since the beginning of the economic crisis, but suicides and hospitalizations for psychological emergencies have spiked in the aftermath of the hurricane, leaving Puerto Rico’s neglected public health system unable to absorb the storm’s psychological impact.

Santander’s exploitation of Puerto Rico has directly resulted in the death of many Puerto Ricans and the impoverishment of many more. The struggle of Puerto Ricans against US. colonialism is deeply connected to the liberation struggle of the LGBTQ community in the mainland U.S. Members of our community—especially those who are who are HIV positive, mentally ill, or struggling with addiction—are being similarly exploited by corporations. We cannot allow Santander to brand itself as LGBTQ-friendly—and, in doing so, distract from the violence it has committed against the Puerto Rican people.

Airbnb is a “gold sponsor” of New York Pride.

Although Airbnb markets itself as a progressive and ethical alternative to the hotel industry, its actual impact is much more sinister. It profits off the ethnic cleansing of Palestinians by listing properties in the occupied West Bank, which is a war crime under international law. Israel continues restricting Palestinians’ access to resources such as clean water and electricity, expanding Israeli settlements on Palestinian land, bombing Palestinian communities, and using “excessive lethal force” against Palestinian activists, Airbnb condones this colonial violence by doing business with Israeli settlements. As a result of its economic support of the Israeli occupation, Airbnb is a target of the Palestinian Boycott, Divestment, and Sanctions (BDS) movement.

It is absolutely crucial that Pride events support BDS as a bare minimum act of solidarity with the liberation of the Palestinian people because, like the Puerto Rican struggle against US imperialism, the Palestinian struggle against Israeli occupation is closely linked to LGBTQ liberation in the U.S. The Israeli government uses pinkwashing to brand itself as tolerant and modern, while painting the rest of Middle East as backwards and violent. This same government simultaneously uses the sexuality of closeted LGBTQ Palestinians to blackmail them into becoming informants. Pride began as a commemoration of LGBTQ resistance to police violence, and we fail to honor that history when we condone the violent repression in Palestine.

Wells Fargo is a top twelve sponsor of Denver Pride and an “advocate” of San Francisco Pride.

Wells Fargo has a long history of committing atrocities against marginalized people. They were one of the primary financiers of the Dakota Access Pipeline, fully aware that the project would destroy sites of historical and religious significance to the Standing Rock Sioux and poison the drinking water of thousands of indigenous people. This ongoing colonization of indigenous land was also a question of reproductive justice, as water contaminated with oil spills is associated with premature births and high-risk pregnancies, among many other health problems. In addition, development projects on indigenous peoples’ land are closely linked to spikes in sexual violence against native women by non-native men. Given that bisexual women and trans women experience some of the highest rates of sexual violence in general, the DAPL project has had a grave and disproportionate impact on native LGBTQ women.

The bank is heavily invested in the private prison industry. Within the prison industrial complex, which is a form of neo-slavery, private prisons and detention centers are by far the most inhumane. LGBTQ people, and in particular Black LGBTQ people, are incarcerated at much higher rates, given the criminalization of homelessness, substance use, and sex work, all of which are more common among LGBTQ people. LGBTQ people also face much worse conditions in prison: sexual assault, for example, is 15 times higher among incarcerated LGBTQ people than among the general prison population. Those who report feeling at risk of homophobic, transphobic, or sexual violence are often put into solitary confinement.

Wells Fargo is also responsible for intentionally targeting a vast number of Black and Spanish-speaking account holders with fraudulent charges. It has been sued by multiple cities for targeting the same demographics with predatory mortgages that significantly increased foreclosure rates. This blatant and illegal exploitation of Black people and Spanish-speakers results in more poverty and increased housing insecurity and homelessness. This criminalizes the bank’s victims and thus funnels them into the same prisons that the bank is profiting from. Allowing Wells Fargo to profit by sponsoring Pride events is immensely counterproductive to LGBTQ liberation given the severe degree of harm the bank has done to marginalized members of the LGBTQ community.

Kick Out All Corporations

Corporations attempt to divide marginalized people: Some of us are singled out as a valuable consumer base, while the rest of us are treated as expendable. We must resist these tactics and stand together in solidarity with other marginalized people around the world. If we, like the rioters at Stonewall, want justice and liberation for all LGBTQ people, that necessarily means fighting against corporations and cops.