No Time for Coronavirus Relief, Plenty for Amy Coney Barrett

Senate Majority Leader Mitch McConnell has adjourned the Senate until November 9, preventing them from passing a desperately needed coronavirus relief package. The delay is even more atrocious when compared to how quickly Republicans moved to confirm Judge Amy Coney Barrett. 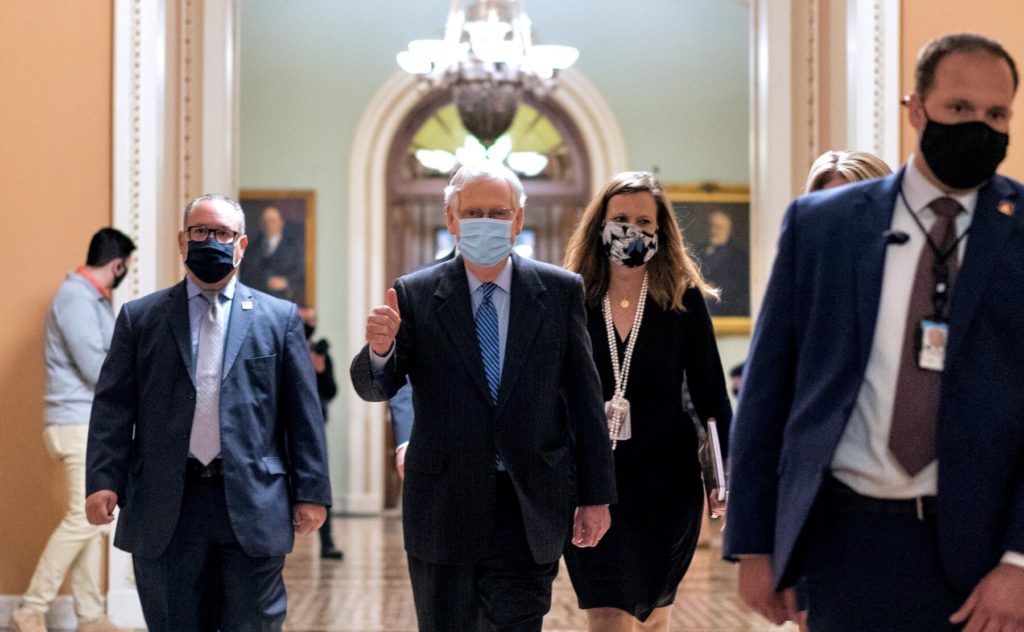 Senate Majority Leader Mitch McConnell has adjourned the Senate until November 9, which prevents them from conducting any legislative business until after the election. This comes on the heels of a show of political theater over the Supreme Court confirmation. Democrats went through the motions of trying to buy time and stall the confirmation of Amy Coney Barett using tactics like going into a closed session to discuss. However, independently of a few small protests, no real concerted effort was made to nationally protest the nomination, showing how hollow the Democrats’ claims to stop Coney Barrett truly were. Ultimately, Judge Amy Coney Barrett was appointed to the Supreme Court with a 52-48 vote on October 26.

There has been a great deal of controversy surrounding the confirmation process. In 2016, Senate Republicans refused to hold confirmation hearings for President Barack Obama’s Supreme Court nominee Merrick Garland because it was an election year and argued that voters should be able to have a say. In contrast, Barrett was nominated just 38 days before Election Day.

The Supreme Court is a deeply undemocratic institution, and the fact that someone from either of the capitalist parties can be elected to a lifetime appointment without revocability is heinous. It only becomes more apparent how disinterested the capitalist parties are in making changes to support the working class when we compare the push to confirm Judge Amy Coney Barrett to the delay in passing further coronavirus relief packages.

There has been a new coronavirus spike in the U.S., with cases totaling over 85,000 nationwide on October 23 — the highest levels we have seen so far. Millions are still unemployed and have lost jobs that are not expected to return for a long time, if ever. The V-shaped economic recovery touted by the capitalist class is nowhere in sight, and instead a recession and further austerity budgets are on their way. Programs like the Pandemic Unemployment Assistance program, which offered federal benefits to groups like the self-employed, gig workers (like Uber and Lyft drivers), and others who were previously ineligible for unemployment insurance from their state, and the Pandemic Emergency Unemployment Compensation that offered up to 13 weeks of extra benefits in addition to the 26 weeks of unemployment insurance states generally pay are set to expire at the end of the year. Evictions are banned until the end of the year and mortgage payments can be lowered or deferred for up to six months, but the CARES Act does not specify how long this relief will be available.

In spite of the mounting financial hardship faced by the working class, the capitalist Democratic and Republican parties have made insufficient and largely symbolic moves to provide economic relief. A Democrat-proposed $2.2 trillion relief plan did not pass in the Senate due to opposition from Republicans, and Democrats rejected the Republicans’ reduced relief bill counterproposals. A disagreement over provisions related to the testing and tracing plan between House Speaker Nancy Pelosi and Treasury Secretary Steven Mnuchin has also stalled the bill. Now that the Senate has been adjourned, a relief bill will not be passed before the election. After the election, there is potential for another bill to pass— although the contents and the amount are not clear. Either way, these bills would be too little too late for the working class that has been struggling for months.

According to Feeding America, 54 million Americans are going hungry, which is 17 million more people than before the pandemic. Almost one in four households has experienced food insecurity this past year. Nearly eight million Americans have entered poverty since May, and within the last three months alone, six million Americans entered poverty. A one-time $1,200 stimulus check is not enough to keep a family housed, the lights on, or mouths fed, especially for the most vulnerable and oppressed within the working class who were already barely making ends meet.

Oddly enough, New Hampshire’s Republican governor Chris Sununu may have said it best: “Fire them all. I really mean that sincerely. No one in the Senate or Congress can say that they’ve shown leadership on the Covid crisis. What have they done since March? Like literally nothing.” However, replacing them with other politicians would not solve the problem. To truly offer the kind of relief that the working class needs, the entire capitalist system must be overthrown. Voting in new bourgeois politicians does not change the fact that the U.S. capitalist class and the politicians who serve it are going to do everything they can to protect their profits and wealth and keep the system intact, including delaying relief for working-class families. We are going to see austerity budgets regardless of who wins in November.

However, the ability of the Republicans to expedite the confirmation hearing of a new Supreme Court justice while both parties drag their feet to pass a stimulus bill demonstrates precisely where their priorities lie. Capitalists are both unwilling and unable to provide the kind of economic and public health infrastructure that is necessary for this magnitude of crisis. We must mobilize to resist the austerity measures that threaten the already precarious working class. Getting another stimulus check is a reform that helps workers, but we must demand more and think beyond that. Nothing short of the overthrow of capitalism will allow for workers to decide how resources should be distributed among them — “From each according to his ability, to each according to his needs.” We must reject bourgeois politics and fight for a workers’ democracy, where working people have collective control over the state.