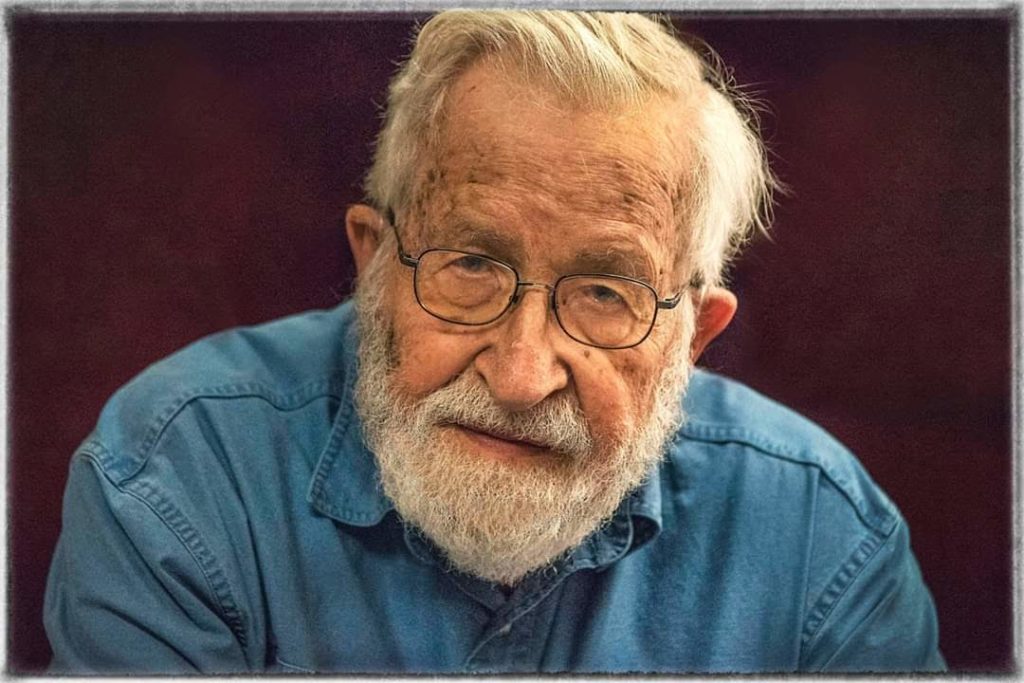 Noam Chomsky, a professor of linguistics emeritus at the Massachusetts Institute of Technology, is one of the most respected intellectuals of the U.S. Left. His critiques of U.S. imperialism and capitalist media have filled dozens of books, and he identifies with anarcho-syndicalism and libertarian socialism. In an interview with Mehdi Hasan from The Intercept last week, Chomsky spoke about leftists who refuse to vote for Biden. #NeverBiden, he said, “brings up some memories”:

In the early 30s in Germany, the communist party, following the Stalinist line at the time, took the position that everybody but us is a social fascist so there’s no difference between the social democrats and the Nazis. So therefore we’re not going to join with the social democrats to stop the Nazi plague. We know where that led. And there are many other cases like that. And I think we’re seeing a rerun of that.

With all due respect to the distinguished professor, his analogy falls apart before he even finishes his sentence. Is voting for Joe Biden the only way to prevent the establishment of a fascist dictatorship?

The obvious answer is: no. Trump is already in power, and while he has certainly been a reactionary figure, the United States has not eliminated basic bourgeois-democratic freedoms. Trump’s campaign for reelection is nothing like Hitler’s because Hitler never ran for reelection, but instead changed the German constitution to allow him to retain and consolidate power. That is precisely the point.

The Trump administration has brought a sharp uptick in capitalist barbarism. This has included racist attacks against Asian-Americans during the pandemic, hate crimes against Muslims, and demonstrations by Nazis that Trump calls “very fine people.” But when we see the horrific images of the U.S. government arresting parents, bombing civilians, or putting children in cages, we can’t ignore that Trump is using the deportation machine, the drone fleets, and the cages for children that he inherited from Obama and Biden. Does the previous administration really represent the civilization that Chomsky wants to defend?

In other words, our fight against fascism aims to mobilize the entire working class with the goal of overthrowing the capitalist system — the system that gives rise to fascism in the first place.

Is Trump, approaching the end of his first term, really crushing the organizations of the working class? The answer to this question can be found in the fact that Noam Chomsky, Mehdi Hasan, and I are all happy to put our names and faces on the internet as Trump opponents. Trump’s base has been responsible for a wave of racist attacks. Yet this is not all that fascism entails. We are relatively confident that no Trumpist paramilitary squads, working hand-in-hand with the police, are going to be rounding us up.

But let us assume, for the sake of argument, that Trump was laying the basis for fascism. Would Joe Biden and the Democratic Party represent a meaningful defense? Biden, after all, was part of the administration that prosecuted Chelsea Manning, Edward Snowden, and Julian Assange — more whistleblowers than any other administration. Obama and Biden still hold the record for the most deportations — more than all previous U.S. administrations combined.

One of the many points of agreement between the Democratic and Republican parties of the U.S. ruling class is their ruthless persecution of opposition — accomplished with “democratic” and not fascist means.

It is true, as Chomsky said, that in 1930s Germany, the communists refused to join alongside the social democrats in the fight against the Nazis, since they considered the former “social fascists.” They were following Stalin’s orders, who had declared that social democracy was the moderate wing of fascism. It is equally true that the social democrats refused to stand by the communists, calling the latter “red fascists.” Both parties had an absolutely criminal policy that prevented the workers’ movement from closing ranks against a mortal foe. This allowed the Nazis to impose the most devastating kind of defeat — a defeat without a shot being fired.

A united front would have meant an agreement on practical measures of self-defense by all working-class organizations, independent of their program. Trotsky described what a united front policy would have looked like:

The Communist worker must say to the social democratic worker: “The policy of our parties is irreconcilable; but if the Fascists come tonight to sack the hall of your organization, I will hasten to your aid with arms in hand. Do you promise me that if a danger threatens my organization you will run to my aid?” There is the quintessence of the policy of the present period. All the propaganda must be attuned to this diapason.1This translation is from a quote in a later essay, as the English is better.

An anti-fascist united front would not have required communists to forgive the countless crimes of the social democratic leaders. The SPD has crushed the revolution of 1918-19 and governed the capitalist republic for years, and it was thus responsible for the murder of thousands of workers. The united front was a proposal for concrete action and an opportunity for communist workers to win over their colleagues who still put hopes in reformism.

You may also be interested in: The Origins of Antifa

What Chomsky is proposing is radically different. If he thinks that Trump’s reelection will mean fascism and the extinction of humanity, why isn’t he calling for mass protests, a new party of struggle, and preparation for insurrection? Faced with such danger, could we really sit on our hands for six months and then hope that the catastrophe can be prevented by putting a slip of paper into a box? Humanity is definitely facing a catastrophe — but Biden’s policies are fundamentally similar to Trump’s when it comes to allowing the capitalists to destroy the foundations of human life.

Chomsky’s proposal is actually much closer to what the social democrats did when confronted by the rise of Nazism. They decided their best bet was to vote for the Prussian general Paul von Hindenburg. This right-wing aristocrat, they were certain, would never let a rabble rouser like Hitler into a position of power. Hindenburg was elected the president of the German Reich in 1932 with social democratic votes — and, with the strong encouragement of the big capitalists, proceeded to name Hitler as chancellor. The rest is history.

A Program of Struggle

We will not stop Trumpism by trying to prop up the system that spawned it. Trump is a product of capitalism in decline. We will beat him by building up a political alternative to this wretched system — an alternative based on the limitless power of the working class when it organizes independently. Trying to tie the working class to a capitalist politician like Biden is the best way to prepare new political monsters.

We need the broadest possible unity to stop attacks by Trump and his base. This means mobilizing the power of working people alongside immigrants, LGBTQ+ people, healthcare workers, and anyone else that the Right sets their sights on. It doesn’t matter if those people are Biden fans, Sanderists, anarcho-liberals, or anything else — the only condition to be part of the defense of democratic rights is the willingness to fight.

But unity does not mean campaigning for a capitalist politician like Biden. In fact, Chomsky’s position will destroy the kind of unity we need for the struggle, turning away huge swaths of people who absolutely despise Biden, and for good reason.

That is the lesson of the early 1930s in Germany: the supposed “defense of liberal democracy” will only end up strengthening the Right, and the only way to defend democratic rights lies in a united mass struggle against the capitalists and their state.

Chomsky is employing a political sleight-of-hand in order to drum up support for a candidate that has trouble winning any support on his own. Over the years, Chomsky has tried to position himself as an anti-authoritarian critic of the Russian Revolution. But he mostly just repeats liberal arguments, and this becomes particularly noxious when he chimes in with soundbites from the Right about the “antifa” movement.

As Russian Marxists used to joke at the turn of the twentieth century, an anarchist is just a “liberal with a gun.” And Chomsky, by all appearances, doesn’t even have a gun.