The Mexico City teachers’ union (SNTE) will begin an indefinite strike tomorrow, July 5. The CNTE teachers’ struggle in Oaxaca is catching fire throughout the country–in the throes of battle against fatal repression, education reforms, and the regime’s attempts to destroy the most organized workers in Mexico. 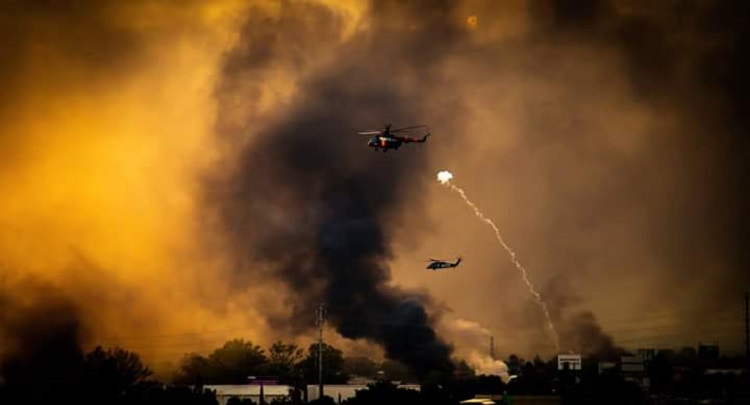 This is a translation from an article published in La Izquierda Diario México. The author, Sergio Abraham Méndez Moissen, is a professor at UNAM and part of the national leadership of the Movimiento de Trabajadores Socialistas (MTS).

The fires burning today are signs of what is to come

For years, the regime has been preparing for the attacks against the organized teachers of the CNTE union (National Coordinator of Education Workers) that are currently under way. Their goal is to destroy the most organized union in the country.

They want to run us over, but we will resist.

The Mexican regime has moved forward with the implementation of various reforms that make way for the imperialist looting of Mexico. There is one step remaining: the privatization of education and destruction of the CNTE.

Since NAFTA in 1994, we have seen a number of right-wing reforms:

The labor reform that turned Mexico into a paradise of cheap labor. The energy reform that sold off Mexican oil to multinational corporations. The national security reform that militarized the country and has allowed the army to violate every human rights agreement with total impunity, as shown by the massacres in Tlataya, Tanhuato and Apantzingan.

The case of the 43 students in Ayotzinapa led to the departure of the Inter-American Commission on Human Rights (GIEI). As if that weren’t enough, the army and the 27th Battalion still have not been investigated for their role in the disappearance of the Ayotzinapa students. For the government, the business sectors and their American allies, total impunity is the law of the land.

The Mexican regime has also viciously attacked the working class. The destruction of the Luz y Fuerza Electrical Union left more than 45 thousand electrical workers without jobs. The regime has clamped down on strikes by the Miners’ Union–with their leader Napoleon Gomez still in exile.

Although strong working class movements have taken place in the north–as seen with the maquila and agricultural workers of Lexmark in Juarez and San Quintin in Baja California–these efforts have been unable to defeat the government and the business sectors.

The current regime has been able to elude the different movements that have questioned its legitimacy, like the #YoSoy132 (“I am 132”) youth movement, the teachers movement of 2013 and the movement for the 43 Ayotzinapa students. Now, in the midst the 2018 electoral campaigns, the government seeks to destroy the teachers of the CNTE–the most organized sector in the country.

The State’s use of widespread solidarity after the repression in Nochixtlán. The massacre ignited a feeling of indignation that has led to a new democratic movement in support of the teachers’ struggle.

In Mexico City, a massive assembly of over 2,000 students, intellectuals and human rights organizations put forth a statement condemning the repression . The statement was supported by hundreds of intellectuals and political leaders, including the SITUAM (Autonomous Metropolitan University Workers) which declared a solidarity strike, called for mobilizations, and have assisted the injured after the repression in southern Mexico. In addition to these actions, the EZLN in Chiapas is leading us to believe that the last word has yet to be spoken in this battle.

On June 30 in Mexico City a wave of spontaneous school strikes, or “wild cat strikes,” took place at dozens of schools in school districts 9, 10, and 11. The strikes had the support of parents and students that organized school and road blockades to assist the teachers and encourage their participation in the strikes and the massive mobilization of more than 15 thousand teachers that followed.

The CNTE today faces a great opportunity in the midst of government attacks. The teachers’ movement is garnering the support of new sectors across the entire country. The attacks can be stopped with strong actions such as a national strike.

It is urgent for the CNTE and other workers’ unions that call themselves democratic and oppose the government [like the New Workers Union (CTN) and the National Workers Union (UNT)] to declare an official date for a nationwide strike. At the same time, there is a need to call on the millions of industrial and service workers within the rigid government-controlled unions to organize and join the great teachers’ movement that is currently struggling in the streets.

A key element is the political regroupment of all organizations that have joined the struggle under the banner of political class independence and together prepare a plan of action and mobilizations to defeat the education reform. It is fundamental that there be a call for a national gathering to coordinate the struggle and to secure the commitment of the Union Nacional de Trabajadores (UNT-National Workers’ Union) and the Nueva Central de Trabajadores (NCT-New Workers’ Central). There is still more to say in this battle over the education reform, and the CNTE will have the last word.