A peaceful march to the polls in Graham, North Carolina, was violently attacked by local cops, who pepper sprayed children as young as 5 and kept people from voting. Left Voice spoke with an activist who was present. 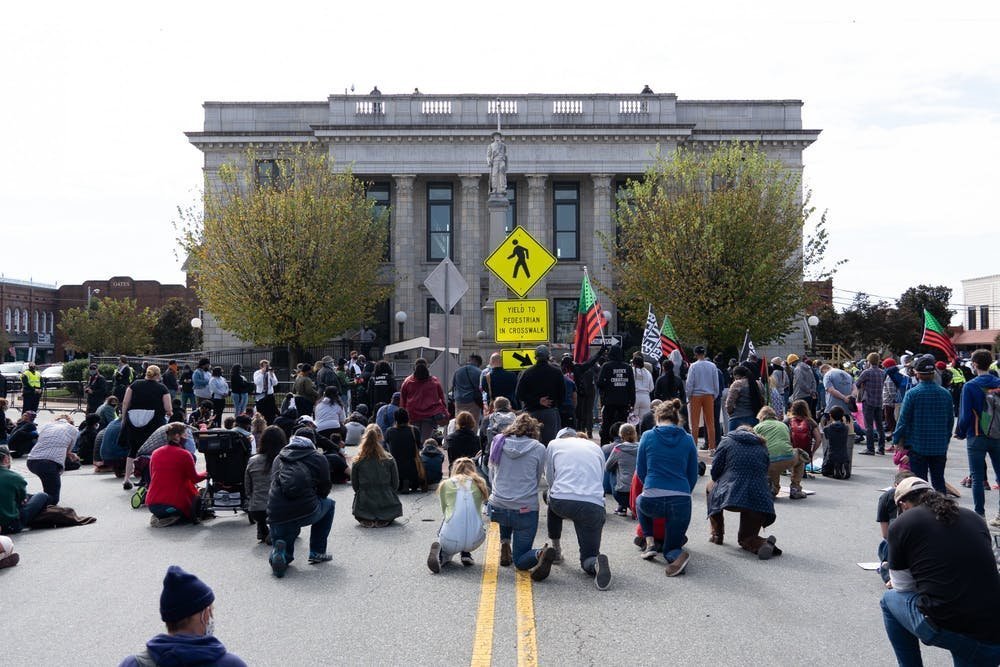 What was supposed to be a peaceful Black Lives Matter march in Graham, North Carolina, earlier today (October 31) turned violent thanks to the local sheriff’s department. It was the cops who massively and violently attacked the march, arresting at least 12 people and injuring many more — including children — with pepper spray.

The permitted march was full of families, led by a pastor, and was supposed to end at the polls so everyone could vote. Later in the day, George Floyd’s niece was scheduled to speak. Children as young as five marched alongside their parents. There were also local politicians, including the mayor of nearby Burlington and some congressional candidates. The march was supposed to be a perfect picture of how the Black Lives Matter movement has been told to behave: be peaceful, don’t break any laws, and collaborate with Democratic Party politicians.

Left Voice spoke with Gwen Frisbie-Fulton, the communications director for Down Home NC, who was at the march with her young son. She’s an activist involved in anti-racist organizing and homeless outreach. Down Home NC has been doing poll protection work and working to “create a safe and welcoming place in Graham,” and so Down Home members from the Alamance County branch were present.

“We’ve been especially concerned about Graham,” Frisbie-Fulton said, “because of trouble there over the summer. Many of our members joined the march. It left from the church, and we marched about a half mile to the Confederate statue — which has been a real fault line, an epicenter of contention in Graham and Alamance County. People knelt at the statue for 8-plus minutes” in memory of the murder of George Floyd. That statue is one of the more than 150 Confederate statutes that still stand in North Carolina.

The sheriff’s department, however, was having none of it. After the marchers rose from their knees, the cops sprang into action, declared an unlawful assembly over their loudspeaker, and then began to deploy pepper spray and make seemingly random arrests.

“The police told us to clear the streets,” Frisbie-Fulton said. “We didn’t understand why. We’d been escorted there, and it was a permitted march. Then, without any warning, they released the pepper spray. Everyone around us was immediately impacted.”

Children as young as five were hit by the pepper spray, and at least one journalist was among at least a dozen people arrested. Videos show children, elderly people, and a woman in a wheelchair coughing and vomiting from the pepper spray.

Frisbie-Fulton described one mother running away from the cops with her 5-year-old daughter, who was dressed as a princess for Halloween. “It was obvious the little girl had been hit.” She also said a Down Home NC member — a mother with her 5- and 11-year-old children — was pepper sprayed and the kids were throwing up afterwards.

Asked about its violent attack, the sheriff’s department stated “The assembly reached a level of conduct that led to the rally being deemed unsafe and unlawful by unified command.”

That is too ridiculous a claim to merit any real discussion. But it should come as no surprise. Cops are violent whenever they want, and make up justifications later. The simple fact is that there is no way to protest police violence in a way acceptable to cops. All summer long, across the country, they unleashed violence regardless of how peaceful protesters might have been.

This horrific attack on a group of the elderly, clergy, children, and people who were just trying to vote shows that it’s not protesters’ demands or tactics that escalate situations, but the police. It’s always the cops. It was cops in Minneapolis who killed a man over an alleged bad check. It was cops in Louisville who killed a sleeping woman for the crime of once dating someone who perhaps had committed a crime. It was cops in Buffalo who pushed an elderly man just because he was standing there. It is the police who pulled people off the street at random and gas people indiscriminately

It is always the police.

“A peaceful march being disrupted and attacked in this way is voter suppression,” Frisbie-Fulton added. “We have people who were attacked today and because of that didn’t make it to vote.”

Whether this was a case of intentional voter disenfranchisement or run-of-the-mill police repression may never be known. But what this situation has to show us is that there is no good way to engage with the police. They don’t work for us, and they don’t care whether we have permits for our marches or that there are children with us. They don’t care about us. They care only about the capitalist masters they serve. The police need to be abolished, along with the entire capitalist system they protect and serve.

Solidarity with the marchers in Graham and victims of police violence everywhere!