In the 1960s, North Carolina was the birthplace of the sit-in movement and the Student Nonviolent Coordinating Committee. Now, protesters in cities across the state are continuing this civil rights legacy by fighting against systemic racism and police violence after the brutal murder of George Floyd. This article looks at the protests of three North Carolina cities, in the ‘60s and in 2020. 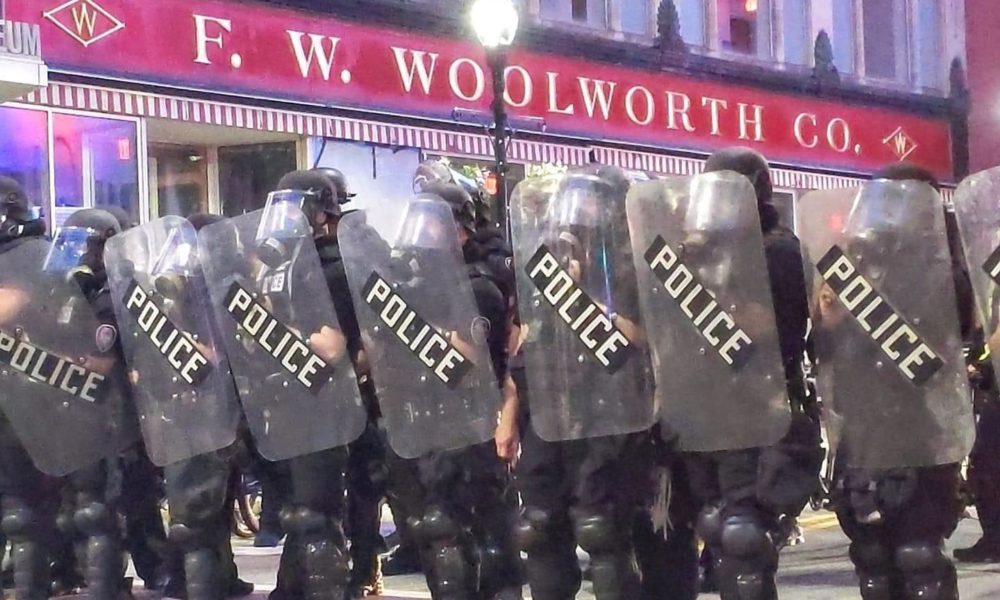 The Greensboro Sit-ins were not the first civil rights action in North Carolina’s history by a longshot, but they are certainly the most famous. What started on February 1, 1960 when four students from NC A&T University took a seat at a lunch counter on downtown’s Elm Street and asked for service erupted into a massive protest of thousands of students from local universities and high schools. The sit-ins soon spread to other stores across the South. This weekend, just over sixty years later, students and other community members took to Elm Street once more to protest systemic racism and police violence after police murdered George Floyd in Minneapolis last week. This article will trace some key moments in North Carolina’s civil rights history and how they resonate with the protests across the state this week.

On February 1, 1960, four students from NC A&T, one of Greensboro’s HBCUs, took a seat at the Woolworth’s lunch counter downtown and each asked for a cup of coffee. They were refused service, but stayed in their seats until the store closed before heading back to campus to recruit more of their peers. On the second day, they numbered two dozen. On the third day, the protest had expanded to around 60 people, including local Black high schoolers and students from Bennett College, the city’s historically Black women’s college. Several members of the KKK, including NC’s official Klan chaplain, came to the store also. On the fourth day, there were more than 300 protestors, including three white women from the Woman’s College of the University of North Carolina (now UNC-Greensboro) who sat in solidarity, insisting their Black peers be served first.

While Woolworth’s finally conceded to integrating its lunch counter after nearly 7 months of sit-ins, Greensboro’s business district as a whole was not integrated for several more years. In May and June of 1963 — exactly 57 years ago— a group primarily consisting of college and high school students held the biggest civil rights demonstration in North Carolina history, and more than 2,000 students from NC A&T and Bennett College participated, with 1,400 arrested in an organized attempt to overwhelm the jails. We will see if the current wave of protests grows to parallel that historic moment.

On May 30, 2020, around 200 protestors took Elm Street again for a peaceful — but impassioned — demonstration before walking several miles to occupy Interstate 40. Traffic on the freeway was shut down in both directions for more than an hour, while still more people gathered downtown. Just as in the 60s, the protestors occupying the freeway were mostly young people, primarily students or recent graduates from the local universities. The majority were Black and Brown, although white allies tried to maintain a human wall at the front and rear lines. Later, protestors returned to downtown, with a group of around 300 congregating on Elm Street as night fell. The primary rallying point was the International Civil Rights Museum, which sits on the site of the former Woolworth’s and contains sections of the original lunch counter.

As it got later, the composition of the group shifted as families went home and more millennials and college students took to the streets. The tactics of the police also shifted. At first, they had been conciliatory, offering food to protestors and a bus to transport people back from the highway. Later on, they donned their riot gear and began using pepper spray, pepper bullets, and tear gas without warning. Shrapnel from stun grenades cut into flesh. A white supremacist tried to run people down in a car, and someone — who both the protestors and the owner of the building agree was likely a right wing saboteur — broke a window of the Civil Rights Museum. After the police became openly aggressive, the protests began to fight back. Several other buildings, including the Lincoln Financial Group, were damaged and graffitied, and at least one building– rumored to be the Greensboro courthouse– was set on fire.

May 31 followed a similar pattern of uneventful multi-generational protests during the day followed by police repression of the youthful vanguard at night. The crowd had grown to around 500-700 people, and police used their riot shields to herd the crowd in the direction of a truck full of armed white supremacists who were terrorizing the protestors on the street. When a group of protestors took down the license plate and tried to make a report, the police — unsurprisingly —  did nothing. Police again used tear gas, pepper spray, and pepper bullets, and once again, no property damage occurred until after the police repression began. On June 1, the mayor instituted a curfew, but protests still lasted into the night, with the local LGBTQ+ center and a downtown art museum offering their spaces and resources as shelter and medical stations.

Greensboro police are now claiming they never fired any pepper bullets and have only used one canister of tear gas since the protests began, but residents spent Wednesday afternoon collecting and documenting evidence to the contrary, including bullet casings and used canisters.

Nine days after the A&T Four began the sit-in movement, students at St. Augustine’s University and Shaw University — the two HBCUs in Raleigh — began planning their own protests. Two months later, the Southern Christian Leadership Conference hosted a conference at Shaw University, where Shaw students formed the Student Nonviolent Coordinating Committee (SNCC). SNCC was the group responsible for organizing events such as the Freedom Rides and the Mississippi Freedom Summer, as well as many smaller actions. In May of 1963, over a hundred students from Shaw were arrested during protests sparked when a Liberian Ambassador to the United Nations was denied service at a restaurant. This past weekend, the same urgency and dedication to fighting racism was present in downtown Raleigh once more.

The first night of protests in Raleigh saw more police repression earlier in the evening than in Greensboro. Multiple people have attested on social media that the demonstrations had been entirely peaceful until the Raleigh police began launching tear gas canisters at the crowd. Then, as in Greensboro, the crowd’s anger boiled over. According to those listening to police scanners, officers were authorized to use lethal force.

The protests — and property damage — centered around the State Capitol building, which housed the NC State Legislature from 1792 until the original building burned down in 1831, and then again from 1840 until 1963. Now, it houses the offices of the governor and the lieutenant governor, so its significance as the state’s center of power has scarcely shifted. The State Capitol grounds also houses several Confederate monuments celebrating the women of the Confederacy, veterans of the Civil War, as well as monuments to the three U.S. presidents born in North Carolina: Andrew Jackson, who implemented the Trail of Tears; James Polk, who started the U.S.-Mexican War; and Andrew Johnson, who was an open white supremacist and opposed the 14th Amendment guaranteeing equal protection under the law for all people. Even though Governor Roy Cooper explicitly affirmed that “People are more important than property. Black Lives do Matter” on Sunday morning, his office building is nonetheless a monument to white supremacy in North Carolina.

On Sunday night, protests in Raleigh continued, with at least seven arrested and tear gas and flashbangs deployed once more. The mayor declared a curfew for Monday night, and the Raleigh Police issued a statement warning people not to bring weapons to or near the protests, despite the fact that no such statement was made when armed right wing protestors challenged the state’s Covid-19 lockdown rules earlier this month. Additionally, despite his words in support of the cause, Governor Cooper has nonetheless authorized use of the National Guard for “cities that request them.” Whatever Cooper may say, he is still upholding the legacy of his office building.

Like Raleigh, the sit-ins spread from Greensboro to Fayetteville about a week after they began, when students at Fayetteville State Teachers College (now Fayetteville State University), planned a sit-in at their own local Woolworth’s. However, Fayetteville’s real civil rights claim to fame came in 1963, the same week that students in Greensboro and Raleigh staged their own large anti-segregation actions. On May 22, more than a thousand students gathered in downtown Fayetteville, although smaller demonstrations occurred each day beginning May 18.

On June 11, the first mass arrests were made, and the demonstrations continued to grow in numbers and community support after that. On June 12, a number of high school students joined their college counterparts, and on June 14, about 150 demonstrators held a sit-in on the floor of J.C. Penny. More than 140 people were arrested by the end of the night. The demonstrations continued through the end of the year, and local government officials and white businessmen continued making concessions under the sustained pressure until all of Fayetteville was effectively desegregated.

On May 30, protestors targeted a building from a different part of history: Fayetteville’s “Historic Market House,” which housed the NC State Legislature before the capitol moved to Raleigh and was the site for the city’s slave auctions until emancipation. The market’s unusual architecture of an open arcade (where the slaves were sold) on the ground level with a meeting room above (where the state legislature met) is an appropriate symbol for how the U.S. and all of its subsidiary states are built on the backs of the slave trade.

The struggles in each of these three cities in the 1960s and 2020 have focused on different issues and used different tactics, but they are all part of the same fight against systemic, state-perpetrated racism and violence. Segregation was an explicit legal mechanism, but the same patterns of horrendous police and lynch mob brutality against Black people occurred then as they do today. For example, Carolyn Bryant made up a lie about Emmett Till for a laugh, which resulted in his murder, and Amy Cooper was recently filmed threatening to call the police on and tell lies about Christian Cooper. The details are different, but the protests of 2020 are part of the same struggle as the civil rights movement– the same fight. The protestors in North Carolina should continue to organize themselves and dig into the histories of their predecessors to learn from their successes and strategize about how to adapt these tactics to the present situation. The civil rights demonstrations in North Carolina successfully desegregated businesses in their cities and made headway on other issues such as the de facto segregation of their schools, yet there is still— clearly— much work left to be done.