Workers at St. Mary Medical Center outside Philadelphia went on strike Tuesday morning, demanding safe staffing ratios to confront the growing numbers of Covid cases in Pennsylvania. Why are the bosses cutting staff and refusing to hire enough nurses during a pandemic? 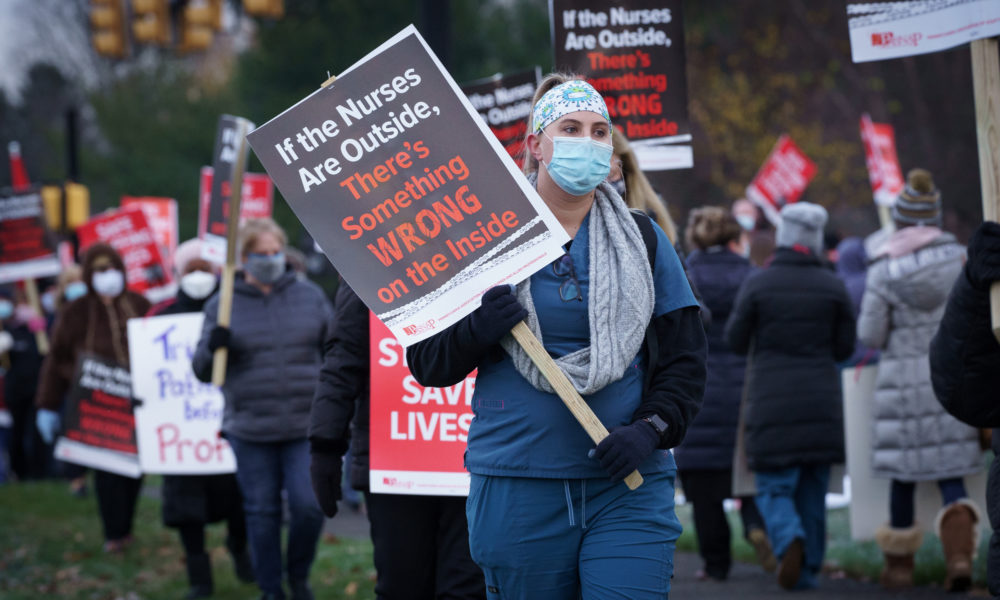 Today is the second day of a planned two-day strike at St. Mary Medical Center in Langhorne, Pennsylvania, a suburb of Philadelphia. The nearly 800 nurses who walked out Tuesday morning are members of the Pennsylvania Association of Staff Nurses and Allied Professionals (PASNAP), having won union recognition last fall. They are striking for their first contract and, importantly, for safe staffing ratios that would establish a maximum number of patients for which each nurse is responsible. This demand, vital for healthcare workers across the country pre-Covid, has become an even more critical necessity during the pandemic.

The bosses, Trinity Health System, used the opportunity of the economic downturn at the start of the pandemic to lay off administrative and housekeeping staff. Cutting labor costs and squeezing the remaining workers is a tried-and-true method to increase profitability. Some 350 workers — or 12 percent of the workforce — were furloughed in April, which dumped more clerical and even sanitation tasks on already overworked healthcare workers. The work of nurses affected by coronavirus who had to take medical leaves or care for sick family members had to be absorbed by those still on the job.

Trinity, one of the country’s largest healthcare companies, owns 90 hospitals in 22 states, including five in the Philadelphia area. St. Mary alone has brought in around $58 million in profit each year for the last three years. The company has more than enough to hire needed staff and settle the strike, but instead has retaliated by locking out the nurses until Sunday, claiming it needs time to switch out the replacement nurses.

At Mercy Fitzgerald Hospital, another Trinity facility in the Philadelphia area, 260 nurses had authorized a strike and given the required 10-day notice, but there a deal was struck. Their first contract includes more on-call nurses and a 3 percent raise each year for three years, followed by a 4 percent raise in the final year. This is nowhere near adequate for essential workers in the midst of a historic health crisis.

PASNAP-represented nurses at two other hospitals in Philadelphia — St. Christopher’s Hospital for Children and Einstein Medical Center — also voted to authorize strikes but have not yet given their 10-day notices. At Einstein, negotiations for a new contract have been ongoing for more than a year. The new owners of St. Christopher’s, Tower Health and Drexel University, are not honoring the paid time off accumulated under the previous owners, who went bankrupt — the same bankruptcy that closed Hahnemann Hospital.

Pennsylvania is seeing nearly 5,000 new Covid-19 cases a day, and the pandemic is set to get even worse in the winter. Only in a backwards system like capitalism would hospitals go bankrupt, close, and not even be reopened during a health crisis. That workers must strike for even the most basic staffing requirements to confront a crisis like coronavirus is a testament to the inadequacy of the private health system. Under capitalism, hospitals are run for profit and make decisions based on profit maximization rather than what is needed to keep people healthy and cure the sick.

The strike at St. Mary shows one way to fight back. But with four hospitals and more than 2,500 PASNAP nurses having voted to authorize a strike, the question remains: Why did the union leadership separate the struggle? Surely a larger strike is a stronger strike, and the need for better ratios is felt throughout the healthcare sector. Confronting the pandemic requires ever more audacity.