Not Going Back to Brunch

Public sector workers across multiple unions gathered on Inauguration Day to send a message to the new Biden administration that we must rebuild and fully fund our schools, our hospitals, our social programs, our transit system, and our city. 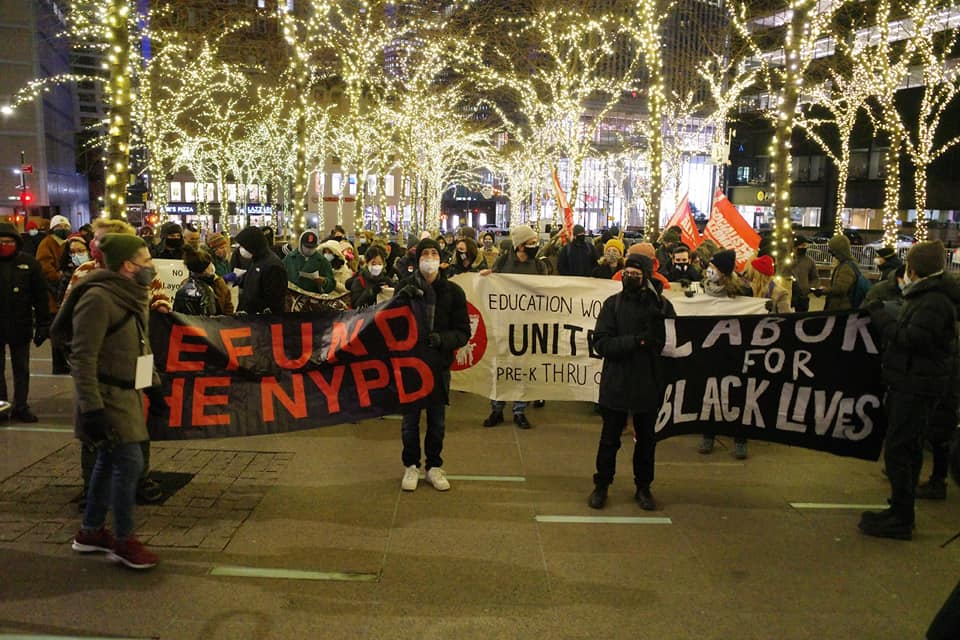 It’s not too often that you get nurses, social workers, teachers, professors, and transit workers together in a Zoom call, let alone for a political demonstration. But given the rise of austerity policies and cuts to the public sector over decades, and in the wake of the mass protests over the summer of 2020 which underscored the urgency of investment in communities rather than cops, such a network feels natural and inevitable. A cross-section of public sector workers began gathering over Zoom and holding public webinars in Fall 2020, building to a protest and march on Inauguration Day in Zuccotti Park in Manhattan, marking what we hope will become a new era of labor activism and power.

Funneled through our immediate demand to tax the rich is a vision of a completely renewed society that serves the interests of working class people: investment in community services that rely on care rather than punitive measures, support for Black lives and Black Trans lives with a defunded and ultimately abolished police force, renewed infrastructure for public transportation with strong wages and benefits for subway and bus operators, affordable healthcare within a system that values hospital nurses and staff, and a holistic educational program that serves the public good and fully funds education workers from K-12 through college. Few union leaders were present at this rally, which was instead organized by a circle of dissident rank and file caucuses working to reform their unions internally — groups such as Local 100 Fightback within the Transport Workers Union, which represents the MTA, the Movement of Rank and File Educators (MORE) within the UFT, which represents the Department of Education, Rank and File Action (RAFA) within the PSC, which represents the City University of New York, and DC 37 Progressives with in DC37, which represents public servants and civil service titles. Resources and support from the DSA Labor Branch and other branches of the NYC-DSA were vital in bringing these groups together.

With the return of the Democrats, some liberals may be “going back to brunch,” but rank and file members of unions simply can’t afford to. Public sector workers were threatened with 20,000 layoffs and forced to provide $1 billion in givebacks that were stolen from promised back pay and benefits. Governor Cuomo cut state Medicaid funding by over $2 billion. Near the end of 2020, a now tenuously deferred “Doomsday Budget” threatened to ravage the public MTA subway system by firing 9,000 workers and increasing transit fares by $1. Primary school educators have been forced to return to unsafe working conditions in the midst of a pandemic, with a highly contagious variant of COVID on the loose and a shoddy and inconsistent vaccine rollout. Meanwhile the state education budget remains frozen, and the City University of New York continues to increase tuition for its majority Black and Brown working class students while depreciating the quality of education by relying increasingly on underpaid and temporary adjunct professors for instruction.

One of the many diverse and compelling speakers at the J20 march was Hannington Dia from the MTA: “The MTA lionized us, they campaigned for us. They said you’re the heroes, you keep New York City running. We see it in the stations, we see it in the Oculus, we see it all over. They’re romanticizing us as heroes. You’re the horses that pull the carts that keep the city running. But despite that, you did not give us proper PPE […]  You ignored us, while simultaneously pretending to care about us, and now 131 of us have died.”

“We’ve lost at least 500 city workers to this virus. We’ve risked our lives to save others – getting people to the hospital, caring for them, educating them, and overall keeping this city running. Billionaires have sat in their suburban mansions and cashed in. We will not stand by silently while the rich benefit from years of tax breaks while our budgets get drained and our services destroyed.”

The rally and march through the streets of the Financial District on a bitingly cold winter evening in January rang with chants for worker and union power, while the normal phalanx of cops lurked in the sidelines. All who gathered hold that the transition of government power back to Democratic control cannot signal a return to apathy or apoliticism. Daniel Kroop of the newly formed Association of Legislative Employees (ALE), the NYC Council union remarked in his speech “We can’t live off promises or America ‘healing.’ We need real change.” Organizers from RAFA and MORE held a shared banner highlighting continuity between the struggles facing K-12 and college workplaces and their unions. Also present was a representative from NYCHRP (New York Committee for Human Rights in the Philippines), who reminded us that immigrant and undocumented workers are often on the front lines of COVID and completely sidelined in discussions of labor and representation.

Mary Maddox from MORE gave a rousing impromptu speech: “Students, if you’re mad because your teachers are tired, and they can’t serve you and can’t give you the attention that you want and you need, we’re sorry. We’re doing our best with less than nothing. If you’re mad look up,” gesturing toward the UFT headquarters building. “Look up at Mulgrew, look up at de Blasio, look up at Cuomo, look up at these billionaires who have more money than they could ever spend.”

Speakers and posters also praised and expressed solidarity with the 1400 striking workers at Hunts Point Produce Market, who walked off the job to demand a paltry $1 an hour raise and stronger health coverage, and are facing repression by police while out in the winter cold.

While union density in the US as a whole hovers depressingly in the single digits, the percentage  of public sector workers in New York State that are unionized is over 66 percent, which means that the workers and services on the chopping block have union representation. This substantial majority also means that unions have the capacity to bring the normal functioning of the city to a grinding halt through coordinated strikes, once they truly allow the rank and file to lead. Unfortunately, public unions in New York have been loath to use their full power to protect themselves and the communities around them. But the rank and file organizers of this march are working to change that, building power within their workplaces and dissident caucuses within their unions, and are now organizing increasingly across sectors to make sure that the current crises are not resolved at the expense of the working class. More than just staving off the worst of the cuts, we are beginning to envision what a fully-funded public sector could mean for people who have witnessed nothing but the bare minimum for far too long. The credible threat of a strike is a shift in the right direction and one that will hopefully continue to spread.

The economic, political, and social situation in America was dire even before the inept ruling class response to the pandemic devastated working families. And the political response of those in power across city, state, and federal levels has been consistently inadequate for the scale of the problem. In the face of a possible eviction wave, rising unemployment, accumulating personal debt, depleted savings, and other signals of a dire economic landscape, the state has given multiple signs that they will continue to make drastic and substantial cuts to essential public services to maintain a balanced budget — a trend that will not be remedied with the new administration without unflinching public pressure and formidable worker power.