Joe Biden is repulsive: a racist, capitalist, imperialist. Today, Sanders papered over their many differences to give a full-throated endorsement. What does this mean? 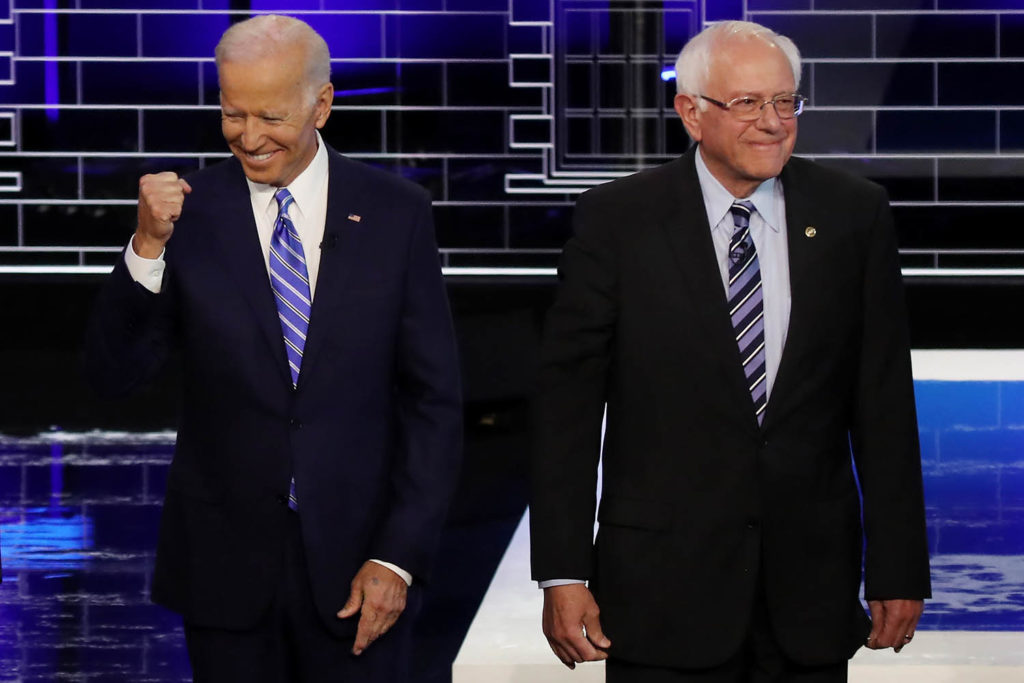 Joe Biden is a repulsive character: a racist, misogynist, imperialist who carries the responsibility for the overcrowded death boxes that prisons have become. And he is also being accused of sexual assault by a former staffer.

And earlier today, Bernie Sanders endorsed Joe Biden.  It wasn’t a timid endorsement; it was full fledged personal and political endorsement, with gems such as these:

“Your endorsement means a great deal. I think people are gonna be surprised that we are apart on some issues and we are close in a whole bunch of others.”
— Joe Biden

According to the livestream, their bitter debate battles were diminished to Biden saying (and Sanders nodding in agreement) that they “don’t disagree in any substantive ways.” And Joe Biden, a war criminal, a racist, and an accused sexual assaulter, is Bernie Sanders’s “good friend.”

Biden made clear rhetorical overtures to Sanders’s base, talking explicitly about young people and unions. But in terms of concrete policy, Biden hasn’t really moved at all.

Biden made only small concessions to Sanders’s base: he promised debt forgiveness for public colleges, a $15 minimum wage, and a slightly lowered retirement age, but he said nothing about Medicare for All — one of Sanders’s main campaign promises. In fact, Sanders didn’t even mention Medicare for All. This endorsement comes as an almost explicit betrayal of everything that Sanders had run on.

This betrayal is particularly egregious in the midst of a horrible pandemic that has killed 23 thousand and left well over 16 million people unemployed — and that doesn’t even count undocumented people. Joe Biden has been hiding away at home throughout most of the pandemic, and he has only put forward only a tepid plan to combat the current crisis, without policies to address the increased misery of the working class and the oppressed. Instead, during the livestream, Biden defended the disgusting corporate bailout, saying it was a “good plan” with bad oversight. Bernie Sanders responded, “Joe is absolutely right. Among many other provisions, we put in there — wasn’t my first priority by any means — 450 billion dollars for large corporations…”

Sanders refused in the livestream to even denounce the billion dollar corporate bailout, opting for the it “wasn’t my first priority” approach. Of course, Sanders did vote for this bill a few weeks ago, but he made it clear at the time that he was holding his nose to vote because it didn’t do enough for working class people. Even that fiery rhetoric is entirely gone now, and Sanders espoused the Pelosi-Biden line that the primary issue with the massive corporate bailout is the lack of oversight.

To make the endorsement worse, Joe Biden is among the most repulsive candidates in the Democratic Party, if only because he’s had decades in Congress for us to know exactly who he is and what he is about. He wrote the 1994 Crime Bill that helped create mass incarceration, voted for the war in Iraq, pushed for Obama’s drone program, and to this day — even in the midst of a pandemic! — opposes Medicare for All. While the Supreme Court is often cited as a key part of the “lesser evil” argument, it was Biden that helped confirm Clarence Thomas and silenced Anita Hill. He also fought against integration, supported Obama’s immigration policies, and was a proponent of the corporate bailouts. Joe Biden is among the most right-wing figures in the Democratic Party. And Bernie Sanders just endorsed him, with no criticisms of Biden or of the Democratic Party establishment that put their thumbs on the scales to ensure Biden’s victory.

The lesser evil argument has been a way to pull progressives to the right for decades: to accept more and more concessions, to accept worse and worse policies for the sake of electability, all for the sake of keeping the Republicans out of office. It keeps progressives from clearly stating that the disaster we are in is the direct result of the policies of both Democrats and Republicans: of the austerity measures put in place by people like Governor Cuomo, as well as Donald Trump. They are both parties of and for the capitalists and who are very literally leaving working class people, and especially working class people of color, to die in the midst of the pandemic. The lesser evil argument is a dead end, as it keeps progressives from fighting for what we really want and building a force that can achieve it. But to be honest, it’s a hard sell to even say that Joe Biden is Trump’s lesser evil.

Sanders choosing to support Biden is disappointing but not surprising. For the entirety of the campaign, Sanders had promised to support whoever the nominee was. He said this countless times, including at a debate. This meant that Sanders was willing to endorse, campaign, and vote for any of the candidates who ran for President, including Michael Bloomberg, Pete Buttigieg, and Joe Biden. This is the same song and dance that Sanders did in 2016: he ran as a left pressure, fought against the establishment, and then caved and bent the knee to the candidate who beat him. So, although it was difficult to watch and although the over-the-top faux friendliness couldn’t have necessarily been predicted, we all knew this day was coming.

But this address was even to the right of Sanders’s speech announcing the end of his campaign. At least there, his characteristic “not me, us” mantra played a central role. Sanders continues to claim that he built a movement, one that would remain active to push for the reforms needed. But just days later, Bernie Sanders forgot all about “not me, us” and called on his followers to vote for Joe Biden in the midst of a pandemic that is taking the lives and livelihoods of working class people. And like a slap in the face, it was Joe Biden who said, “Not me, us. That’s your phrase, pal.” There was no call for Sanders’ supporters to mobilize to fight against the “shock doctrine” response to the pandemic, only to vote to defeat Trump. There was no discussion of Medicare for All or Sanders’s progressive emergency COVID-19 response plan. It became “not me, Biden.”

Sanders isn’t a socialist; he’s a New Deal liberal, so we can’t expect much better from him. But we can and should expect much better from socialists, who want an entirely new kind of society free of all exploitation and oppression, who want to expropriate capital and workers’ democracy. That means we should expect more from not only the DSA, which retooled its organization to become a Sandersist electoral machine, but also Socialist Alternative and the Party for Socialism and Liberation (PSL), both of which supported Sanders. These groups knew what Sanders would do — lead progressives right back to Joe Biden and cynically still call on working class people to trust and vote for him.

These organizations are not calling for a vote for Joe Biden; even the DSA, despite pushback from some sectors of membership, voted for a “Bernie or Bust” resolution at their convention and tweeted that they would not endorse Joe Biden. This is good, but not good enough.

Now is the time for organization and class struggle. Workers are already fighting back — walking off the job, going on strike, and demanding that their workplaces give them the proper protective equipment and manufacture the much needed supplies for healthcare professionals. The working class is being heroic, with GE workers demanding to produce ventilators and retired healthcare workers coming back to their jobs.  On Thursday, nurses are doing a national day of action to demand PPE and the nationalization of health care. Jacobin writer Daniel Denvir argued for retooling the Sanders campaign apparatus to engage in activism. What we need to do is retool our groups to become the weapons of class struggle to fight against those who have always been our enemies: the Democrats and the Republicans. We need to be a part of class struggle and advance class struggle; it’s quite literally a fight for our lives.

However, we also need to take political conclusions. We’ve tried the strategy of reforming the Democratic Party (again and again and again and again), and it always ends with the left-wing hope endorsing the right-wing victor. Bernie Sanders betrayed his supporters and endorsed Joe Biden. This is always where Sanderism was going: straight to the Democratic Party establishment. After the coronavirus pandemic, nothing will be the same. We can’t go back to normal. So, we need a new party, and we need it now: a workers’ party, independent of the capitalists, that fights unrelentingly for each reform, as well as for a socialist future.