Schools in New York City have been open for just four days. The kids aren’t even in the classroom yet and 55 people have already tested positive for Covid-19. Teachers across the city organized pickets protesting against unsafe reopening of NYC schools. 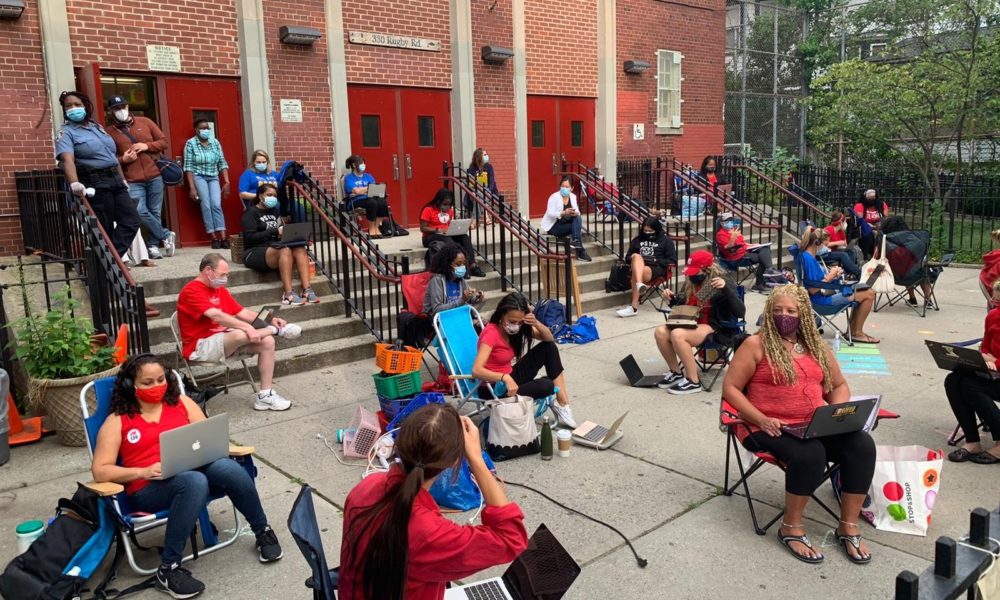 In the four days that New York City teachers and staff have been back at work at public schools across the city, 55 people have already tested positive for Covid-19. These cases are spread across all five boroughs (as of 10am on 9/14/20), and they represent the teachers and staff infected before even a single student has arrived for instruction. This morning pickets sprung up at several schools for a day of action organized by the Movement of Rank and file Educators (MORE), the social justice caucus of the United Federation of Teachers (UFT). At PS 139 in Brooklyn, where a staff member tested positive on Friday, MORE members, parents, students, locals from the community, and DSA members gathered together in support of the teachers, who were working outside the school in protest of the clearly unsafe reopening. School safety officers, temperature readers in hand, scanned the foreheads of anyone entering the building.

This day of action comes on the heels of a September 1 deal between the Department of Education (DOE) and UFT leadership that was struck without input from rank-and-file teachers, who were shocked to learn the threat of a strike vote had been taken off the table without their consent and that they were expected to return to work in person on September 8. New York City is the only large urban public school system returning to some form of in-person learning this fall, despite calls from teachers and parents alike to begin the school year with fully remote learning. This deal, struck by UFT President Michael Mulgrew, is a complete betrayal of the rank and file educators working on the front lines.

In front of several media outlets, UFT chapter leader Megan Jonynas read the statement written by the PS 139 community, addressed to Mulgrew, DOE Chancellor Richard Carranza, and Mayor Bill de Blasio. (Mulgrew was expected to be in attendance outside the school, but failed to show.) The statement focuses on a lack of staffing: both custodial, to properly clean and disinfect the schools, as well as teachers, who are expected to teach in person and online at the same time.

The statement also expresses concerns about a lack of transparency and guidance from the city when it comes to handling safety protocols and PPE distribution when schools reopen for in-person instruction on September 21. “Gyms and restaurants preparing for indoor dining have more safety guidelines than schools do,” one teacher said. “I would love more than anything to be teaching in front of my students. I hate remote learning. But I also don’t want a second wave of Covid,” added another. Public schools lack access to the resources for health and safety that wealthy private schools, like PolyPrep, can purchase. While PolyPrep has a rapid-test machine to test anyone who enters the school building, as well as contact tracing sensors, underfunded public schools are still waiting on sufficient basic PPE.

Before the teachers began their outdoor work day, community supporters participated in several chants, including “safe schools now,” “not until it’s safe,” and a modification of a popular street protest chant: “1. We are the people 2. Say it louder 3. We want safety 4. our students.”. The fundamental demand of “safety” has been overlooked by the DOE and UFT leadership in their deal, only vaguely addressing the concern of ventilation in old buildings with “ventilation checks,” which have not proven very thorough thus far.

This morning, Mayor de Blasio addressed the 55 positive tests by saying, “Some people will test positive. And those folks will immediately get support. After two weeks, those professionals will come back to work — and they’ll complete the entire school year.” The mayor fails to take into account how one case may spread to others in the confined space of a classroom, or how those who test positive will be affected in their home life, outside of the work environment. Studies continue to show the long-lasting health impacts of Covid, and those impacts are experienced at higher rates among poorer communities where people live most densely. Mayor de Blasio’s response dismisses the very real health risk that public school teachers and staff, as well as students and their families, are facing as we are one week away from a partial return to in-person learning. His entire focus is to get the working class back to work, regardless of safety or health risks.

School reopening advocates (in addition to the mayor) have argued that getting kids back in school will make it possible for parents to head back to work — prioritizing profits over safety. The Department of Labor has stated that parents whose children have access to in-person learning are no longer eligible for paid leave. This places an additional financial burden on working families. While the Mayor suggests that the majority of families want to return to in-person learning, the system is set up to make that the default: families must choose to opt-out of in-person learning, rather than opt-in.

This creates greater opportunity for health risks to teachers and students (and therefore family members) alike, leaving working class families at the mercy of the DOE. It is the responsibility of all working-class New Yorkers to stand in solidarity with the teachers and staff of public schools in demanding fully remote learning until safe reopening conditions are properly established.